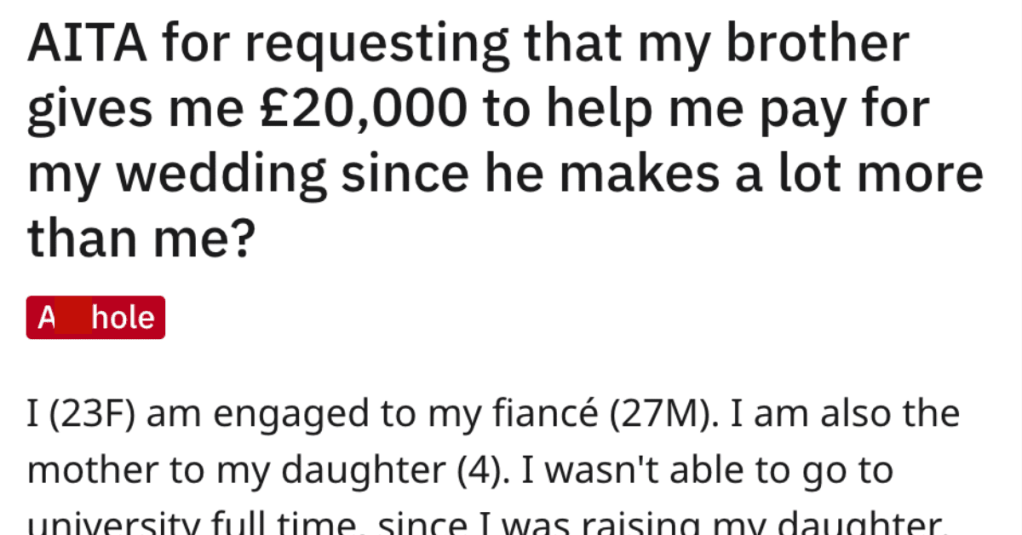 Bridezilla Demands Her Well-Off Brother Finance More Of Her Wedding. Is She Wrong?

Y’all, have the brides-to-be of the world learned nothing from the past decade of people shaming brides behaving badly?? Somehow, the industry that has convinced brides that it’s “their day” has also convinced them this means they’re allowed to do and say what they want no matter the cost to the relationships around them.

This bride took to Reddit thinking she would find some support for her own rant regarding her wedding.

She’s struggled to make ends meet after having to finish school while raising a child she had at a young age, but things are coming together as she finishes a degree and her fiancee has a good job, as well.

Her brother and his wife make good livings as doctors, and since they’re not wanting kids, they’re able to save a lot of it, too.

I (23F) am engaged to my fiancé (27M). I am also the mother to my daughter (4). I wasn’t able to go to university full time, since I was raising my daughter. However, I am currently studying history online, where I will hopefully be able to become a history teacher.

Balancing studying while raising my daughter hasn’t been easy, however, having my fiancé supporting the family has really helped, since my fiancé works in a research lab. We have enough money to live comfortably, but saving up money to have our dream wedding would take years.

I don’t mind the fact that they both have kids, but they have been able to save a lot of money due to this.

So, naturally, OP thought her brother should kick in some cash to cover the wedding she wants but can’t afford.

Recently, I asked my brother if he would be able to help pay for my wedding, since having him contribute to my wedding would help make it a magical moment for me. My brother offered to give me £5,000 towards my wedding, which honestly surprised me.

I might be wrong here, but surely as a hospital doctor, my brother should be able to contribute more to my wedding. I told him that I’d really appreciate it if he could give me £20,000 for my wedding, since it would really mean a lot, but he refused.

OP got upset, telling him he can afford it and she can’t, so if he doesn’t pony up he won’t be invited.

I’d be lying if I said I didn’t make my annoyance with my brother clear, and I told him that his refusal to help pay for my wedding is selfish, and that if he doesn’t help contribute to my wedding, then he won’t be able to come, since it isn’t my fault that I don’t a lot of money to fund my wedding.

We had an argument afterwards, and I haven’t been returning his calls since. The rest of my family is helping to contribute to my wedding, which makes his refusal even worse.

She doesn’t understand his refusal, since the rest of the family is helping out.

Her father thinks she’s being too rough on him, and that his feelings might be hurt, but she’s sure she’s “missing something.”

Despite my brother’s actions, my father thinks that I’m being too harsh on my brother, and that me not inviting him to my wedding would be upsetting for him. Am I missing something here?

This will be fun.

They’re honestly wondering how anyone could actually be this unaware.

But apparently, this is a real thing that happens way too often. 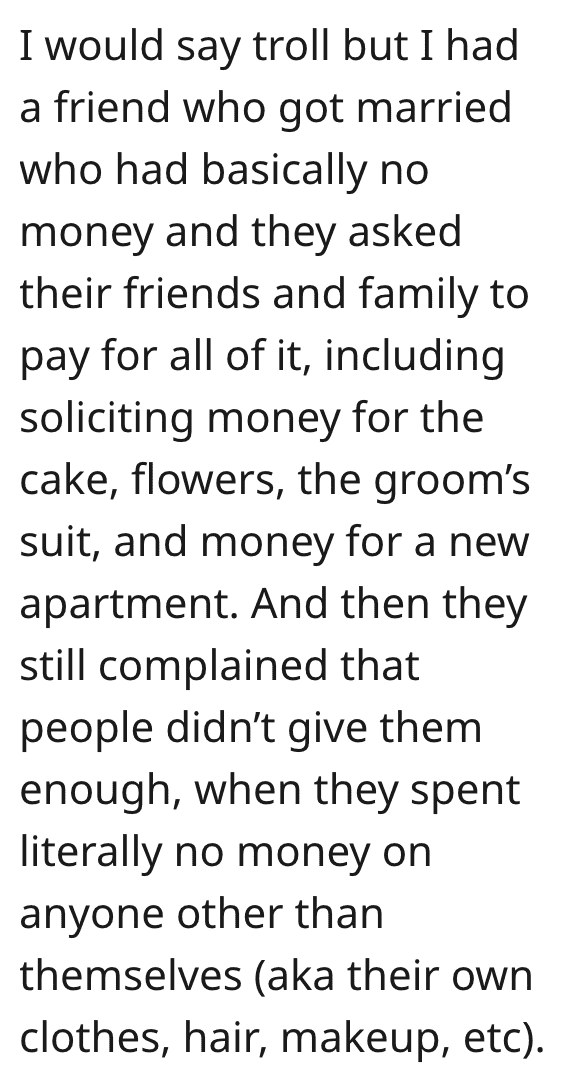 There were plenty of people going off about how much money weddings cost in general. 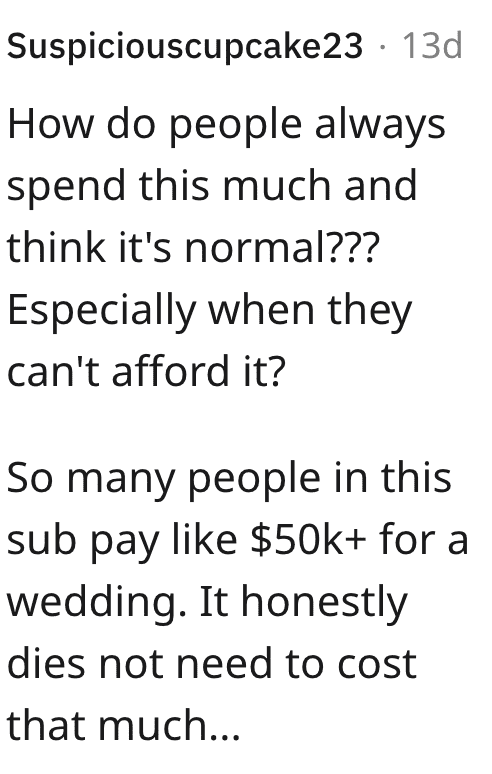 And yeah, it really doesn’t matter how much money her brother makes, she’s not entitled to it. 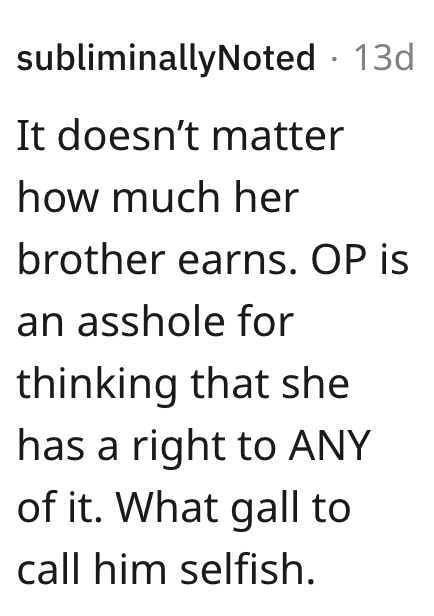 I mean…you can’t argue with that. 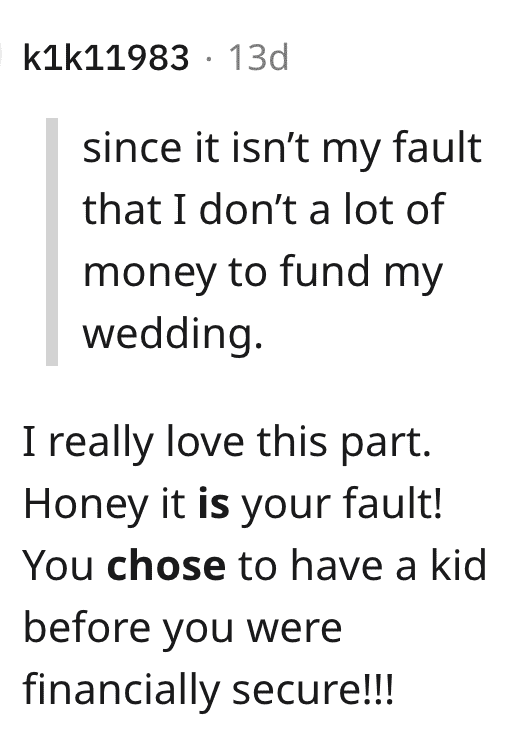 Y’all, I actually think I would feel better if this WAS a troll, but this kind of thing is way too real.

Have you known a bridezilla in your life? Tell us what it was like in the comments!