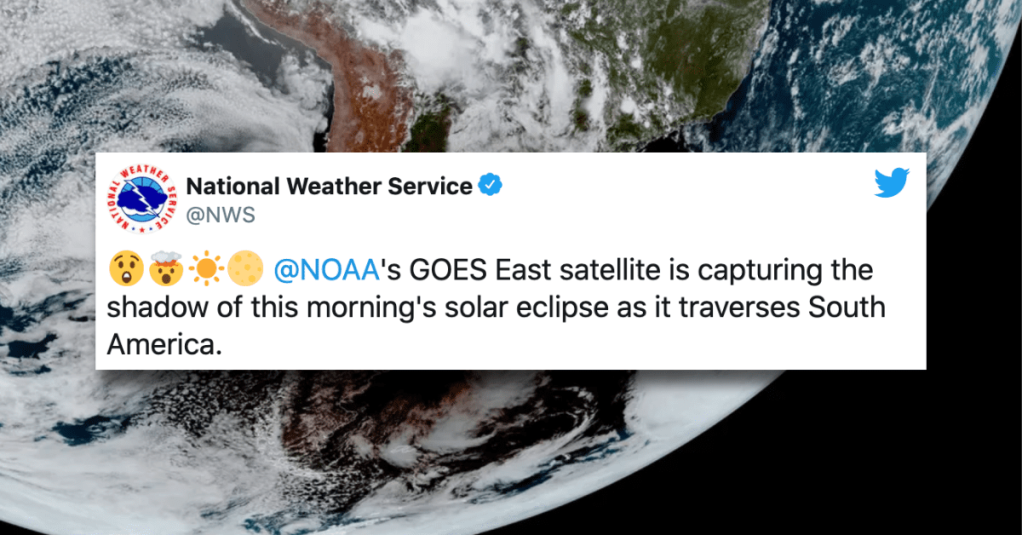 Calling all space and science fans, here’s a clip that’s sure to start your day off right.

The NOAA’s GOES East Satellite just captured this stunning image of a solar eclipse as it moved across South America. The results are sure to absolutely take your breath away.

😲🤯☀️🌕 @NOAA's GOES East satellite is capturing the shadow of this morning's solar eclipse as it traverses South America. pic.twitter.com/HuLGy7iovG

See that little red dot quickly moving across the Earth’s surface? Believe it or not, that’s a solar eclipse in action. In December of last year, folks in Argentina and Chile were lucky enough to witness the only solar eclipse of 2020. As the Moon blocked out the Sun from view, it cast that amorphous burgundy-colored shadow that you see slinking its way over to the southern tip of the continent. Here’s a closer look for you huge space nerds out there.

#SATELLITE SPOTLIGHT: Here's a closer look at today's total #SolarEclipse from @NOAA's #GOES16🛰️. The moon's shadow tracked over the southern Pacific Ocean, as well as across #Chile and #Argentina, before moving into the southern Atlantic Ocean just before sunset. pic.twitter.com/YoO9N36s7c

The most inner part of that dark shadow is what scientists called the umbra, where folks get the full experience of a total solar eclipse. The blurry edges of the shadow make up the penumbra, which only results in a partial solar eclipse for those on Earth down below.

It’s amazing that the NOAA managed to capture this image, considering just how rare it is to see a solar eclipse. The Moon and the Sun have to line up just right for the phenomenon to occur, and even then, a pretty small part of the Earth’s population even end up seeing it. It’s all a matter of being in the right place at the right time.

Thankfully, the hard work of scientists and engineers has made seeing all angles of the Earth super accessible. Now, those interested in the cosmos won’t have to experience any major FOMO.

Have you ever seen a solar eclipse before? Share your experience with us in the comments!