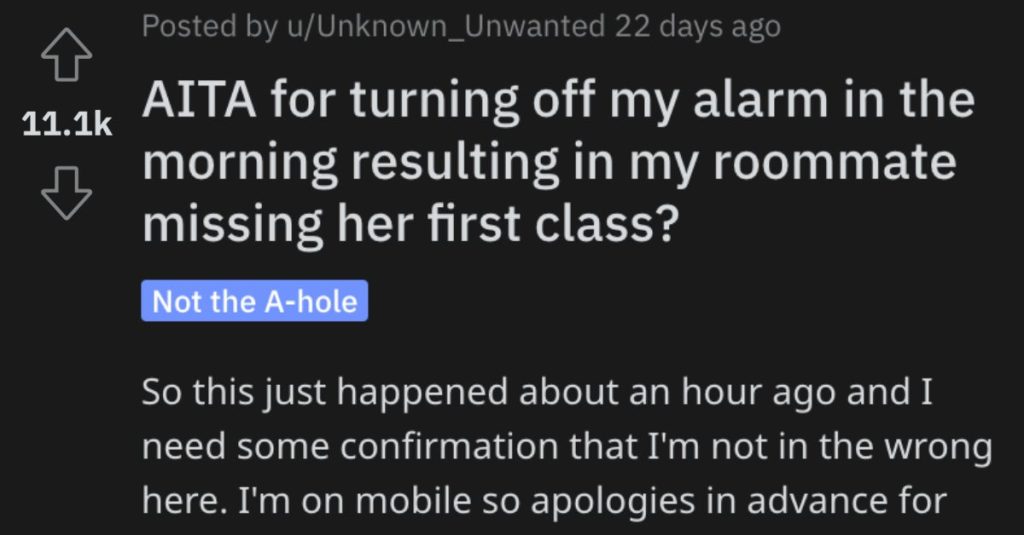 Man, it used to drive me insane when I had roommates and their alarms went off forever and ever…and they didn’t turn them off.

So I can sympathize with what this college student did…

Read the story below and see what you think.

AITA for turning off my alarm in the morning resulting in my roommate missing her first class?

“So this just happened about an hour ago and I need some confirmation that I’m not in the wrong here. I’m on mobile so apologies in advance for formatting.

My (21F) roommate (20F) are living in the same college dorm together. While we don’t share a room, our rooms are adjacent to one another and the walls are pretty thin so we can hear each other pretty easily through them.

My first class on Mondays is normally at 9 in the morning but today I woke up a little bit before my alarm, around 7:45 and checked my email to see that it was cancelled because the professor is sick. Since my next class wouldn’t be until 12:00, I turned off my alarm and fell back asleep.

Around 9:30 I woke up to the sound of my roommate rushing around and being pretty noisy. I knew she had a class at 9:00 too so I was curious as to why she was still here. I got up out of bed and walked out into the hallway between our rooms and saw that she was frantically running around trying to get ready.

As soon as she saw me, she got this scowl on her face and angrily asked me why my alarm didn’t go off. I told her my first class got cancelled and that I wanted to sleep in a little. Then she tells me that, thanks to me, she’s super late for her first class.

Apparently she relies on my alarm going off in the morning rather than setting one herself. I had no idea that was the case and still don’t really understand why she doesn’t have her own alarm set.

I tried to apologize but she was too preoccupied and seemed to be ignoring me. After a few minutes she was out the door and since then I’ve been sitting in bed wondering if I’m really the a**hole here or if she’s only got herself to blame.”

Now it’s time to see what Reddit users had to say.

One person said she’s NTA and that her roommate was trying to blame her for something she did. 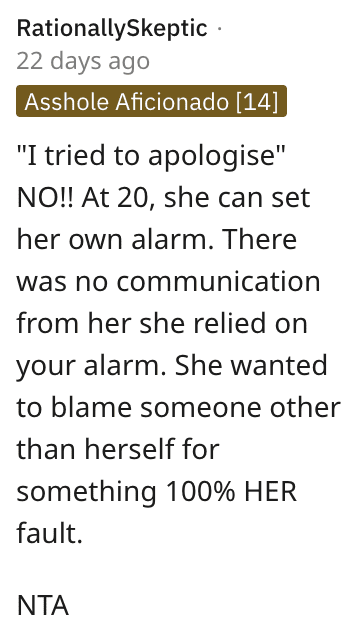 And this individual agreed and said her roommate is a grown woman who can set her own alarm. 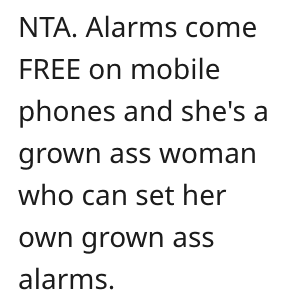 Another reader said she’s NTA and said her roommate’s behavior is pretty bizarre. 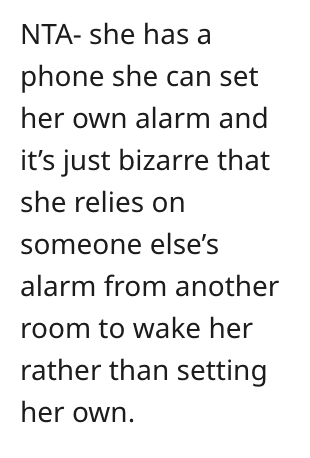