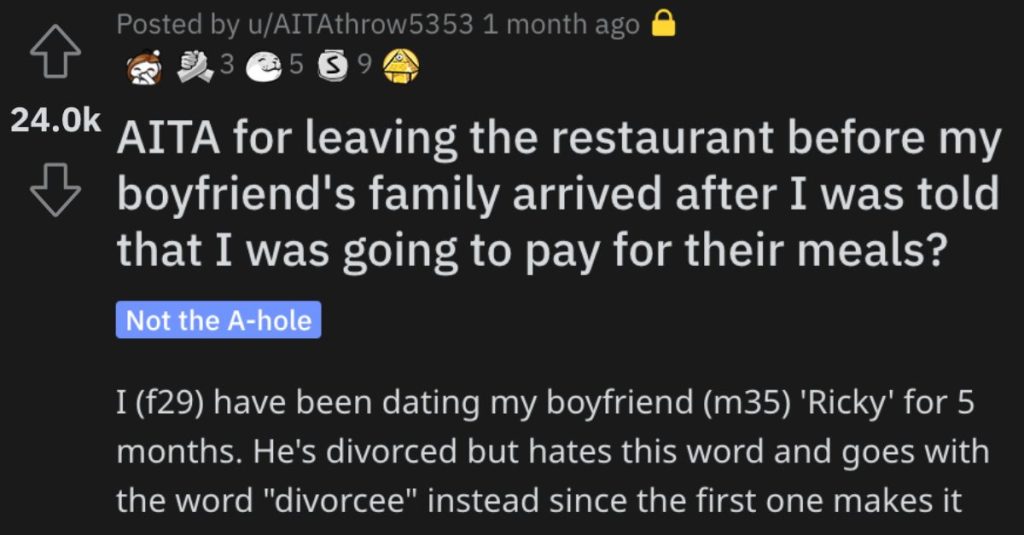 She Left a Restaurant Because Her BF Told Her She Was Going to Pay For His Family’s Meals. Is She a Jerk?

And, oh, by the way, you’re paying…for everyone…

Check out this story from Reddit’s “Am I the A**hole?” page and let us know if you think this woman was out of line for what she did to her boyfriend.

AITA for leaving the restaurant before my boyfriend’s family arrived after I was told that I was going to pay for their meals?

“I (f29) have been dating my boyfriend (m35) ‘Ricky’ for 5 months. He’s divorced but h**es this word and goes with the word “divorcee” instead since the first one makes it sound like he was “dumped” when it was him who initiated it.

Anyways, He always go on long rants about his exes and say stuff like “I hope you don’t have this awful habit my ex has” or “hope you like XYZ cause my ex didn’t” and the list goes on.

I found a 2nd job recently and he’s been having me pay every time we go out. When I protest he’d say he’s going through a rough patch and is seeing how much help I cam offer.

Last night he invited his family to join us for dinner. We got to the restaurant first. He asked me if I “brought” enough momey, I said why and he told me that he told his parents that I’d pay for their meals. I said why would I and he went on about his parents going through a rough patch just like him.

I said “I’m sorry this can’t be a coincidence!” he asked what I meant and I told him that I would not be paying. He insisted, I refused and said no. He then leaned back and said “well, you’re here, so not much of a choice you have anyway” while laughing like it was funny.

I silently got up, took my phone and purse and walked right out. He was shocked he started shouting after me to stop and wait but I didn’t.

I went home and he called me enraged saying that I did a horrible thing walking out on him and his parents, while I could’ve just paid. I told him that their unfortunate financial situation isn’t my problem and that I wasn’t obligated to pay for their food. If they couldn’t pay for their meals, then they should not go out.

He got offended and said and I qoute “you’re making money a priority just like my ex did” then went on about how disrespectful my attitude was and how I made him look small infront of his parents and forced him to lie about why I wasn’t there when they came.

We’ve been going back an forth about it til now. He’s mad and is refusing to speak to me til I apologize. AITA?

I feel bad because his parents are lovely and I been doing my best to keep a good relationship with them.”

One person said she’s NTA and she needs to get away from this guy. 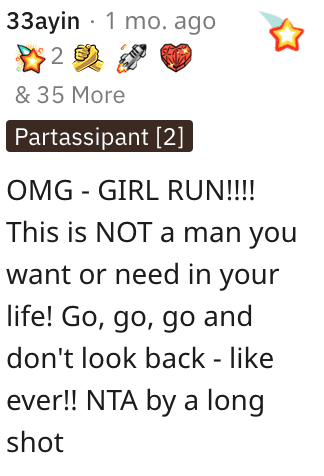 Another individual said she deserves better and this guy is taking advantage of her. 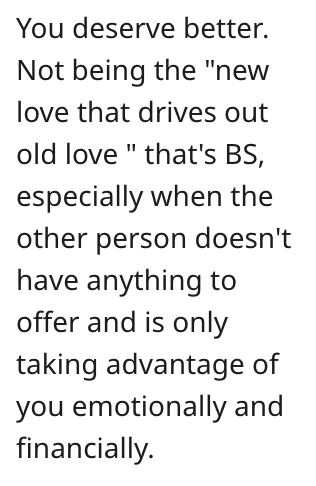 And this Reddit user said there are a whole lot of red flags going on here.