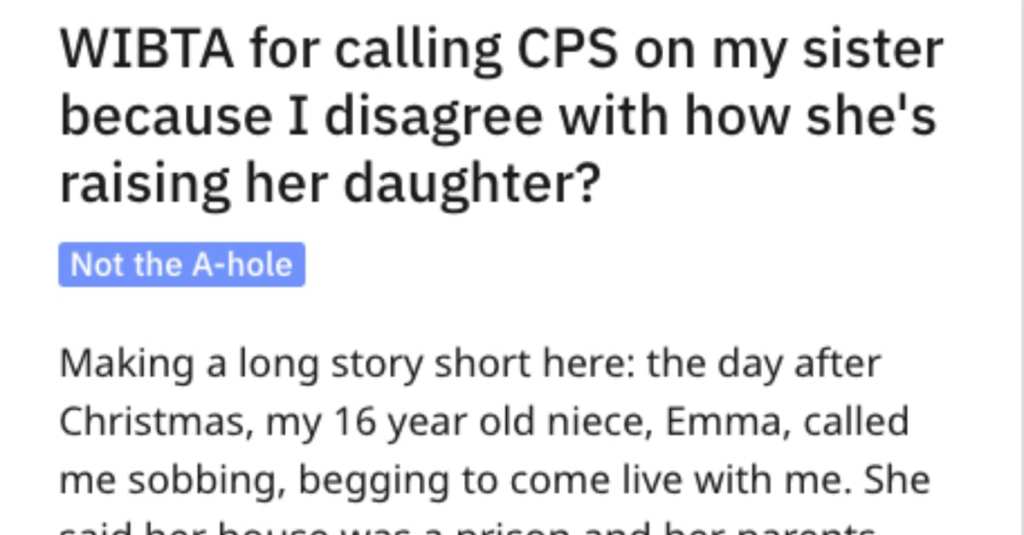 As a mother, I live with the fear that someone could call CPS on me at any time, for any thing. Once that call is made the state has to follow up (rightfully so), and most parents would like to avoid going through that unnecessary scrutiny if at all possible, I think.

So to read that someone is considering bringing in the authorities on their own sister, well…it gives you a funny feeling in your tummy, and not in a good way.

It started with a phone call from the 16-year-old niece, and OP did confirm with her sister that what was said was true, because you know how teenagers can be dramatic.

Making a long story short here: the day after Christmas, my 16 year old niece, Emma, called me sobbing, begging to come live with me. She said her house was a prison and her parents wouldn’t let her be happy anymore. We talked for a while and what she told me was confirmed as true by my sister when I talked to her.

The niece was recently diagnosed with ADHD and is struggling to keep up at school. Her father, especially, is adamantly against her taking meds for the conditions for fear of her “getting addicted.”

Emma has always had lopsided grades, with As in English and history but Cs and Ds in math and science. This time last year, she was diagnosed with ADHD, which I knew because I was diagnosed a few years ago and my sister called me to ask my opinion on how well non-medication treatments worked, since her husband was adamantly opposed to letting Emma take what her doctor prescribed for fear of her becoming addicted.

Medication and intuitive living has always worked best for me, but when I was pregnant with my kids and couldn’t take meds I got by with the recommended ADHD diet and exercise regime and a good routine.

Instead, he has instituted an extremely strict routine that basically isolates the teenager from anyone except immediate family, as well as controls her diet and access to her comfort items.

The final straw for the girl was being banned from family Christmas for a transgression.

It turns out my BIL has taken that into hyperdrive and gone full prison guard on Emma’s life in order to get her grades up. She has a strict routine that only includes school/studying, exercise, and family meal times. She is not allowed any contact with friends outside of school, and eats a special diet that doesn’t include dairy, caffeine, or sweets of any kind.

Everything “distracting” has been taken out of her room, including ALL of her books and beloved paintings by my late mother.

Her science and math grades have come up to Bs, which my BIL insists means the routine is working but still can’t be eased up on yet, since she hasn’t come to her “full potential”.

The incident that triggered her phone call (she stole her brother’s phone while he was sleeping because she’s not allowed a phone or unsupervised computer time) was her being banned from celebrating Christmas with the family, since it would be a deviation from her routine.

She says her sister doesn’t agree with how he’s handling their daughter, or with refusing her medication, but she isn’t willing to risk a divorce going against him, since there are younger siblings to think about.

OP wants to call CPS to, at the very least, get her niece the treatment she needs but everyone else in their family says the dad is “just being strict” and that she would be wasting resources.

I feel like this has fallen into awful territory and has only gone on so long due to the current craziness. I got my sister on the phone, and she broke down crying, saying that she’s begged her husband to ease up but that openly instituting a lighter set of rules or telling Emma to ignore him will absolutely lead to a divorce.

She says she’s weighed the options and since her husband would definitely get 50-50 custody of the kids, spurring a divorce to get Emma out of BIL’s rules ½ the time for the next 2.5 years of high school isn’t worth the kids being in a broken home and losing her kids ½ the time, especially with the other two still just 13 and 10. She said she’d “work on him”, but according to my nephew, my BIL has been even harder on Emma since he found out we talked.

I think CPS and the school need to be aware of this, but my dad says “it’s not against the law to be strict” and my husband says I would be wasting resources calling them since it’s “not serious enough” for the courts to get involved. I just don’t know what else to do. I feel like CPS could at least get Emma real treatment.

As usual, people on Reddit were ready and waiting to weigh in with their opinions on this pretty serious post.

People think that the aunt is not in the wrong, but also that her husband is right that it might not be a serious enough case to involve authorities. 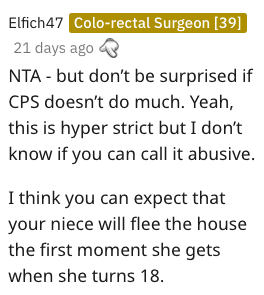 Several suggested the aunt offer her a place in her home, though it doesn’t sound like her brother-in-law would really allow that. 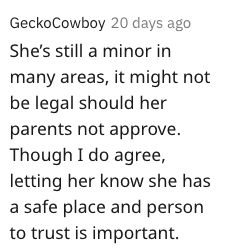 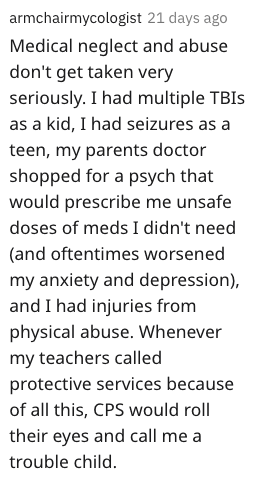 The father’s argument will probably work on a lot of people. 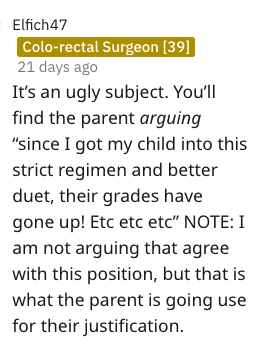 Agreed that I would have lost all respect for my sister through this, not putting her child’s health and welfare first. 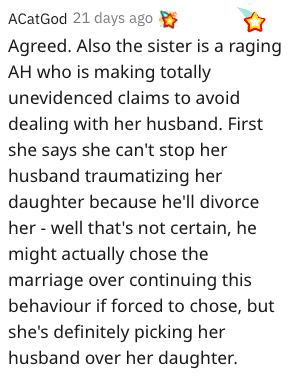 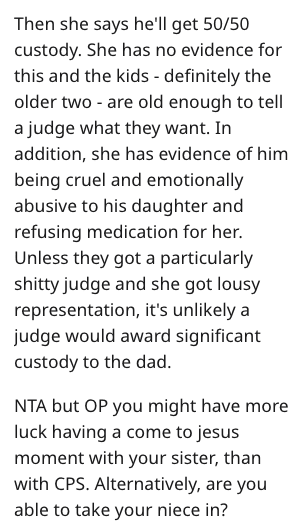 I don’t think that CPS is going to do anything, sadly, but I do think that the niece’s parents are truly awful and that as soon as she’s able to get away from them she’s going to run for the hills and never look back.

So I hope it’s all worth it when their daughter no longer speaks to them.

What are your thoughts? Drop them on me down in the comments!