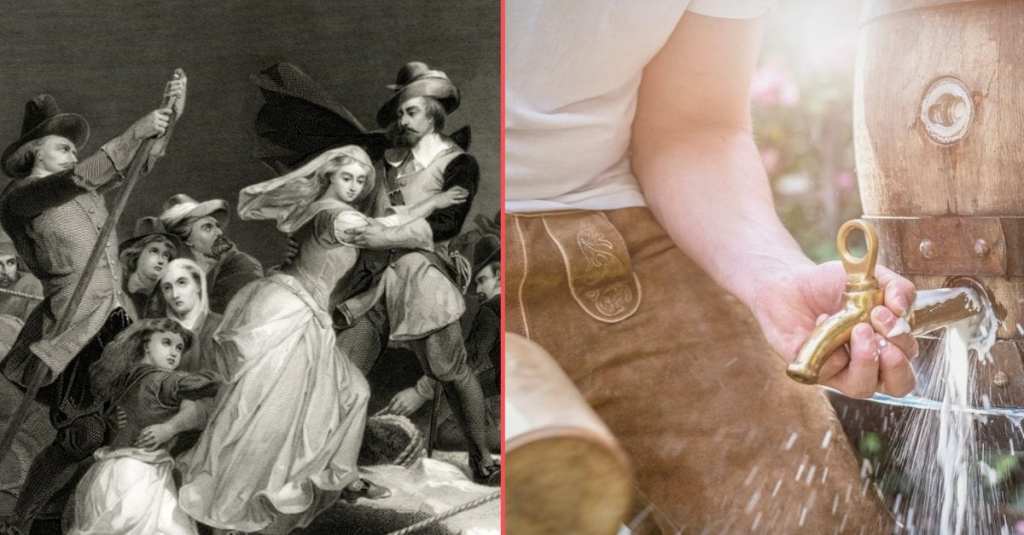 Did Pilgrims End up at Plymouth Rock Because Their Beer Supplies Were Dwindling?

Here’s a tale about the founding of America that they don’t (but should) teach you in high school – beer (or lack thereof) played a role in the choice to make Plymouth Rock the first landing place for English settlers in the New World.

First, let me dispel the notion that the proper Separatists were getting sloshed as they made their way across the Atlantic, though. In order to make long ocean crossings, people and shipping companies had to figure out how to store water. People can’t live without it, of course, but as we all know, water that sits, stagnant and without modern ways to seal and store it, quickly grew stagnant and prone to water-borne bacteria.

People had realized for quite some time, though, that alcohol eats bacteria, and so weak beer, known as ship’s beer, kept everyone hydrated on long crossings. It had a much lower alcohol content than what we drink today, and there was also “small beer,” which had almost no alcohol in it. The latter was handed out to every passenger – even children – a quart per day.

Fun Fact: Ship’s crossings also led to the invention of IPA’s – India Pale Ale’s were born from the need to make beer that would be good after the LONG journey from England to India, and brewmasters found the answer in extra hops.

When people came home from service in India, they didn’t want that weak-a$s pale ale served ’round the local pub – they wanted that good INDIA pale ale.

Back in 1620, though, the Mayflower’s crossing was not without trouble. There were originally two ships, but when one began taking on water early in the journey, all of the passengers (and presumably their rations) were transferred to the sturdy Mayflower.

By the time they mitigated that trouble, storm season was upon them, and rough seas delayed their trip by about two months. November is obviously not the ideal time to arrive in New England. The cold weather meant that planting crops would have to wait, and rations from the ship would have to last.

The captain and others aboard did realize that the bit of land in Plymouth wasn’t even the one the colonists had been authorized to populate, but….the beer.

Stores were running low, and so the captain decided to dock the ship and canvas the new land. He sent the passengers and their servants aground to find drinkable water (so they could make more beer) and the crew remained on the vessel, keeping the remaining beer stores for themselves.

One passenger, William Bradford, complained that the passengers “were hastened ashore and made to drink water, that the seamen might have the more beer.”

Another early colonist reported that no one liked the water in the New World, writing “I dare not prefere it before good beere.”

So, there you have it. The fact that beer played a role in the choice of Plymouth Rock as a landing port is not a tall tale, and honestly, I think we could make the case that beer is this country’s founding beverage.