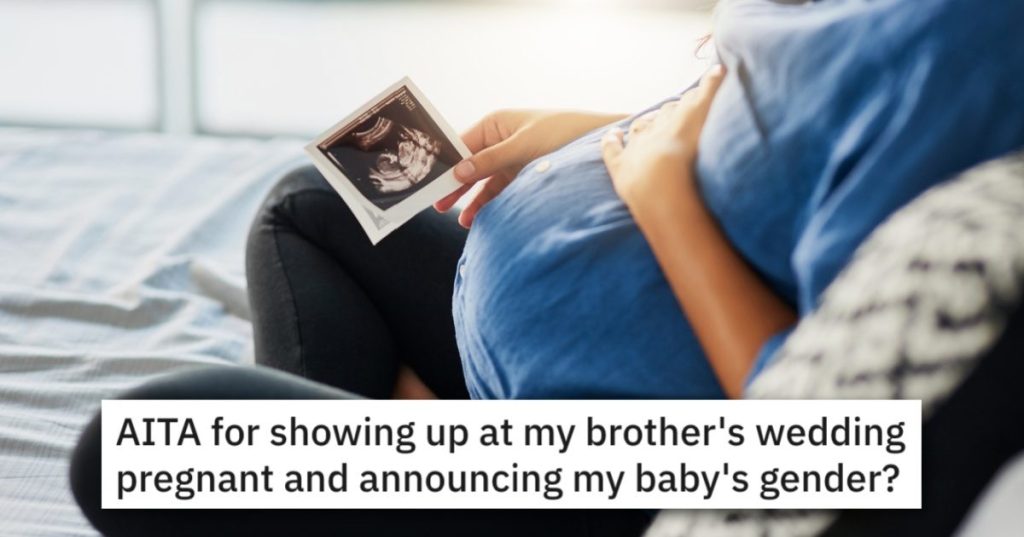 Did This Woman Upstage Her Brother’s Wedding By Showing Up Pregnant?

If you’ve spent any time reading posts on the subreddit Am I The A$$hole, then you know that weddings are one of the things that makes normal people act truly crazy.

Another one is definitely pregnant ladies, so put the two together and I’m not surprised that drama ensued here.

The setup is that OP doesn’t leave near to/isn’t close to her family, but accepted an invitation to her brother’s wedding when offered.

She said she would be attending alone, because she and her husband had recently separated – just before she found out she was expecting.

OP let her parents and brother know about the pregnancy before showing up.

I (36F) am not close with my family. I live in a different state, so I don’t have much contact with them. My brother (30M) got married last weekend and invited me. I told him I’ll come and not have a +1.

My husband and I recently separated, and after that I found out I was pregnant. My extended family didn’t know about the separation or about the pregnancy.

I told my brother I was pregnant when we spoke on the phone before the wedding, he congratulated me and that was more or less it. My family also knew my marriage was very rocky. My parents also knew about the pregnancy.

By the time the wedding rolled around OP was 7-months pregnant so there was no avoiding the surprise/questions from other family members.

The bride was also upset because the priest, who had known OP since she was a child, made a comment about her pregnancy during the ceremony.

So I am 7 months pregnant right now and getting a divorce. When I showed up to the wedding, everyone was super shocked to see me be pregnant and alone there.

A lot of questions followed, I answered them with as little info as possible and that was it.

During the ceremony, the priest mentioned my pregnancy (it’s a small town and the priest has been there since I was a kid) to make a joke or whatever about what is next for the bride and groom – babies, something like “and after OP’s baby, hopefully many more will join this beautiful family of Bride and Groom”.

Bride was pissed off, because now EVERYONE knew I was pregnant.

Afterward, during pictures, OP corrected her brother when he said something about his first nephew, letting him know the baby was a girl, instead.

This made the bride extra angry and her family, too – and even OP’s parents don’t think she should have said anything about the gender during the wedding.

During the picture taking part of the reception, my brother says “okay and now I want to take a pic with my favourite sister and my FIRST nephew”. I laughed and said “niece, actually” and he was super happy, we took a pic, that’s it.

Bride came to me later and called me an AH for upstaging her wedding with not just my pregnancy but also the “baby gender announcement”.

Her family is obviously on her side, my brother thinks she is acting crazy and I did nothing wrong, and my parents think I should have informed people I was pregnant before coming to the wedding + should have kept quite about gender.

Am i really the ah here?

Does Reddit agree with her family? Let’s find out below!

The top commenter says OP is not the a$$hole, because of this simple reason. 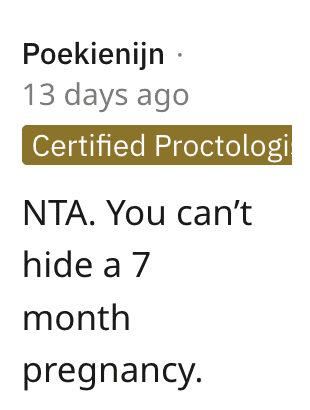 Seriously, what was OP supposed to do, here? 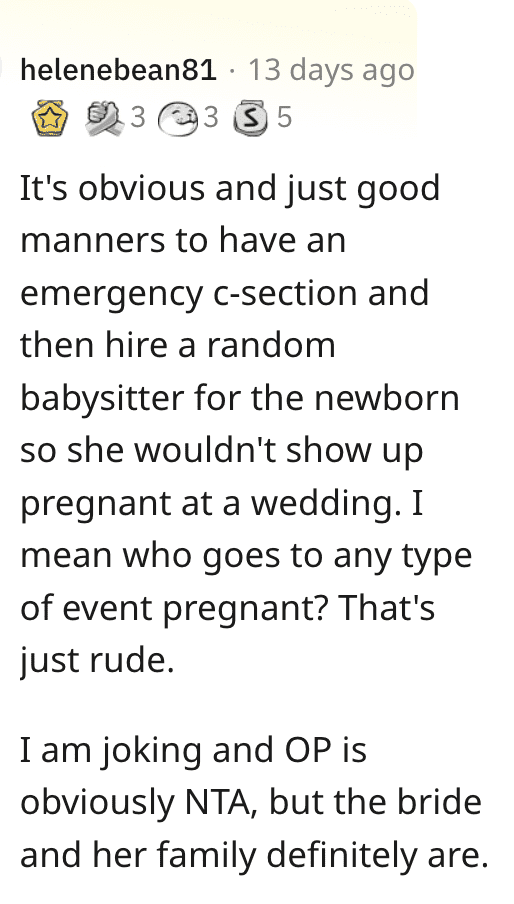 People seriously need to chill out about this wedding stuff. 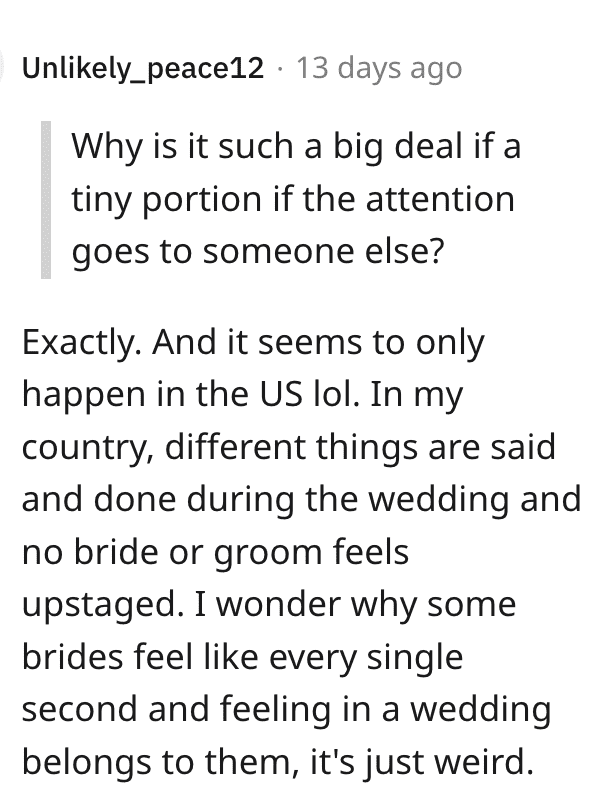 This person has a super hot take. 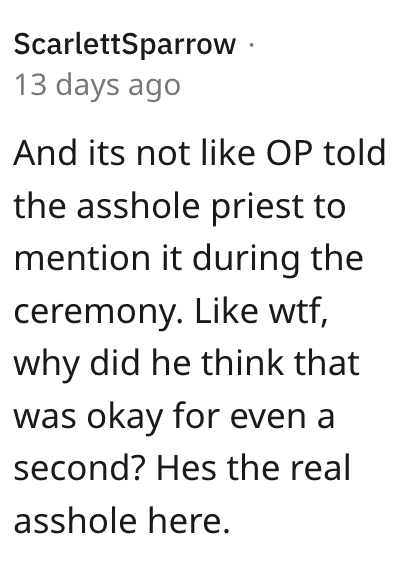 It wasn’t exactly an announcement, anyway. 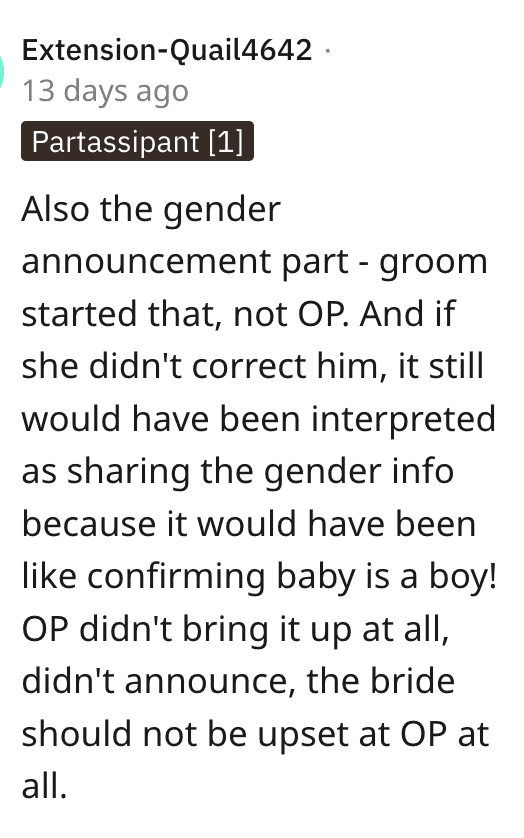 Y’all, this is just silly. OP did her best to downplay her own news, but she can’t control everyone else – or the priest.

How would you handle your new sister-in-law in this scenario? Drop some advice in the comments!