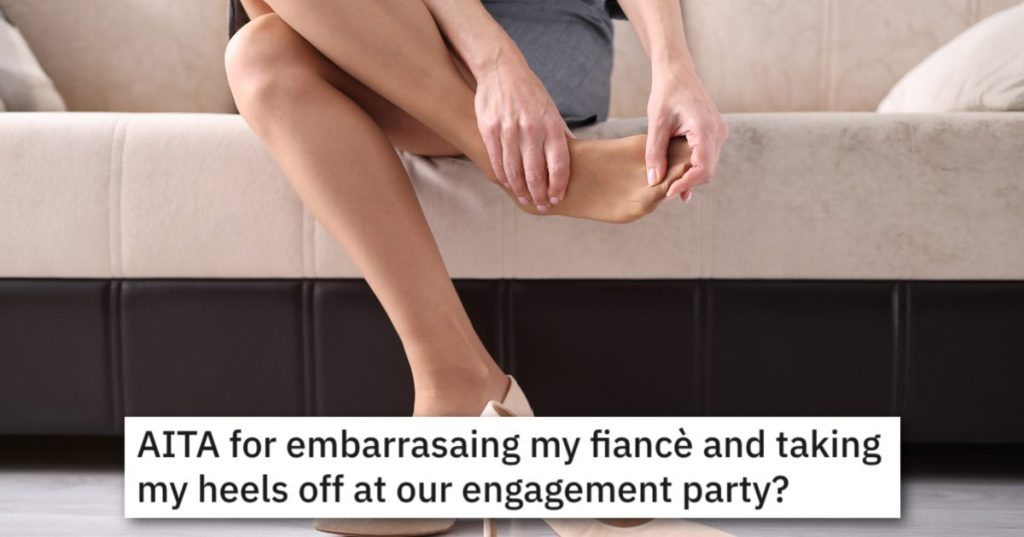 Does This Woman Owe Her Fiancee An Apology For Taking Off Her Shoes At A Formal Event?

When two people from totally different backgrounds try merging their lives, surprises often pop up out of nowhere.

These two people have known each other long enough to get engaged, but before their engagement party, OP had no idea her fiancee had an issue with the difference in their heights.

OP is shorter than him and the rest of his family, so he asked that she wear heels to the party “because of the photos.”

My fiance (m31) and I (f26) got engaged several days ago. This is relevant, he’s tall and I’m in the 5’s category, pretty small compared to him and his family.

He asked that I wear high heels at our engagement party since there was going to be photos.

She doesn’t like heels but gave in because he “begged” and also because he promised to make sure that she was sitting more than she was standing.

Although I wasn’t comfortable (not a fan either) with high heels, I decided to wear them just for his sake since he begged and pleaded. and also since he promised I would be sitting most of the time.

That did not turn out to be true, as he expected her to stand next to him and greet all of their guests as they arrived – and hold conversations with them, too.

She asked if she could sit and his mother told her no, because it would look odd.

But at the party he had me stand for hours to welcome the guests (there were like 20 guests) with him.

I got so tired of standing and my feet and legs were on fire.

I asked if I could sit but his mom said I’m the fiancee and should stand next to my partner not just sit like the party had nothing to do with me.

OP had enough and slipped out of her shoes, then went back to stand next to her fiancee as requested.

His family freaked out and didn’t seem to care when she replied that she was in pain and couldn’t do it anymore.

I told my fiance again that I was in so much pain but he said “suck it up, it’s almost over”. I had enough of it, I took my heels off and let my feet and legs cool off. He and his mom looked at me in utter confusion. Several of his family and guests saw me barefoot as well.

He freaked out asking what I was doing. his mom asked that I put my heels on but I said my feet were done and I couldn’t do it anymore.

my fiance begged me but I stood there til it was over like he wanted.

Her fiance flipped out on her in the car about how she’d “embarrassed him,” and when she told him that he’d promised she would be comfortable but she wasn’t, he told her she should have sucked it up.

The minute I got in the car he flipped out.. saying I embarrassed him in front of family and friends by standing there barefoot and refusing to put my heels back on even after his mom repeatedly asked.

I reminded him that he said I wouldn’t be standing but turns out it wasn’t true.

Someone of her height, he said, should wear heels more often.

Then he stormed off and refused to speak to her.

He argued that for someone with a height like mine, then I should wear high heels more often, and said should’ve sucked it up for his sake.

He went upstairs and turned his phone off and refused to speak to me.

Now she’s thinking maybe she should have just sucked it up for one night, but is that true?

I had no intentions of embarrassing him and I do feel I should’ve sucked it up.

But I think that he wasn’t truthful about how long I was expected to stand.

The top comment says what we’re all thinking, which is that she needs to put her sneakers back on and run as fast as she can. 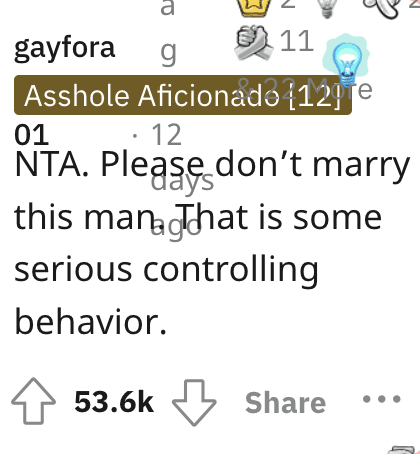 Anyone who has been there knows it won’t get better, only worse. 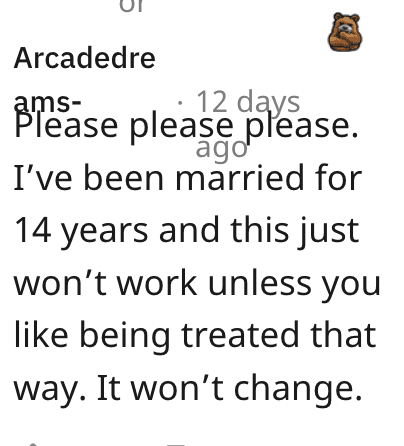 We sincerely hope she won’t have to learn this lesson on her own and the hard way. 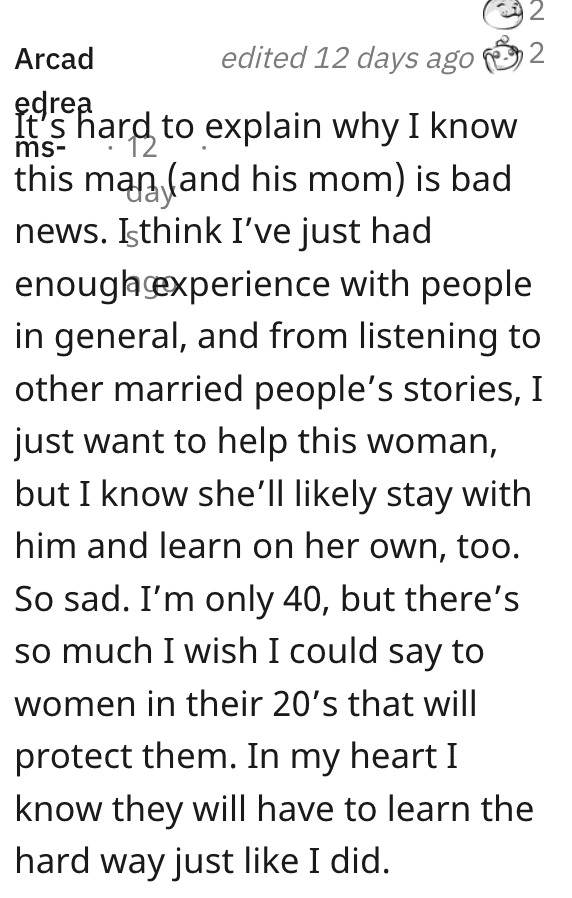 This is an opportunity for her to save herself a lot of heartache. 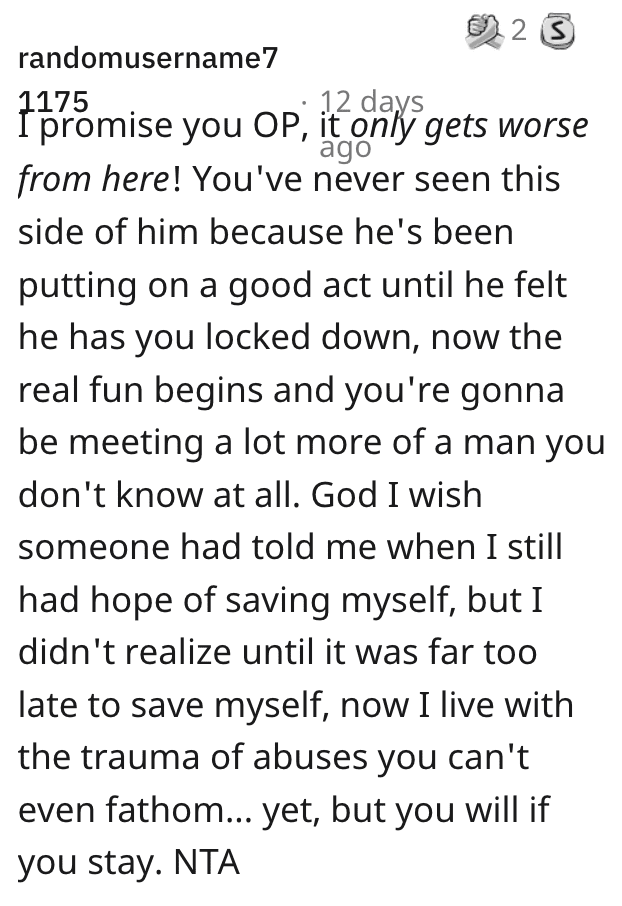 Plenty of people who are in height-difference relationships chimed in to say this is definitely not normal. 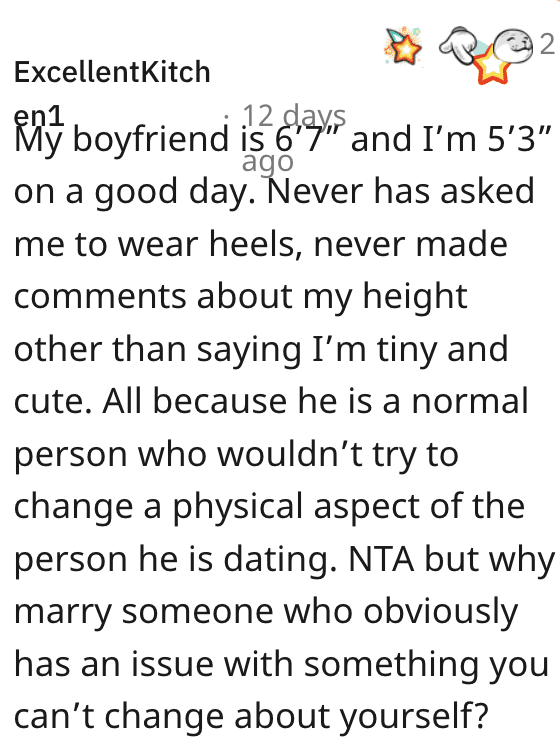 Y’all, I wish this woman would give us a happy update that they broke up, because I agree with all of these comments.

What about you? Do you think this is a huge red flag or just a regular disagreement? Tell us which one and why in the comments!