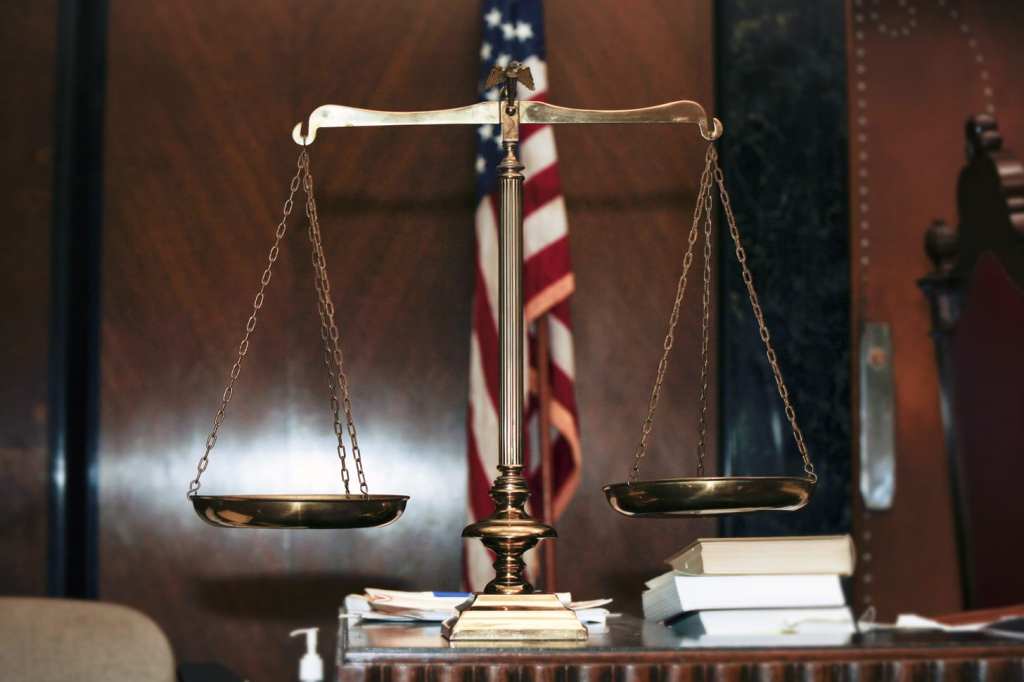 No one ever said adulting was easy. Paying bills, working, and other tasks related to survival can be a total drag.

But work environments can also easily become toxic, leading to difficult situations and even drama! A commenter spoke about their ordeal on the Reddit forum https://www.reddit.com/r/ProRevenge, a part of the Reddit site focusing on people who get their dues after unjust work conditions.

At first, things seem okay. The Redditor began a hotel job while in college and was able to finesse a flexible schedule in order to do the job and stay in school.

But then management changed. These transitions are never easy, but this one really took a turn for the dramatic. Read for yourself!

I got fired and went after the boss’s money, his hotel and his marriage.

Back when I still was in university, I used to work for a hotel to make ends meet. When I started the hotel very urgently needed new personnel. So I cut a deal with the old owner about getting to choose and pick shifts, so I could visit my courses and exams. Speaking some extra foreign languages I also got a little bonus each month on top. the old owner was a great guy. He owned multiple hotels so I rarely saw him. But when he was in the house he always made a point to have drinks with the staff, chat with us and if we were free he even invited those of the front desk to fancy restaurants who were not on shift.

Fast forward. I had worked in the hotel for a few years now and was nearing the completion of my studies. So it wouldn’t have been an eternity until I had to quit anyway. As I was of course more interested to work in my field of study.

As part of my deal with the old owner I mostly chose to work night shifts. Allowing me to visit my courses at university during the day. To make up for my privileges I had picked up the habit of doing some extra work in the dead of night other shifts would normally have to do, when I on contrast could’ve sat around and stared at the walls. People were grateful for the help in the beginning. And we became a rather tight-knit group. But over time people rotated in and out.

When the old owner retired and his asshole of a son took over the business as the new owner, I already feared the worst. the new owner didn’t like me very much. I never found out the exact reason for that one. I was at that point nearly the sole veteran left from when I started. Among the tasks I had taken on was doing light clerical tasks to ease the manager’s job in the morning. For that, I generally had to use the manger’s network account.

One night while doing my lists, I logged into the mangers account and email to do my job. Then I saw an email with my name in the subject line. I know it is not nice to snoop, but of course, I read it. Turns out the new owner wanted to get rid of me. I still had my old employee contract with the bonuses for foreign language abilities and was allowed by my contract to pick and choose shifts. I can only assume these privileges are what made the new owner hate me. No idea if he had other reasons. Because to be honest these seem very week to me.

But he couldn’t fire me without cause. On top of that, I would be owed severance if fired. And generally, there were not enough bodies in the shift rotation without me. Though the new owner didn’t seem to understand that point as the emails told me. I looked for more email concerning me and found them.

There was an email chain between some of the employees, the manager and the new owner. I was of course not CCed as I was the hated topic. The employees didn’t like me hogging the night shifts. Because those paid better and for every night you worked you got paid the night bonus. The manager was the only one rather neutral on the matter and just curbed their enthusiasm to get rid off me, as they needed me to be fully staffed. the new owner, and my colleagues actively conspired to make a hostile work environment so I would quit of my own volition.

I was furious. I thought about a variety of reactions. From egging their cars to burning down the hotel. But I settled on a less crazy method of revenge. I called my uncle at 2 am asking for advice. My uncle is a lawyer. So for sake of proof, I forwarded myself all the emails. I made photos, printed them out, made copies and filmed the whole deal just to be sure.

My uncle told me to sit tight and see if things got worse, or if it was just bluster. And so I gave it a few days. And things did take a turn. Snide remarks about my looks, clothing and so on were only the tip of the iceberg. Some of the colleagues were just as professional as before. But the conspirators always left extra work for me or pawned of shit duties they normally had to do on me. I always kept a spare shirt and suit at work, just to have a change, which suddenly disappeared. One guy even started to threaten me with violence. But I kept clenching my butt cheeks. I would not give them the satisfaction of saving on the severance or giving in. I am a big boy after all. I did, however, stop doing any extra work, I was not obligated to do. Which in the end was the reason they used to fire me. They still had to pay me severance.

The next day my uncle with bundled proof of the email and all documented harassment by my colleagues served the hotel my lawsuit. It started with wrongful termination and ended with harassment. Reportedly the manager went white as a sheet when he realized where the emails must have come from. the new owner had been on vacation and had to cancel his expensive vacation in France to deal with this. Their council advised them to settle. So I accepted my severance and a hefty bonus on top. Enough money to last me until the end of university without work.

But that was not all my revenge. I had gone after the new owner’s money. But in the next step, I went after the hotel. I had used all the spare time during night shifts alone, to document every last violation of city, county, district, state and federal law I could find. That went from minor things like some harmless mold under the kitchen sink to substantial violations like modifications to the building. The building was under a limited form of historical protection by federal law, on the ground of being built and inhabited by somewhat important historical figures a few hundred years back. So every renovation or change in floor plans needs to be signed off on by a committee. Which can take ages. There is also a grant paid to the new owner by the government for keeping the building intact as is.

So with my uncle’s help, I sent documentation of every violation I could find to the corresponding agency. In one month everything from health, building code, fire safety to the finance and work police crawled over the hotel. In the end, it was the building and fire inspectors that shut the place down. the new owner had done substantial renovations to the top floor luxury apartments, which he used when he was in town.

So the new owner had to pay back the grant, pay fines for unauthorized alterations to the building, endangering his guests, because something wasn’t built right according to fire code and had to close down shop until the building was fixed. I also tipped off a friend who had studied journalism and worked at a local paper. The paper ran an article on all the violations accumulated. Which tanked the business once it had reopened, as the newspaper article had led to horrible reviews. In the end, to afford all the fines, repayments and building cost the new owner sold the hotel. As the cherry on top, all the assholes who had tried to harass me out lost their job. Granted the people who didn’t do anything to me lost their jobs too. But didn’t do anything to stand up for me or help me either. So I don’t feel too much remorse

And the revenge cherry on top was, that the new owner, whenever he was in town used to bring home escorts. Which in my country is not illegal. But he was married. It took some doing to get that information to the new owners’ wife. But one of my former colleagues, who had quit before this had all happened, had her email. So I let her know what the new owner was up to when he was out of town. I don’t know what exactly happened, but they did divorce in the end. Make of that what you will

TL;DR: New Boss dislikes me. I wait until I get fired to sue him for encouraging other employees to make my life miserable, so I’d quit. I take my severance and a hefty settlement. Then I send proof and a list of violations that the hotel is not up to code to the according agencies. The hotel gets shut down. To pay for fines and to get it back up to code, Hotel needs to be sold. Asshole colleagues lose their jobs. Lastly, I know Boss cheated on his wife with escorts, which I let the wife know. Marriage blew up.

Once management changed, everything got worse and Manager B literally conspired to fire the Redditor. Big mistake. The Redditor had a lawyer for an uncle, the password to one of the manager’s network accounts, and he knew every piece of dirt on the company.

It would’ve been easier for Manager B to pay severance and go. Now, it sounds like a bit much, but the reality is that if we’re to believe the stories we see, toxic work situations like this one are quite common. It’s rare that an employee is able to rectify a situation like this. Naturally, fellow commenters loved it! 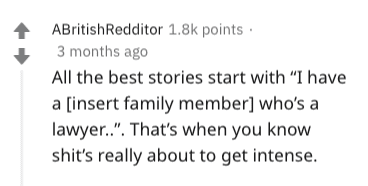 Others wanted more details! Because I want details? How did this happen?!?! 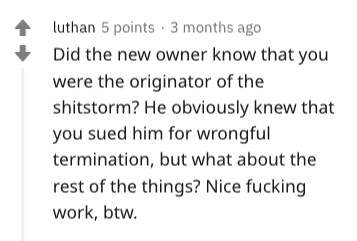 And somebody shared similar experiences: 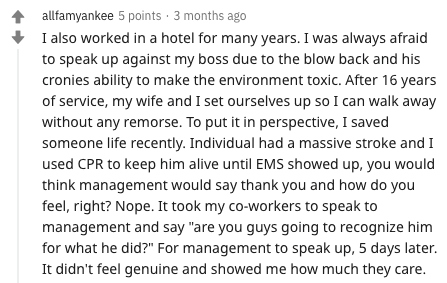 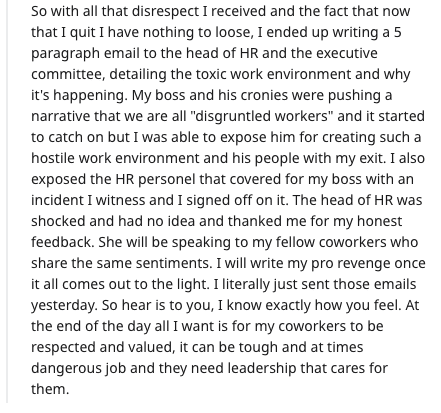 So what did you think of the OP’s story and actions? Did he do the right thing or did he go too far?