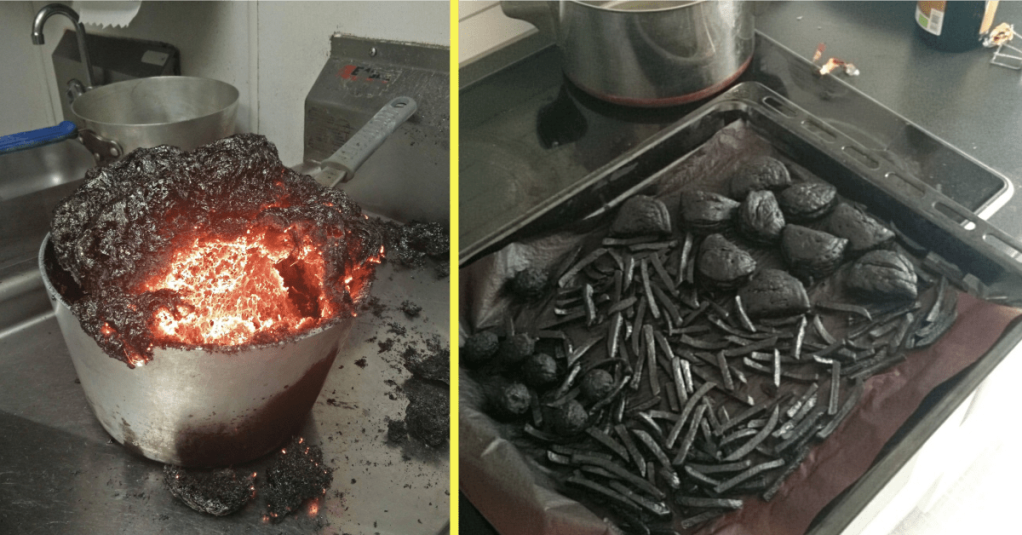 Hey, guess what? We can’t all be wizards in the kitchen.

A lot of folks were never taught how to cook properly or they never worked in a restaurant during their formative years.

With that being said, I really don’t think there’s any excuse for what you’re about to see…if I’m being honest.

These are epic cooking and baking fails of the highest order and they’re so bad they might even make you shake your head and cry.

But let’s try to cut these people some slack…hopefully, they can brush up on their skills in the kitchen ASAP or a lot of people are gonna be eating some sh*tty food.

1. Sort of in the same ballpark…

In a round-about way…

[OC] Well I tried. from ExpectationVsReality

2. Just go ahead and throw that out the window.

It’s the best thing for everyone.

My sister made my brother a birthday cake. from shittyfoodporn

This is gonna take a while…

[OC] over the holidays my sister tried to make a peppermint candy platter on a perforated pizza pan. from Wellthatsucks

I hope he was drunk…

In case you ever think your roommate is dumb… let me one up you pic.twitter.com/INsZbAfnNv

I forgot I was making caramel at work. It’s a tad overcooked. from pics

6. I’m giving this bonus points because it is so horrifying.

7. Good thing you didn’t set the house on fire.

Be careful out there!

Got drunk, got hungry, fell asleep from shittyfoodporn

And kind of sad…

A valiant effort, if I do say so myself.

I hope you didn’t put that in your mouth.

My wife steamed hotdogs. from shittyfoodporn

Pro tip: When cooking, don’t remove all the spice lids at the same time. from funny

Share some photos with us in the comments and tell us what went wrong!