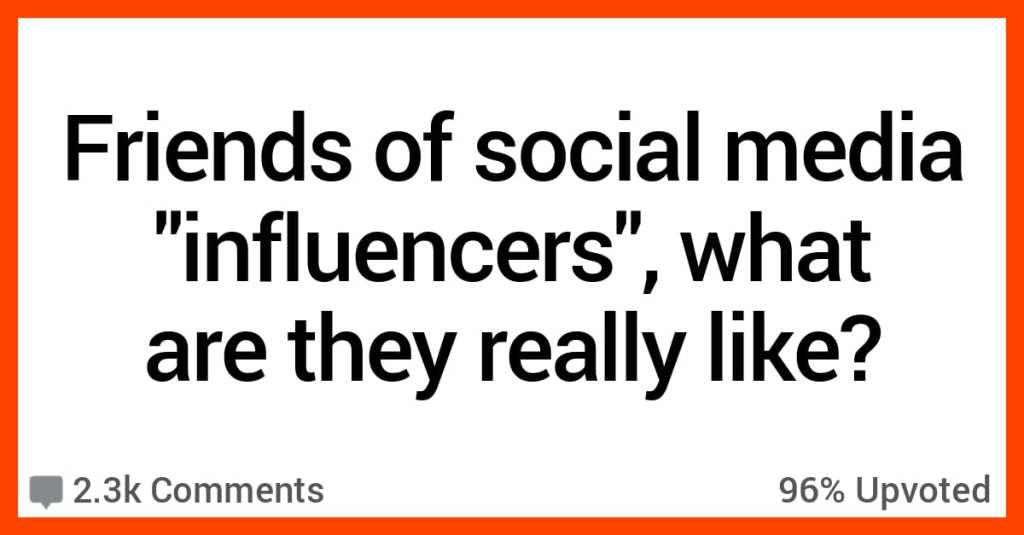 I swear, the next time I open up Instagram and the first video that pops up is someone dancing in their kitchen for no reason, I think I’m gonna lose it.

I’m talking about my mind, by the way.

Because this influencer culture we live in now is just too much for me to handle!

But I also kind of want to know what these people are like in real life.

Let’s check out stories from AskReddit users who deal with these folks.

“Sad. In the beginning they started because they got offers from brands because they were so popular on Instagram and it was a lot of fun for them.

Now they don’t ever post pictures or videos without a filter. Rarely ever like a picture on the first try and don’t you dare post any pictures of them without getting their approval for it.

Imagine trying to get a group picture with all of your friends for your birthday but having you take almost one hundred shots to get one that your influencer friend is happy with.

Also in the beginning I would like and comment on all of their posts but now that’s not enough. They expect me message it others, share it on my stories and my page (something about new rhythms and likes not being important anymore). I hate posting stuff to my page but I do it any way to be supportive.

It is so tiring. They do get free things sometimes though that they sometimes share with me. Not worth it.”

“My sister has tens of thousands of followers. We used to be best friends in high school and she was my favorite sibling (I’m number 7 out of 8 kids in my family, I know my parents are crazy).

Now I just sort of want to blow my brains out when I’m around her. She’s just so obsessed and fake now. It actually makes me really sad.”

“One of my best friends dated a really insta-famous guy. He invited us to his house for a Christmas party and this is when I realized how fake social media was.

The guy didn’t have the car he paraded on social media. He he leased it, took several photo shoots with it, then gave it back. His house was in a different city than he claimed.

I don’t think it was for security reasons though. He said he lived in a very rich city but his house was in a more modest place. He asked me to send him the videos I took at the party, posted them, and didn’t even tag me because I “didn’t have enough followers”?

The worst part was that all the social media people at the party just kept yelling over each other trying to make the next big joke, but none of them were funny.

Dude has millions of people fooled.”

“Not friends with any anymore, but I used to work in San Diego nightlife and I had to rub elbows with a lot of these types.

I’m talking 1-6m follower type girls who were brought into the club as promoters, back in ~2016 when 1m followers was a big deal.

The girls themselves aren’t that bad. Some are crazy entitled, but for the most part they’re there for business and SD is a small enough town that reputation matters.

The worst were the subsuckers. Other girls who had fewer than 1 million followers, who hung around to try and soak up subscribers and make contacts in the industry.

Think of them like small-time actors who think they’re a big deal just because they have a few pilots in production. “I’m not big now, but you should kiss my a** because I’m the next big thing” types.

These girls would literally do nothing but take pictures all night (or all day, depending on the club) and demand free bottles, extra service, and other garbage without ever tipping.

“Got a friend with 75k subscribers on Youtube in a language other than English.

It used to be about their weekend getaways with nice drone shots. It was interesting.

Then, gradually became about their lives (how interesting). She’s get her phone/camera out at sometimes random moments, which could get annoying.

She got pregnant. Baby everything now.”

“I have a friend who has recently started trying to become one. It’s SO DUMB.

She posts half naked pictures of herself with captions that have nothing to do with the picture. She spend hours getting ready for her iPhone photo shoots and has little time for anything besides content creation.

Being an influencer is pretty much against everything I care about and stand for, so I envision us slowing drifting further apart. That s**t is stupid.”

“I went on a date with one and it was just frustrating.

Pleasant enough girl, but she was on her phone a lot.

I had sympathy since it’s her job, but I felt ignored a lot of the time we were together.”

You watch them slowly mentally degrade. Always ends in full blown narcissistic personality disorder or them having literally 0 self confidence.

Their goal is to meet artificial metrics in terms of likes/views/follows. For a lot of them, that’s their definition of success/ goal in life and if they’re not hitting it, they have failed as people in their minds.

So they go one of two routes. #1 is thinking that they’re really not good enough and don’t deserve to be liked which leads to a total lack of confidence and them becoming a shell of the person they were.

#2 is narcissism, where they come to the conclusion that they’re the best person ever and no one else knows what they’re talking about, and every single flaw, fault, or mistake they have/ have made is someone else’s fault.”

“My cousin is a moderately successful instagram model and she absolutely hates it. She hates her fans, finds them all cringey and pathetic, hates the drama and how PC it all is (she’s very conservative/traditional).

She’s basically the complete opposite of the happy bubblly ditzy girl she plays online and we often laugh over some of the messages she receives, including proposals and women angry that their sons/husbands are following her.”

“He was cool but at the same time difficult.

Get him alone and he was ok, but go out places with him and he started unnecessary drama and was super emotional. I ended up not being friends with him after a convention we went to he caused a lot of trouble for me and my friends.

It sucked cause I was the one who intervened and allowed him to stay and all of my friends were super upset with him, so I felt like I allowed a lot of the issues.

“Two of my distant cousins, they’re sisters, and are relatively well known YouTubers.

I remember the first time I met them, I was 9 years old and saw that one of them was fiddling with a program on her laptop. I asked her what it was, and she showed me her editing software (thinking back, it was probably iMovie) and basically told me about how she records videos and posts them to YouTube, and that she had about 5,000 subscribers.

She was really passionate and excited about it, and it seemed like she could go on and on for hours. I don’t think she got paid a penny. I thought it was cool at the time but didn’t think much of it. Just a hobby, I figured.

Fast forward almost 10 years and she has nearly 9 million subscribers, lives in a beautiful house in LA, and makes more money than anyone else her age could dream of. Her sister graduated college, but she saw her success and fell into the same “influencer” trap as well, because that’s where the money was/is. So they both “influence” full-time and have a whole team of people to do editing, assistant work, PR, managing, etc.

I would say the most obvious thing is that the first sister I talked about seems to have lost touch with reality, simply because she’s been doing this for SO LONG.

She acts much younger than her age to get views and maintain relevancy, and she’s gotten very used to living a privileged life, so much so that she frequently complains about “how difficult her job is” when there is no doubt in my mind that, if it were to all disappear tomorrow, she’d be like a deer in headlights working something like a 9-5.

Considering she doesn’t even edit her own videos or set up her own camera, she has hardly a thing to complain about, especially sitting in front of your vlog camera and crying to the people who are watching your videos and essentially paying your bills about how stressful your job is.

I mean this girl literally has an assistant to fetch her coffee and salads (as if she has no time to do it herself, maybe having an assistant is just an “influencer” or “status” thing to do??). She lives a very spoonfed life, and seems to frequently forget it.

Fortunately the college-graduate sister is very down to earth, and even she seems to acknowledge the ridiculousness of the whole thing. But at the end of the day, they’re doing very well and I will always wish them the best. I just find myself wondering how much longer it will last for them.”

If you spend any time with influencers, tell us what they’re really like.

Give us the dirt in the comments!