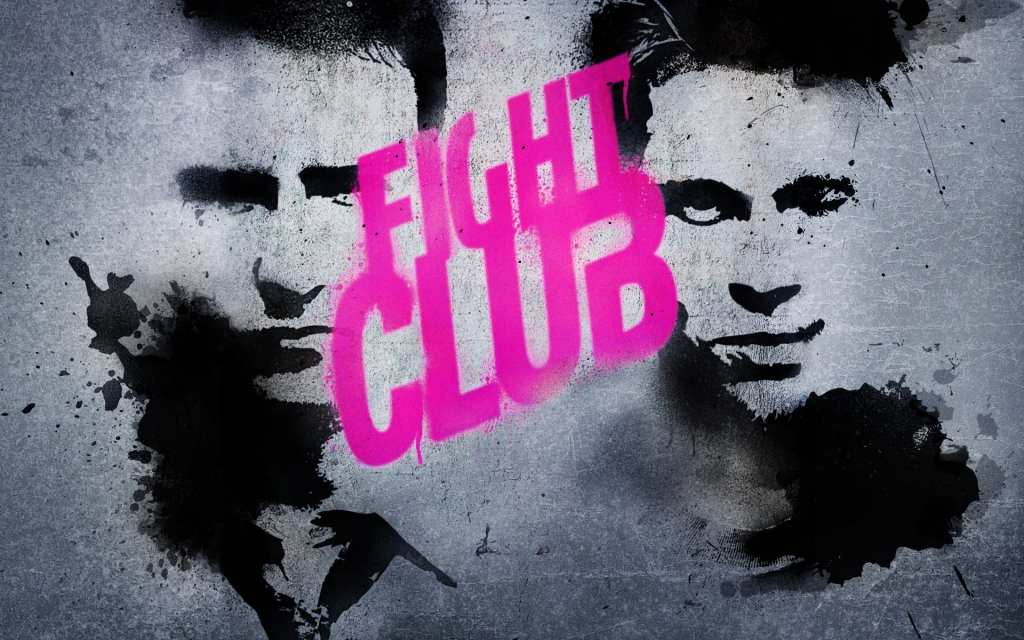 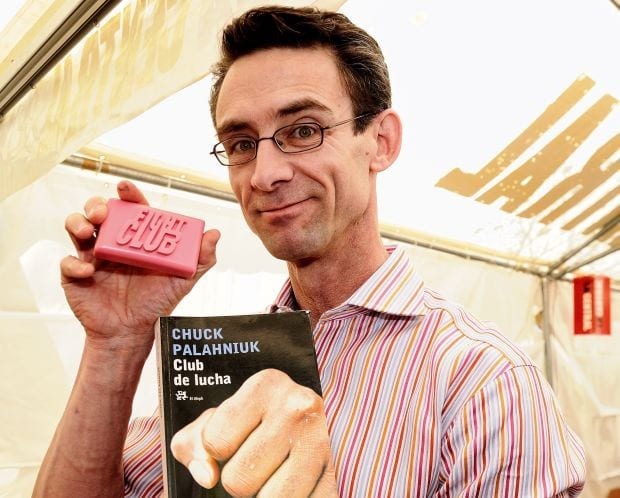 When I met Chuck Palahniuk at his book signing, I broke down like someone who was meeting their hero, because, honestly, of the top ten people that I admire, he’s way, WAY up there.

During the meet and greet, Chuck and my daughter had their heads together, and hatched a plan. Chuck asked her to write him a letter about me, what I liked, what my dreams were, and who I was as a person. She wrote him an amazing letter, and seeing her write such wonderful things about me was honestly a wonderful gift in and of itself. During the cover of night, she wrote the letter and passed it on to my husband to mail. 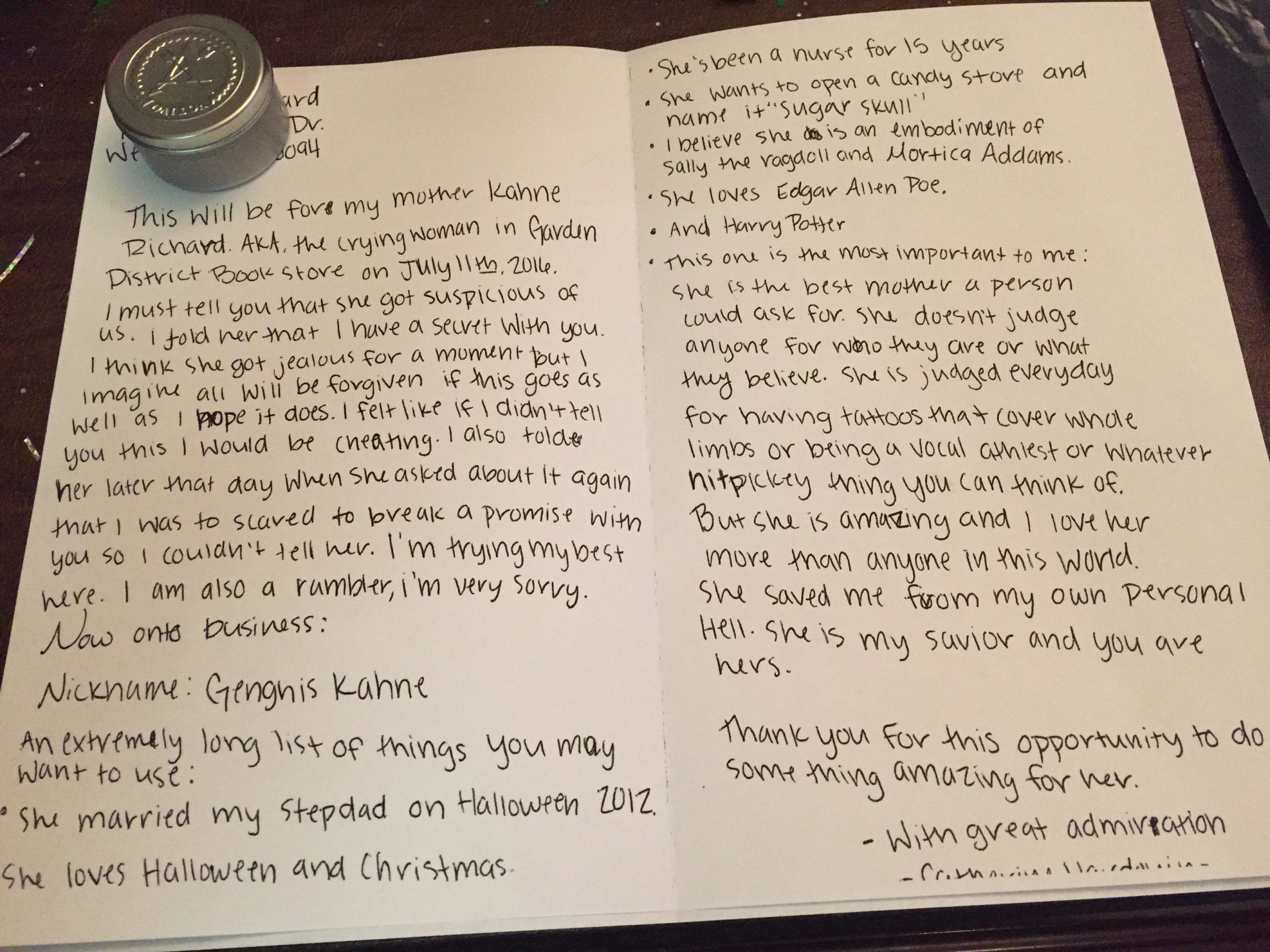 By the way, I want to point out this particular part of that letter, which is pretty much the most amazing thing I’ve read in quite some time…

“She saved me from my own personal hell. She is my savior and you are hers.” 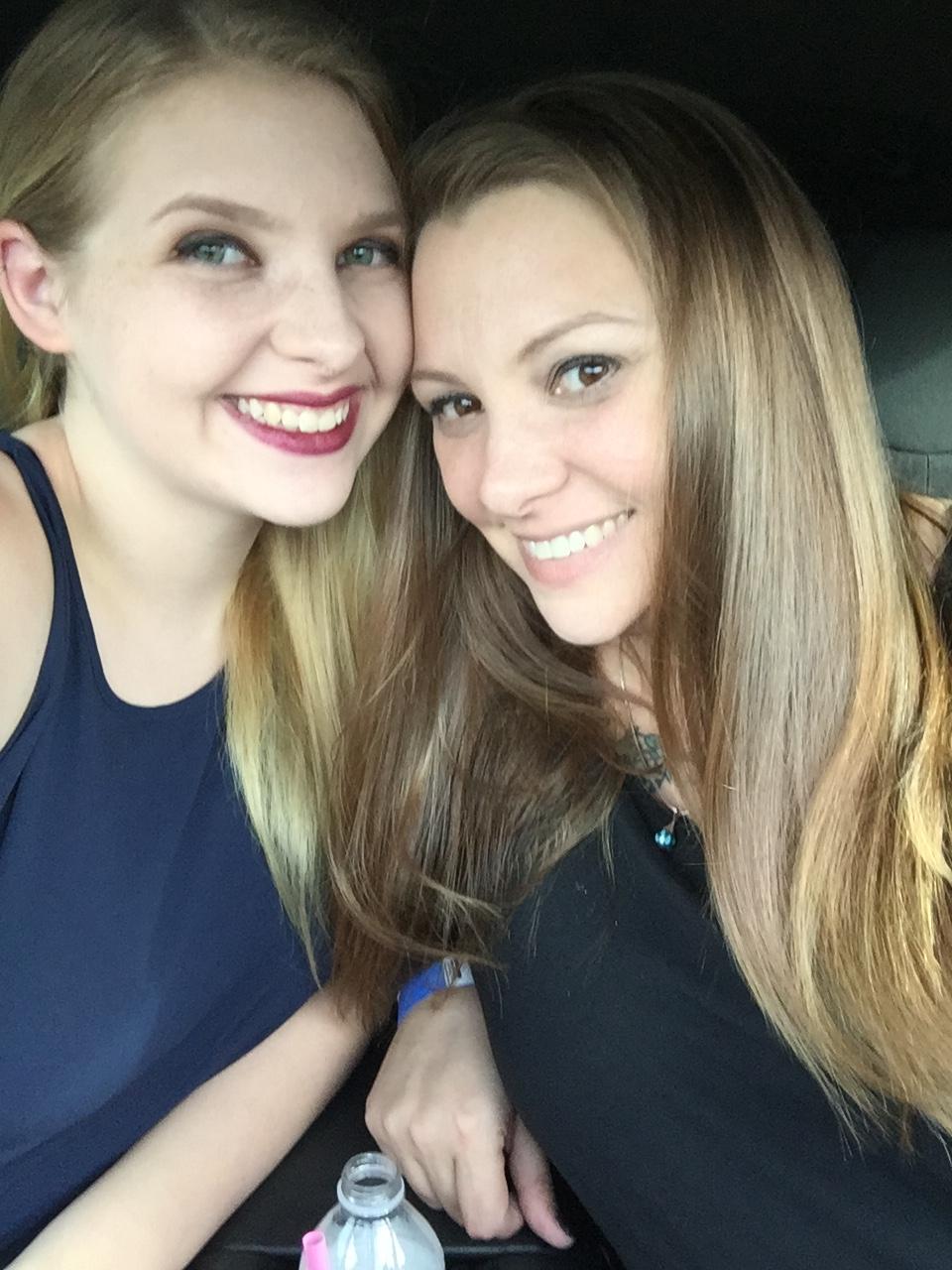 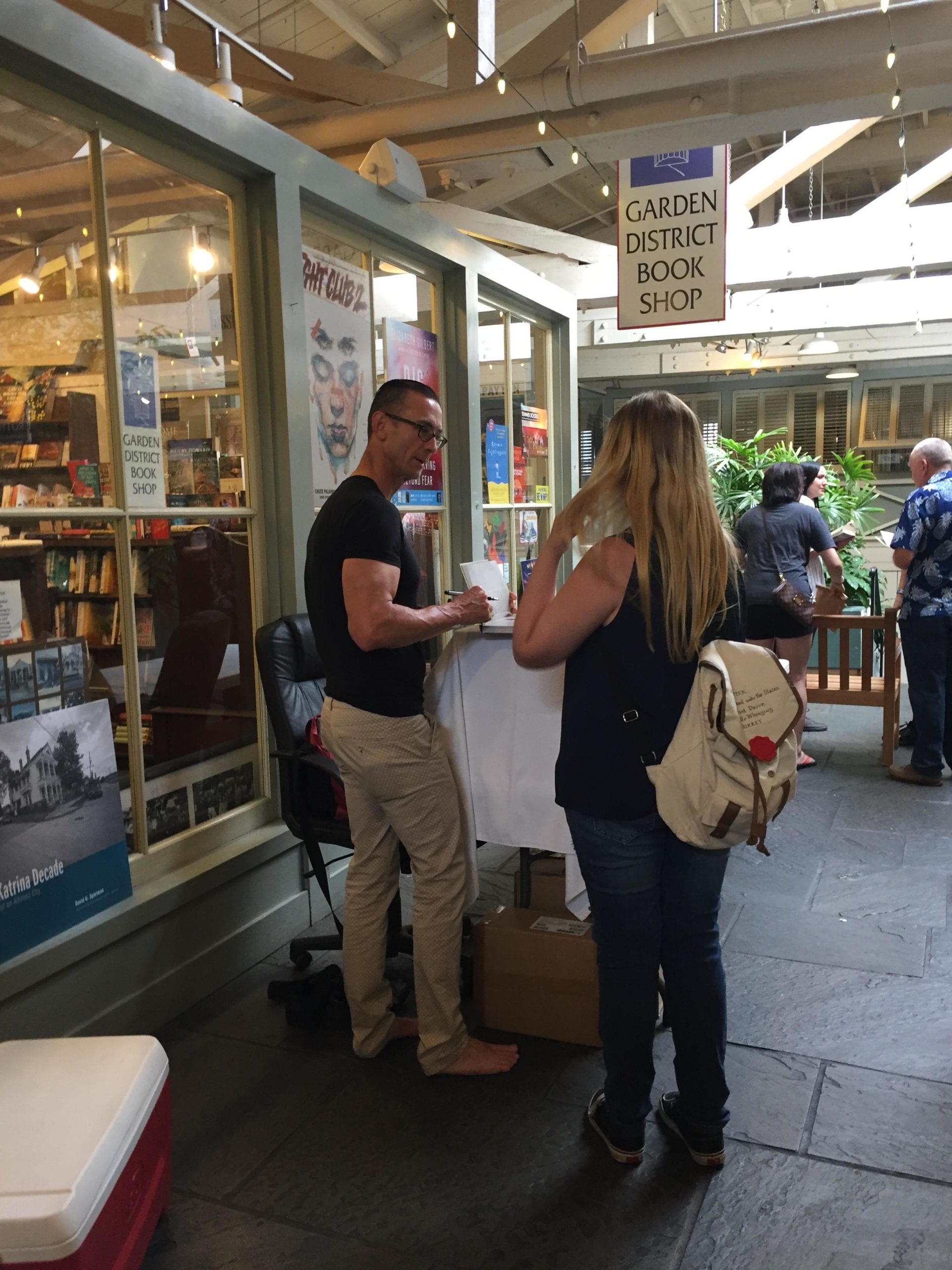 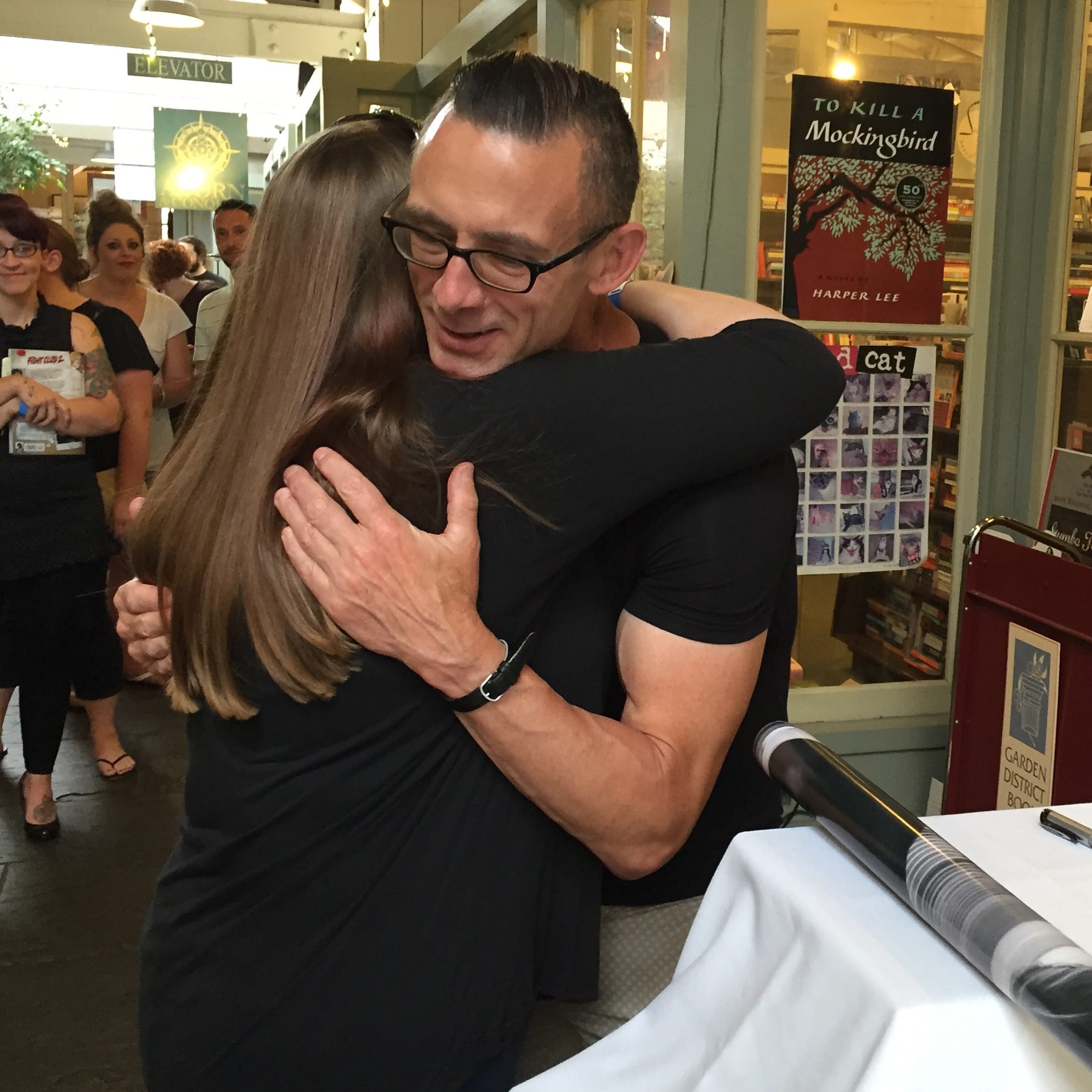 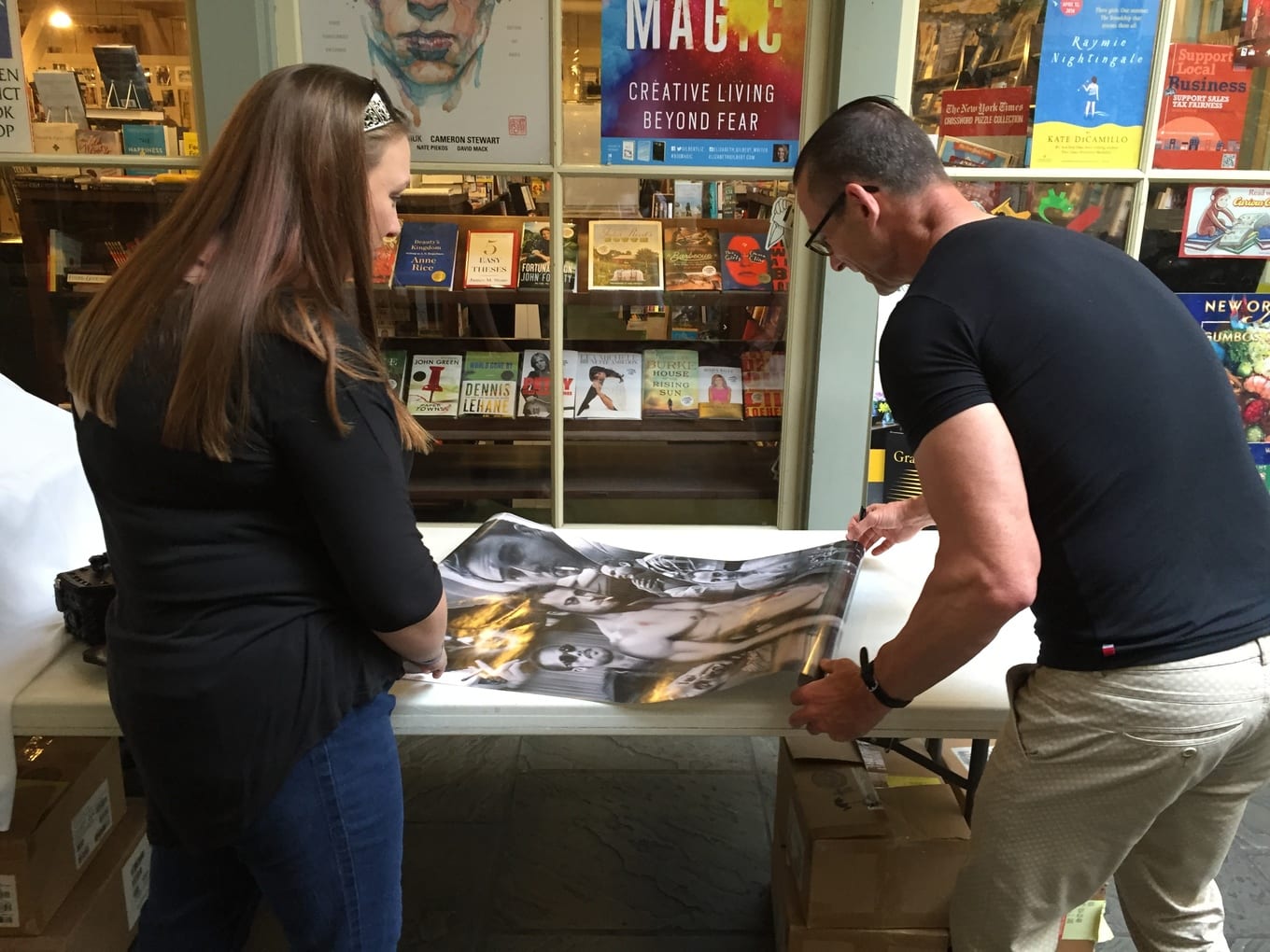 Check out that personalized Fight Club poster and DVD! 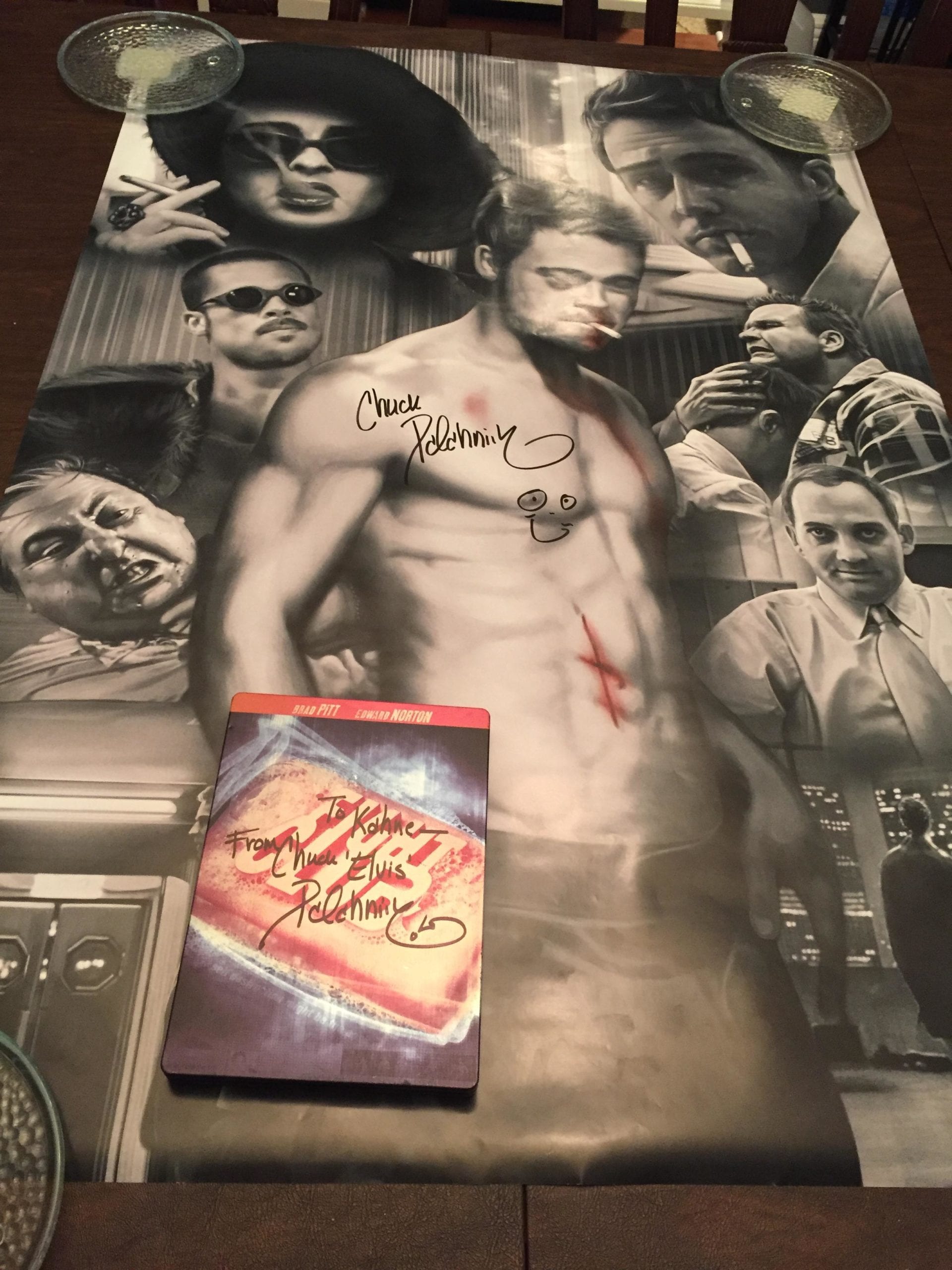 And this hilarious chokehold! 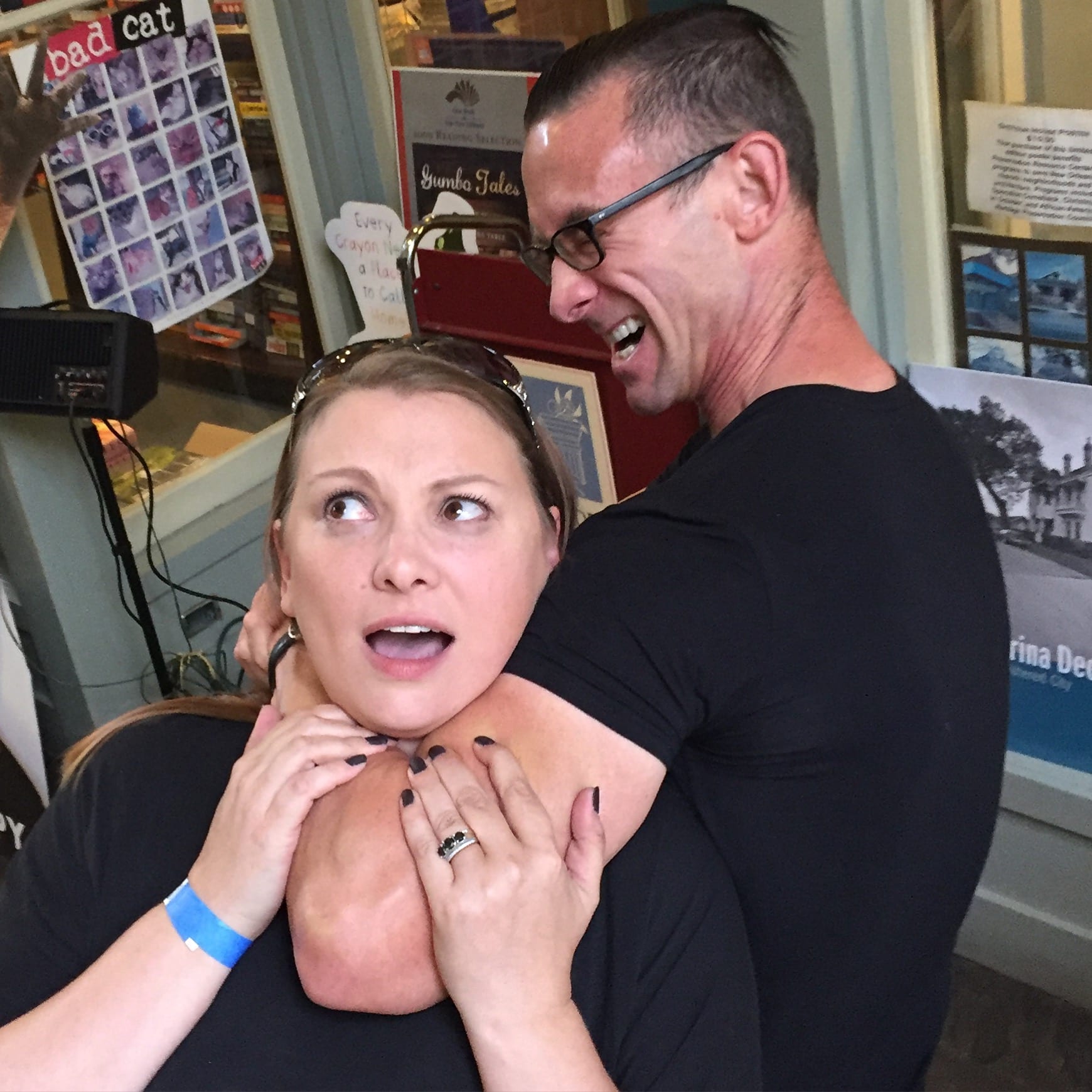 Today: I get a text from my daughter that I have a package waiting at home. I was confused as I had not ordered anything. (And trust me when I say today was an awful day.)

I get home and see the box with a note in front of it that says “This Was Our Secret.” The return address was from Chuck.

So what happened next? Find out after the jump!

After the tears stopped, the items I began to pull out of this glitter-packed box were each more hilarious and poignant than the next. He sent me soap (of COURSE), candles, incense and lots of candy. He sent me birthday candles and miniature sparklers. He sent me funny pens and copies of his tour CDs. 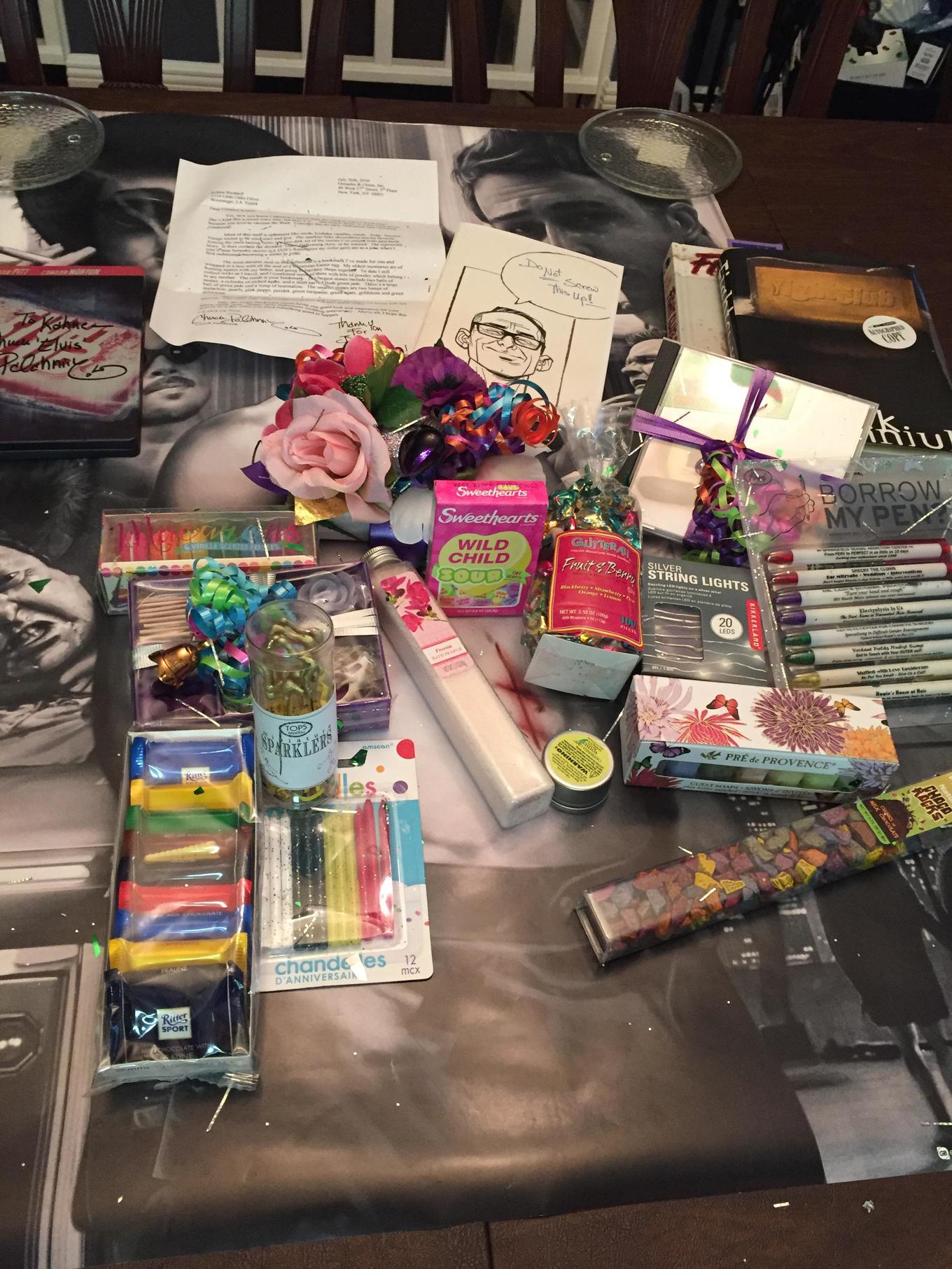 And the two most important items, a personal letter and a “bookmark” that he made himself. It’s got to be 4 feet long at minimum, made of pieces of his own mother’s jewelry, carved jade and rocks he’s picked up during his travels wrapped in the most ridiculous box I had ever seen. 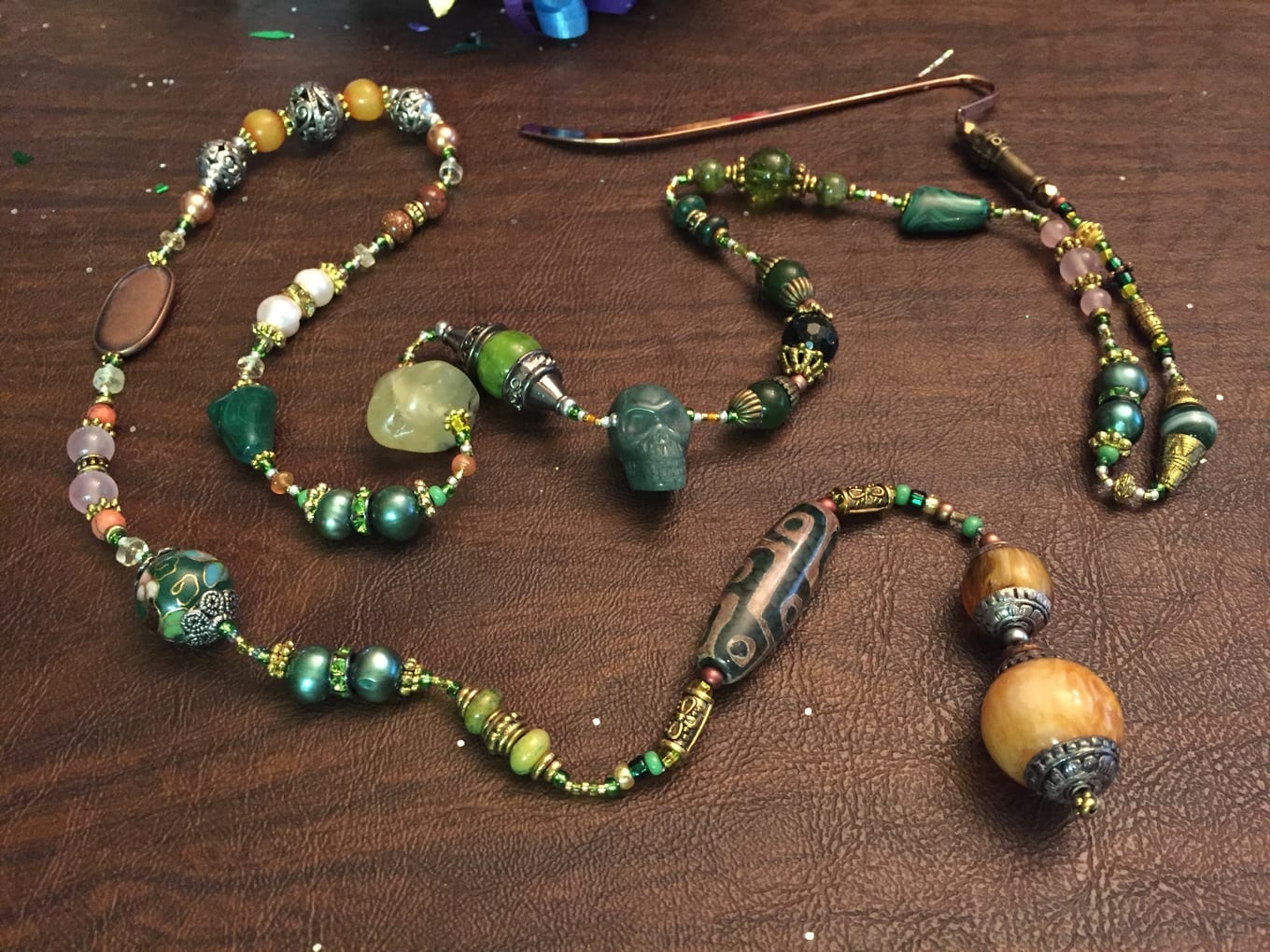 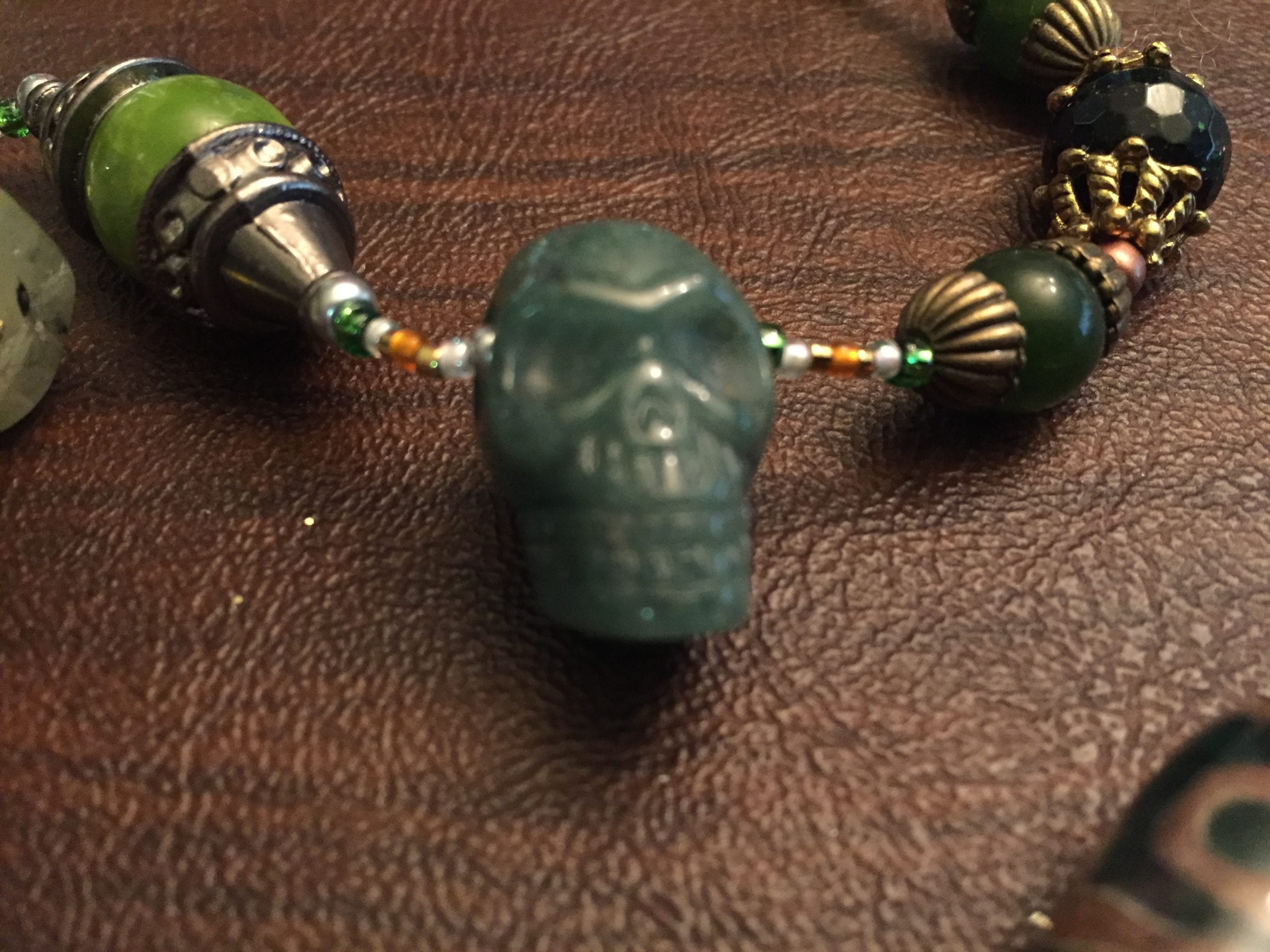 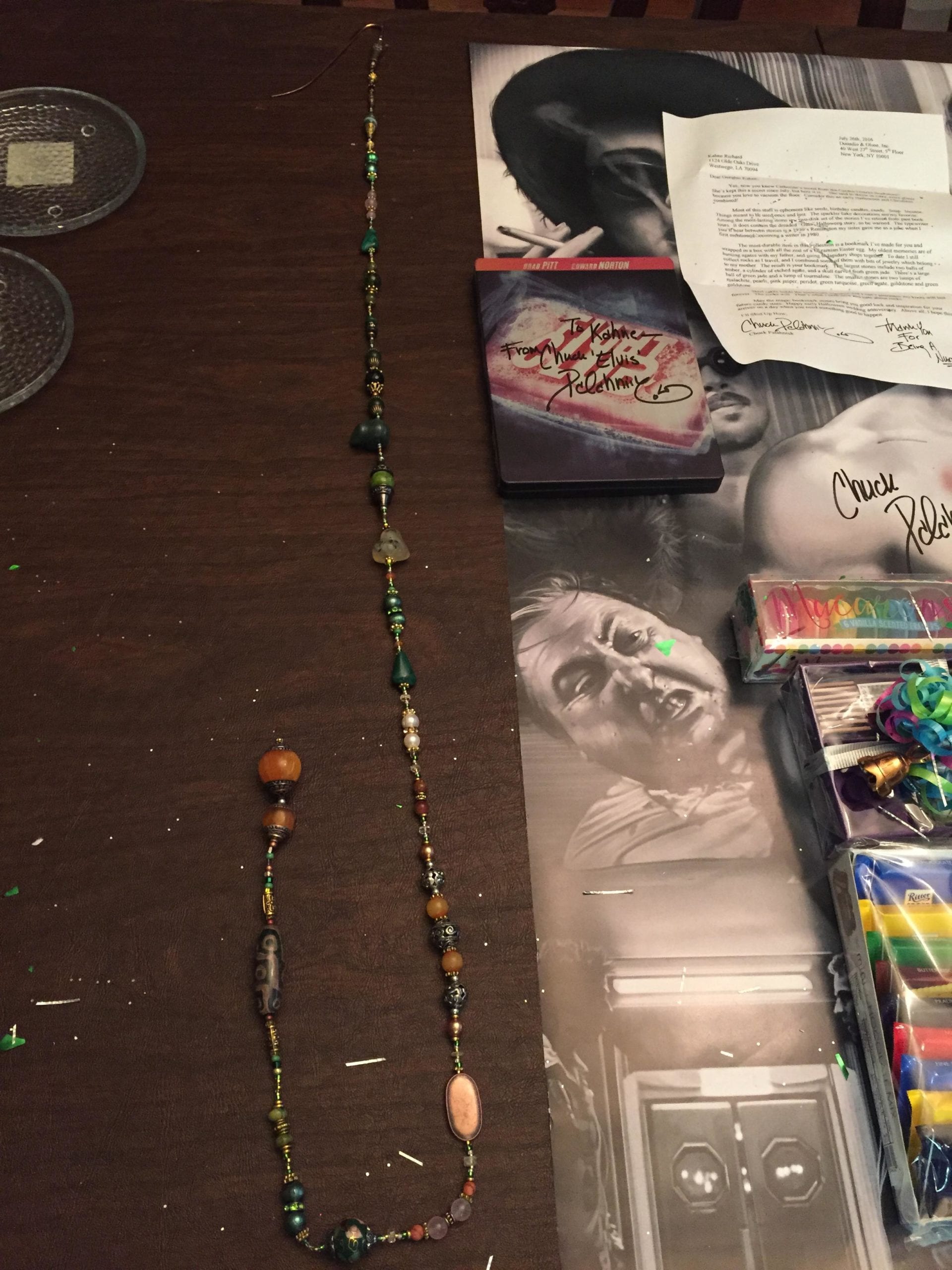 Knowing that he thought enough of me to give me things that belonged to his mother, things that he’s cared enough about to collect, is completely overwhelming.

He literally sent me a box of rocks and glitter, and I couldn’t have asked for more. 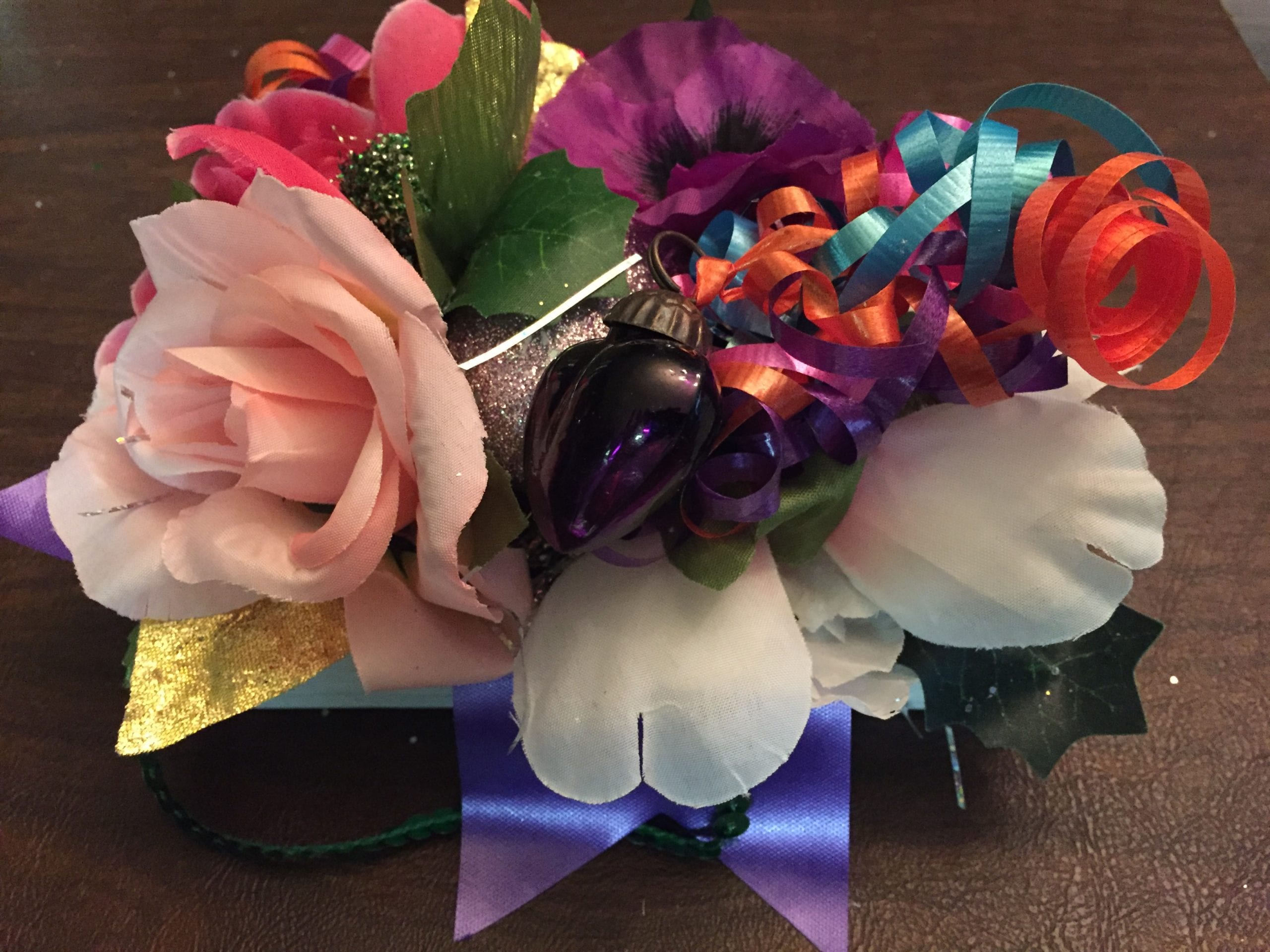 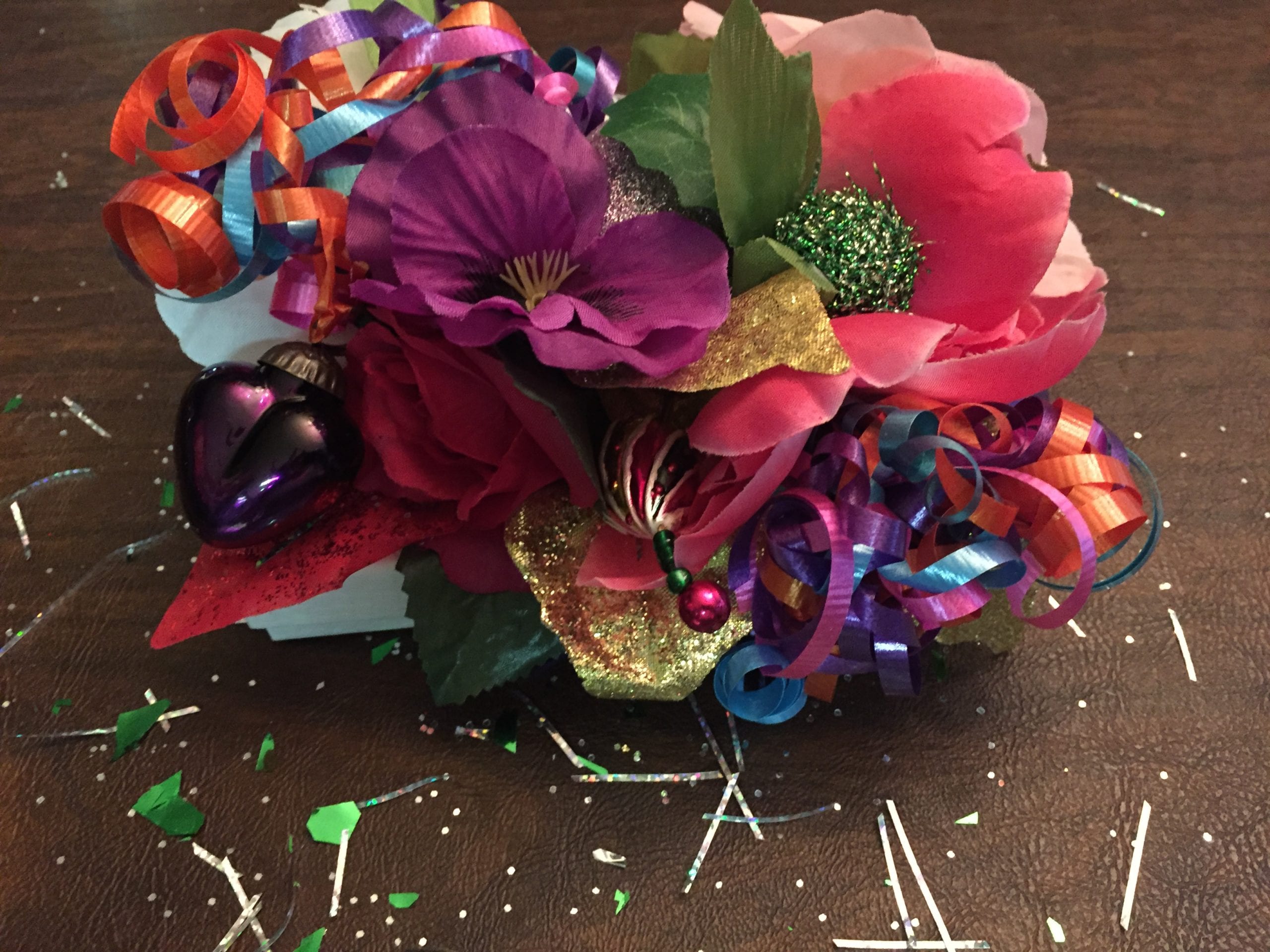 Truth be told, he didn’t HAVE to do anything. I would be just as thrilled to have met him, shook his hand, and moved on. He didn’t have to find out anything about me. He could have sent me a leftover bookmark from one of his old signings.

He wanted to know one of his fans.

I’m not his target demographic. I’m not a weightlifter with a Fight Club tattoo that thinks Tyler Durden was just a guy that fought a lot. I’m a middle-aged mother of a teenager that lives in the suburbs with a two car garage and a cat named after a cow noise. 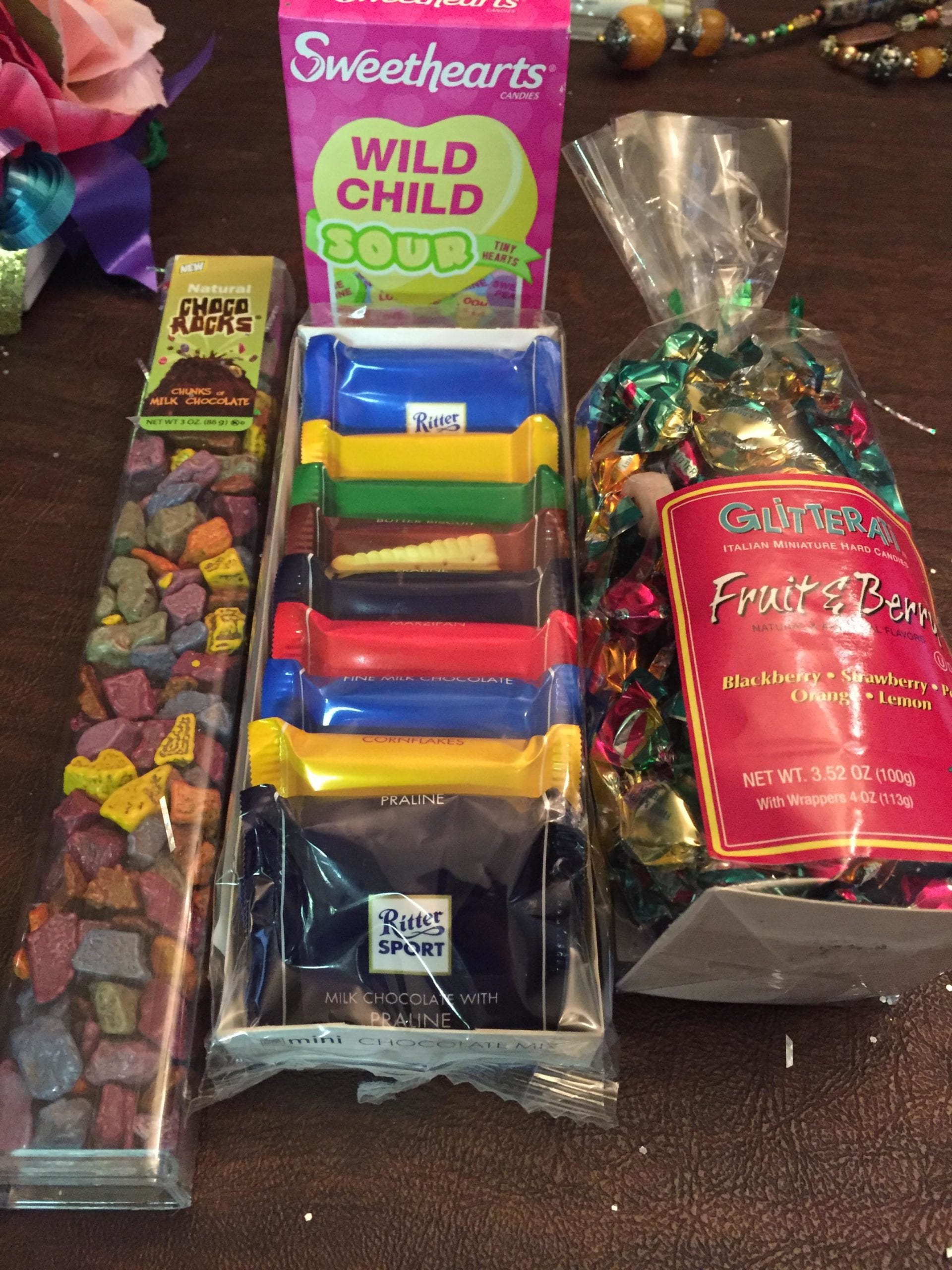 He CARES about his fans as well as being one of the most brilliant minds of our times.

And he uses the same brand of soap that we do. How awesome is THAT? 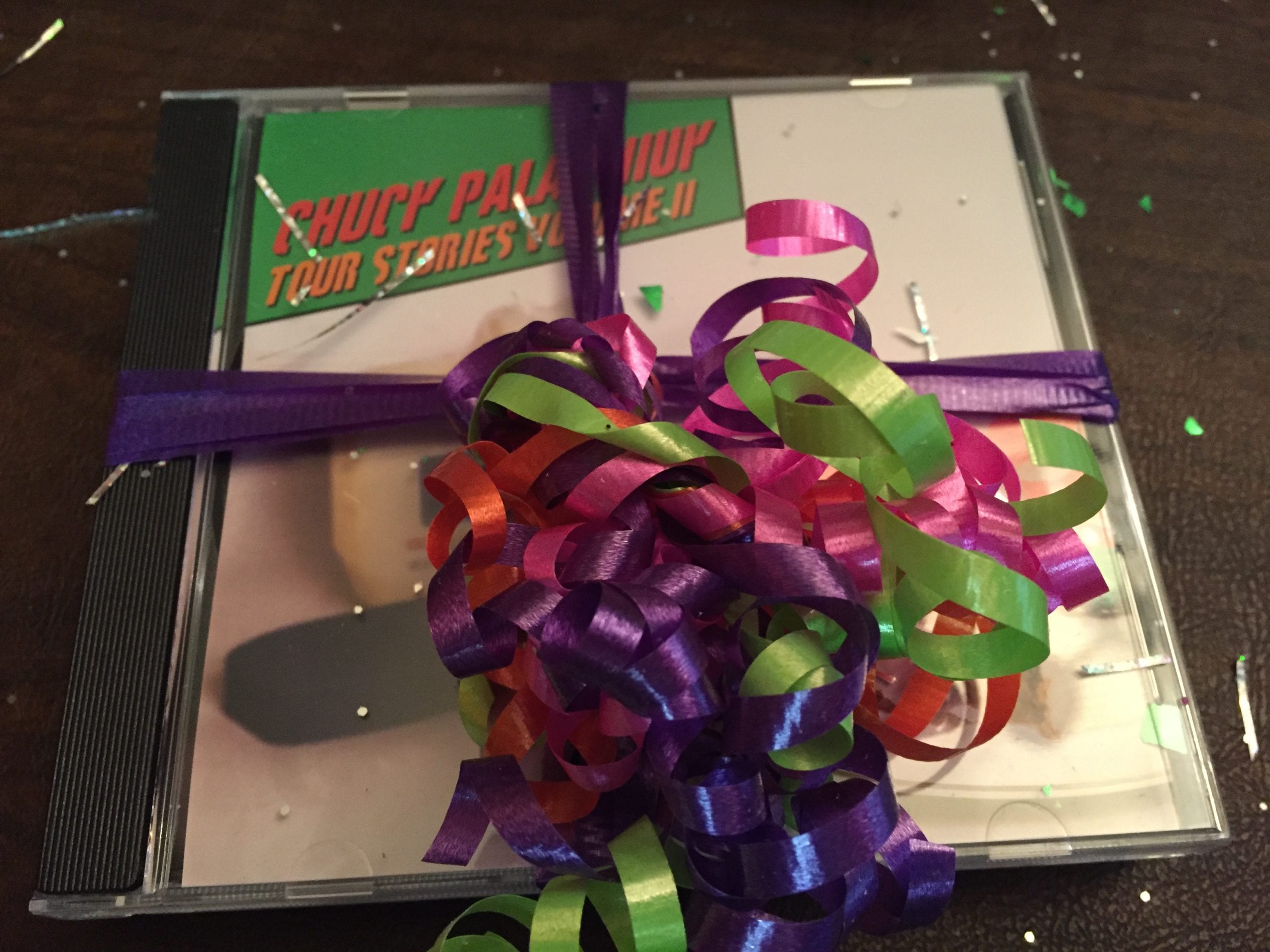 P. S. Sorry, Chuck, I’m never eating that candy. However, when I finally do open my candy store, it will go in a special display case.

Basically, Chuck Palahniuk is the coolest author on earth!