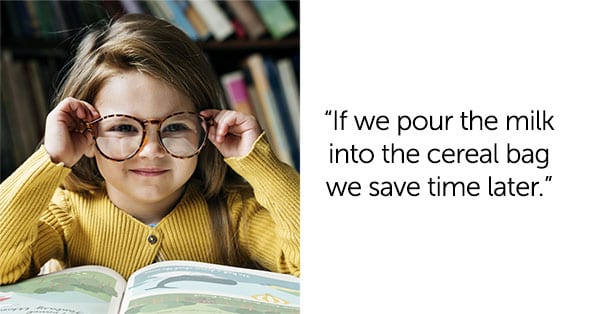 20+ Examples of Kid Logic That Are Pure Genius

Kids say the funniest things, don’t they? I swear, if I could walk around with a tape recorder all day just following my nephews and nieces around, I’d end up with straight up comedy gold.

The way kids process information and make sense of the world is often uniquely hilarious, which is why we’ve rounded up some the best examples of kid logic from Reddit. Enjoy!

Kid: Does God live everywhere? Even in my stomach?

Adult: Uh..I guess God exists in your stomach, sure.

My daughter told me she should have a princess bed because I have a queen [my wife].

My dad once answered the door to two little girls from the neighborhood (probably about 8 and 9 years old) and they were breathing really heavy.

Girl, pauses as she processes this new development: “Well, there’s a part where they have these paper lanterns that fly and there’s one in your tree and IT’S ON FIRE.”

Luckily it had already gone out and caused zero damage, but I still laugh at the fact that their opening line was “Tangled” and not “FIRE”

Kid: When I grow up I’m going to marry Mommy.

Kid: (thinking) Then how did you marry Daddy?

While discussing Hotel Transylvania, kid says “I know vampires aren’t real but if they are real won’t they get mad if I don’t believe in them?”

When my son was about 4 the neighbor kid told him, “Your mom hides the Easter eggs, stupid.” My son was thrilled and bragged to all the kids at preschool, “My mom is the Easter Bunny and she’s going to bring you a bunch of candy!”

My ex’s daughter found a stray cat and was so excited to show it off. One of my friends came over and she said, “Look at my new dog! She’s a cat!

I overheard some kids playing while I was on my porch one night. There were a group of 3 kids playing together, when a fourth kid approached them and asked “can I play with you guys?”

The group of kids eye each other before one kid steps forward and logically proclaims “you can only play with us if you swear!”

The new kid smiles and yells “BOOBS” at the top of his lungs and then they all commenced playing together. I was crying from laughing so hard.

For context: I used to live in a primarily black neighborhood and was one of only a handful of white people in the area.

I’m out walking my roommate’s husky/malamute cross (who resembles nothing so much as a Direwolf) when I see two boys about 6-7 playing in a fenced in yard across the street from me. I wave. They immediately stop playing and run over to the fence.

Kid 1 looks at him with what I can only describe as complete disdain in his expression. He’s clearly disappointed that his friend could be so stupid. In a tone that was dripping with condescension, he goes, “She’s -white-. They got the hookup on wolves.”

Me: where does milk come from?

Me: what about chocolate milk?

Nephew: from strawberry cows Me: what about banana milk?

From my then 4-year old daughter: “Why do they call them ‘onion rings’? They should be called ‘onion bracelets’.”

Not mine but a friends kid. Walking around local supermarket and kid sees (what I presume is for the first time) a person in a wheelchair.

Kid gets super excited, shouting to his dad, “DADDY, LOOK THAT MANS A CAR!”

My 5yr old neighbor rang my doorbell. I opened the door and he said: “Mom says I shouldn’t ask for cookies”.

My son was excited to start school and learn to read just like his big brother. So first day is over and I ask him how it went. He started crying, I’m like oh no baby what’s wrong?

Son: I didn’t learn to read yet. He thought he would instantly know how just from starting school, he was so bloody disappointed. I couldn’t stop laughing.

Me: Do you know what a lie is?

6-year-old: It’s when you say something that isn’t true, and you get caught.

I feel a career in politics beckons…

When my sister was little she saw a boy pee. So, next time she had to go, she stood in front of the toilet, dropped her pants, and tried to do the same except obviously it just went straight down. Then she ran to mom/dad very afraid and said that the neighbors dog must have bit hers off, and asked if they could make her a new one

18. The struggle is real

“I went to school yesterday (first day), why do I need to go again?”

My cousin believed that when you’re pregnant, the baby’s body lives in the bump and the baby’s head is inside your boob. When asked why ladies have two boobies then, she instantly replied ‘In case it’s twins, silly!’

When I was very pregnant with my son, a little girl (maybe 5 or 6) came up to my husband and i and very sternly said, “Are you married?” We said we were and she goes, “Good. Because if you arent married, you get to keep that baby but then you have to get spay-ded and neutered because we dont need anymore strays.”

“You have to kiss your wife at your wedding even if you don’t want to or you’ll get arrested.”

If we pour the milk into the cereal bag we save time later.

23. Create your own solutions

We have a reward chart that gives our 3 year old stickers for being good and bad.

He asked for a cartoon before bed, I looked at the chart and saw there were no good stickers for today. He has a massive tantrum, and chucks his cup of milk on the floor.

I calm him down. I see a spark go off in his head. He runs in the kitchen, then runs out with the roll of paper towels. “If I clean this up, will you give me a good sticker?”

From a kindergartner: “Girls have long hair so they can cry and blow their nose into it.”

I was applying to work at a coffee shop at my friend’s house filling out the application online. I asked my friend if I could use him as a reference, and if I should put “friend” or “employer” or something else. When all of a sudden, his little brother (age 7 I believe) asked me “Why do they (job) need to know who your best friend is? shouldn’t all they know is ‘Can you make coffee?’ ‘When can you make coffee?’”

As part of their routine physicals I always ask kids what they want to be when they grow up.

Me: That’s very nice. It’s fun being a doctor.

Kid: Well if I’m a doctor I’ll be rich. If I’m rich I can buy a car. And then I can hit my brother with the car and run him over.

Niece proceeds to count to 10.

Are you out of money? Go to the Dollar Store to get more dollars.

If you enjoyed this, you should read:

Mom asks husband for baby updates, gets photoshopped nightmares instead.