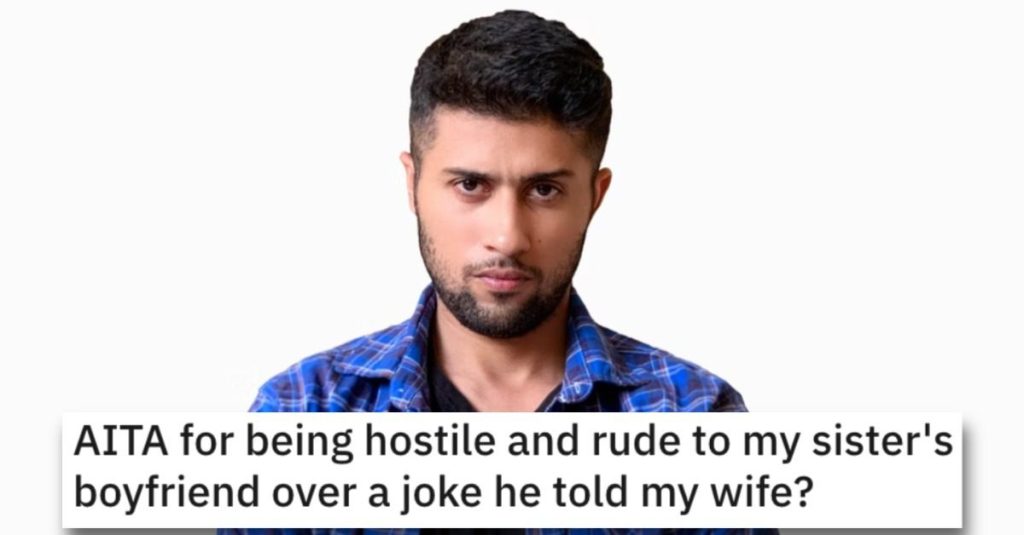 Some jokes go over like lead balloons…and that’s never a good thing!

And it sounds like that’s what happened here in this story from Reddit’s “Am I the A**hole?” page.

Oh, boy, this could get ugly…

AITA for being hostile and rude to my sister’s boyfriend over a joke he told my wife?

“My sister (26) brought her new boyfriend (30) over to our parents house to meet him for the first time, My wife and I came as well.

We met the dude, he seemed ok-ish at first but he then started asking weird and personal questions. My wife had a breast cancer and got a single mastectomy last year. She told the story to my sister’s boyfriend and he was like “oh” then he stared at my wife briefly then “playfully” said “without even asking, I can pretty much tell which one got the blow”. We were floored.

My wife could barely keep a straight face. she lied so she could leave the table cause she was literally about to tear up. I just looked at the dude and said “Are you serious?” he said “What??!! I was just joking bro” I started asking him to explain the joke to me, He just stared. I asked him again to explain it to me in details but still got no answer.

My sister asked me to stop because clearly he got uncomfortable, but I insisted he explain the joke to me cause clearly….my wife and I didn’t get it. Things got awkward with him avoiding eye contact while I just stared at him the entire time. I still insisted and asked him to explain the joke right there and then, but seconds later he said he needed to step outside to make a phone call.

Turns out he got in his car and left. My sister had a meltdown screaming and berating me for how I treated her boyfriend. Calling me hostile with anger issues to scare her boyfriend out of our parents house. I told her he was overstepping and made my wife uncomfortable to the point of crying.

She actually called my wife “such a princess” and said she is soft and can not take some teasing. I had an argument with her and my parents intervened, I took my wife and left.

My dad called me later and said that he understood how hurt my wife felt but my sister’s boyfriend was visiting for the first time and I showed hostility and aggression instead of just ignoring him. He encouraged me to reach out to him and my sister later and talk it out but I declined.

Now it’s time to see how Reddit users reacted to this story.

One reader said this guy is NTA and that he handled this perfectly. 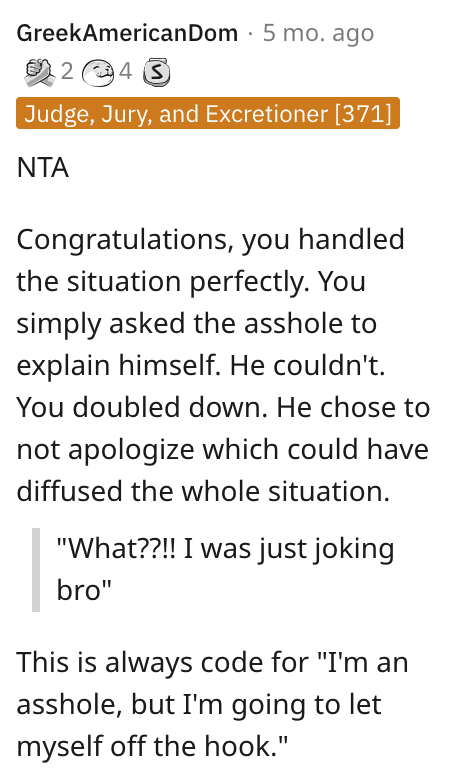 Another individual who dealt with cancer said the man’s sister needs to dump this jerk. 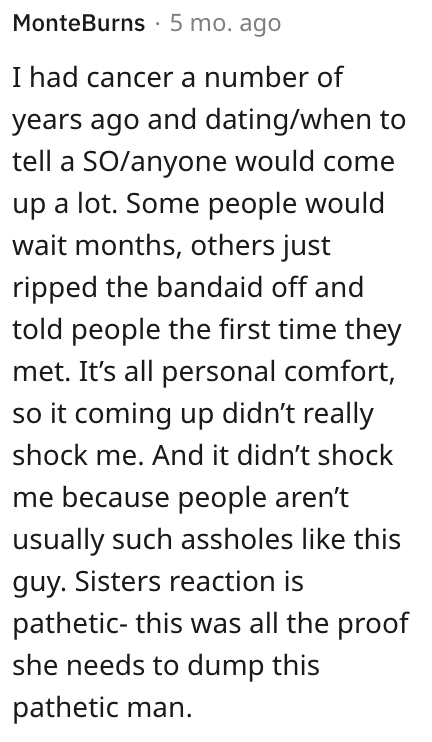 And this reader also said he’s NTA and that he did the right thing by standing up for his wife.