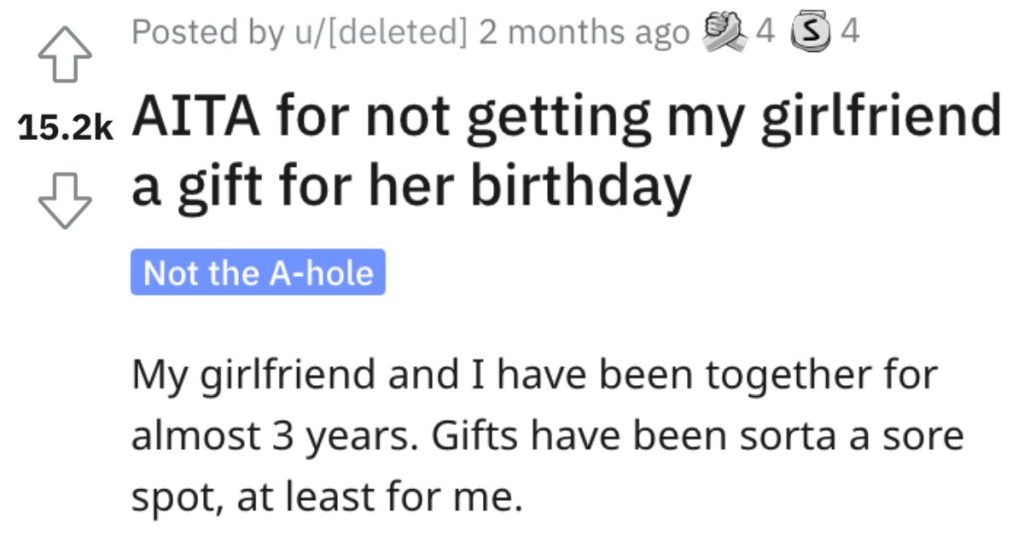 A word of advice, fellas: get your girlfriend or your wife a present for her birthday NO MATTER WHAT.

Even if you’re in a fight or she tells you she doesn’t want anything, you still do it…or else…

Check out this story and see if you think this guy acted like a jerk.

AITA for not getting my girlfriend a gift for her birthday?

“My girlfriend and I have been together for almost 3 years. Gifts have been sorta a sore spot, at least for me.

So the first year we were together she made me some cake things for my birthday. Which was nice and everything, but then she took like half of them back to give to her family. It just seemed kinda weird like “here’s your present but I’m taking part of it back”.

Then her birthday came that year and I did a bunch of stuff for her, got her balloons, flowers, a card and some gifts.

Christmas came and I gave her a few gifts, and didn’t get anything. Following birthday of mine, nothing. For her birthday that year I got her a gift but I didn’t go all out like the first year.

Last Christmas she wanted seat covers for her car, I bought them but wanted to see if she even gave me a card or anything, which she didn’t. We went to lunch a few days after Christmas she kept insisting on coming over. I felt like I had to give them to her since they were still wrapped and sitting in my living room. But that was sorta the last straw with me and gifts with her.

My birthday came and same thing, nothing.

So in almost 3 years of birthdays and Christmases, I got half a gift. I’ve tried talking to her about it but she just claims “she forgot ” or “has so many other people to shop for for Christmas” etc.

She was dropping hints before her birthday for different stuff, so I knew what she wanted. I just didn’t want to buy it.

Her birthday came and I didn’t get her anything. I figured why keep putting in the effort and buy gifts for someone that can’t be bothered to even make me a card. It’s not a financial thing either because we both make about the same amount, and like I said I’d appreciate a homemade card that she drew or something.

So we went out to celebrate on Saturday. She kept saying she was excited to get her gift. I took her out to dinner, then she wanted to come over. So she came over to my house.

She kept looking around for a while. Then said “okay I’m ready to open my gift “. I said “what gift?” She said “ha ha seriously now… it’s my birthdayyyy” I said ” I knowww”. She said “quit messing around”. I said “I’m not messing around, I really didn’t get you anything “. She said “then why did I come over?” I said “I don’t know you wanted to.” She said “you really didn’t even get me a card?” I said “no, I just figured we’re not doing gifts anymore, I mean you don’t give them so…”

She gave her usual excuses “you’re hard to shop for” (I’m not I tell her what I’d like and some stuff is only 5-10 bucks) “well I forget” and a few other things.

Then she said “it’s shouldn’t be about receiving it’s about giving, but thanks for being a passive aggressive a**hole and ruining my birthday “.

AITA for not getting my girlfriend a birthday present?”

This reader said he’s NTA but asked a good question…why is he with her? 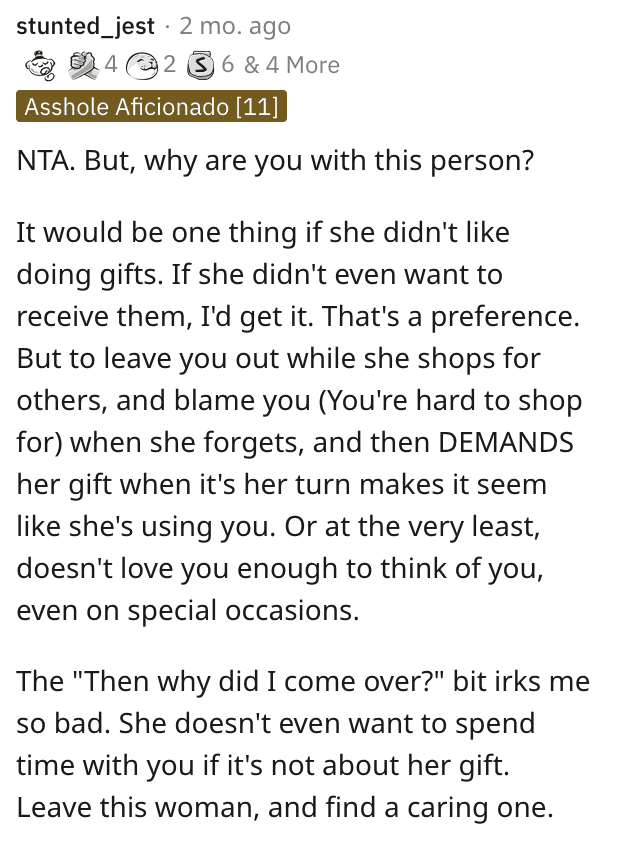 And this individual said this guy is NTA and that his girlfriend is NUTS. 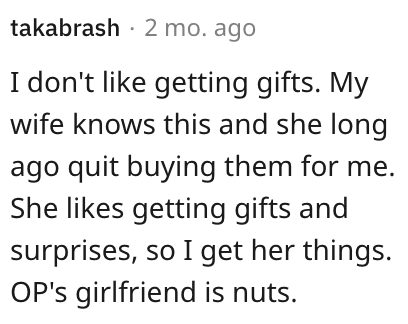 Another Reddit user also said he’s NTA and we’re kind of blown away by the situation. 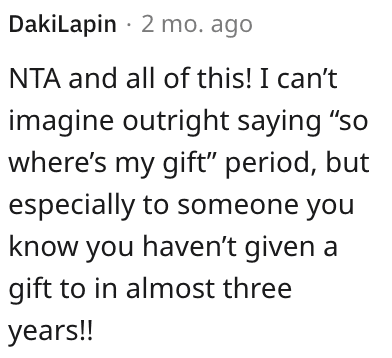