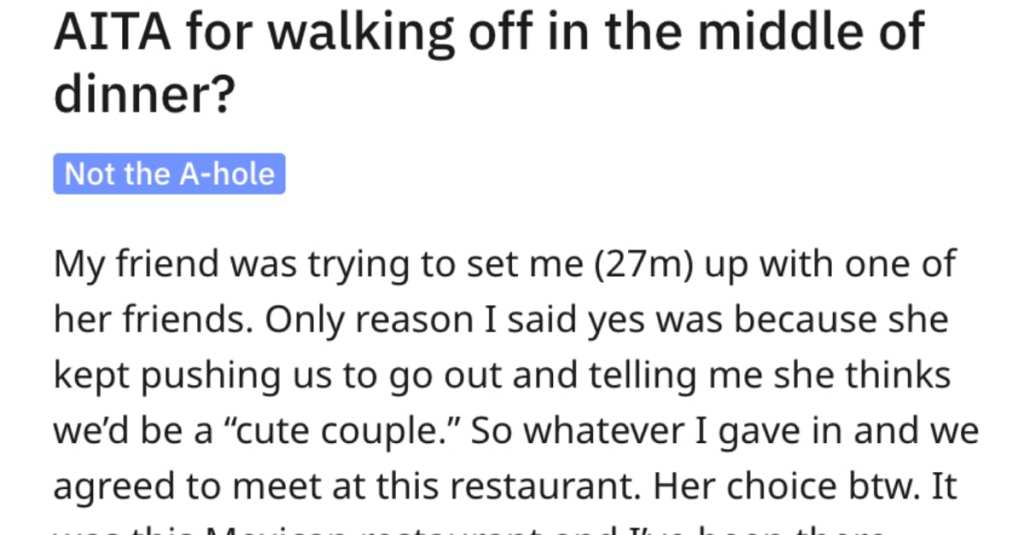 Guys Asks, “Is It Ever OK to Walk Off in The Middle of Dinner?”

There are social rules and constructs and expectations, but I think most of us realize there are always times those things can be broken – for the right reason.

Getting up in the middle of meal isn’t polite, sure, but if the circumstances warrant it, don’t you think it could be better than the alternative?

This person thought so, but then started to rethink their choices and took to Reddit to find out whether or not their initial reaction had been wrong.

It all began with a romantic setup – and during covid times, to boot.

My friend was trying to set me (27m) up with one of her friends. Only reason I said yes was because she kept pushing us to go out and telling me she thinks we’d be a “cute couple.” So whatever I gave in and we agreed to meet at this restaurant. Her choice btw. It was this Mexican restaurant and I’ve been there before. They make some really good enchiladas.

The tables are spaced out because of covid and obviously not a lot of seats available for people who wanna eat so we spent like 15 mins waiting to get a table.

The date started throwing up major red flags – being rude to the waitress – pretty much immediately.

This girl was already getting impatient and literally the second we get a table, she’s talking shit to the waitress who came to ask us what we want to drink. About how they shouldn’t be open if they’re not able to cater to their customers. She was just being super rude to this lady for absolutely no reason. Funny thing was she’s being totally nice to me.

It continued with her insisting she’d ordered something a certain way to whining because there were no burgers on the menu (at a Mexican place).

First gave her s**t because she brought ice in her drink but never asked for it to have no ice (which I pointed out to her but she didn’t believe me because she knows she asked for no ice), then again got mad because there wasn’t any burgers on the menu.

It’s a Mexican restaurant. I told her if she wanted burgers we could’ve gone to a place that serves burgers.

When OP tried to talk her out of her mood, she insisted she was right (again) and that the place and the waitress was horrible and the ones in the wrong.

Then, she cursed at the waitress.

OP was done, and it’s hard to blame him.

But she claimed this place did serve burgers because she’s been here before. Again starts giving the waitress a hard time and I tried hard not to let it get to me up until she called the waitress a f*cking dumba$$ and to do her job.

At that point I apologized to the waitress then told the girl we’re done here. I took out my wallet to pay for the drinks, also a tip for the waitress and told her I’m not putting up with her bulls**t anymore. This girl was calling for me but I walked out the restaurant and drove off. She came in a separate car btw so not like she was left stranded.

She turned on him immediately, calling him a horrible date (and worse) for leaving her there (even though he paid and she had her own car).

His friend is embarrassed about the way he acted, too.

My phone was blowing up, all of the messages from this girl where I’m pretty much called her worst date and other names too.

Then my friend was giving me a hard time because now she’s embarrassed to be around this girl knowing that I just walked off during our dinner. And she says I could’ve handled that better than acting like a complete jacka** if I didn’t like the way she was acting. At least could’ve been a gentleman and made it through the meal instead of humiliating her.

OPs mom was a waitress and we all have our lines in the sand, right?

Idk that stuff really bothers me. My mom was a waitress and I’d be a her work all the time after school until her shift ended. Saw the way customers treated her sometimes so I guess it was personal for me seeing how this girl was being.

Not sure if I let my emotions get the best of me and if I was in fact an a$$ the way I reacted.

There’s no reason to handle people like this with kid gloves. 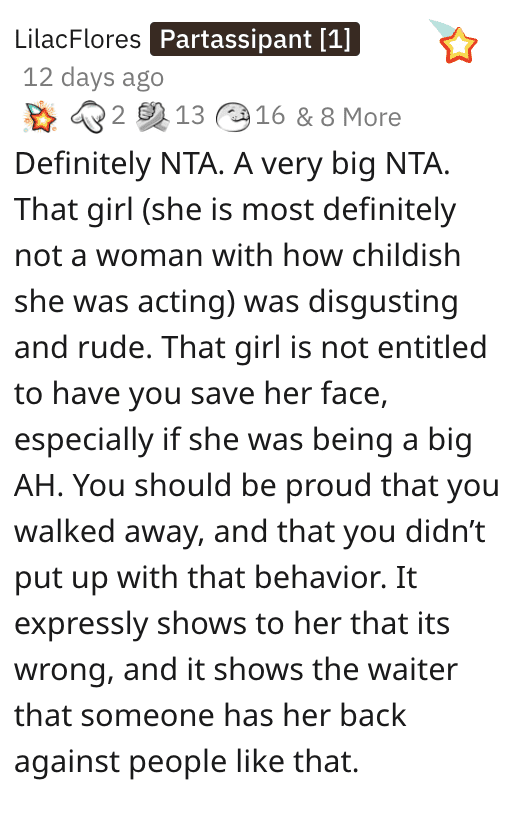 This is an easy way to let someone show you who they are, and she definitely did. 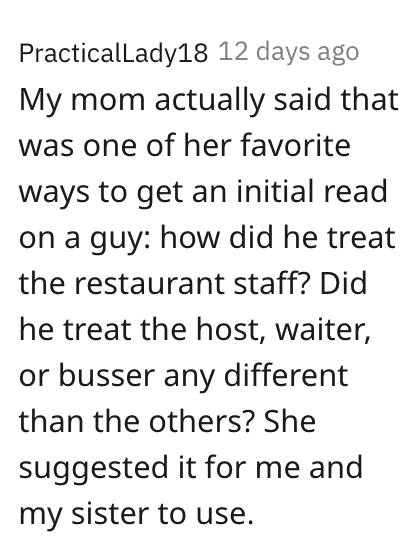 I had no idea this was so common, but I definitely approve.

Times are tougher than usual, too, which makes her behavior twice as bad.

Everybody say it with me. 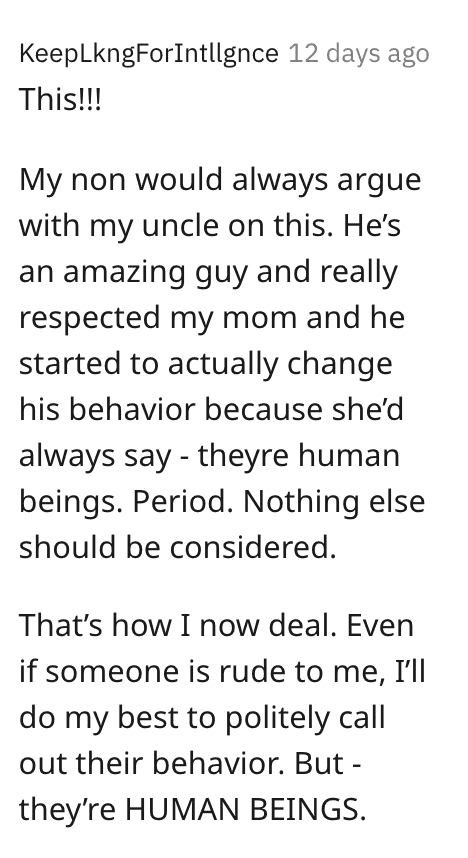 I want to clap this guy on the back, buy him a beer, and then set him up with one of my single friends.

Say you agree with me in the comments!