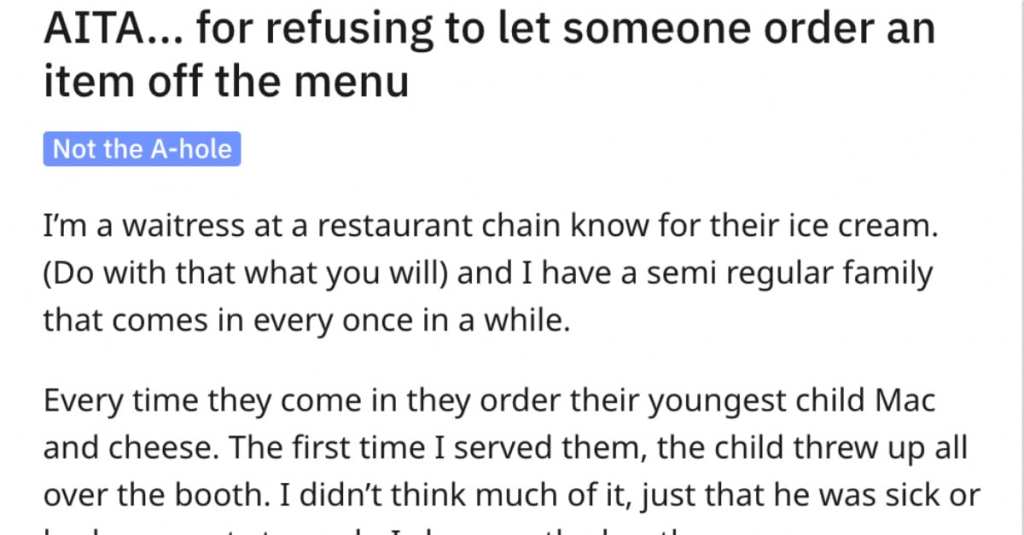 Is It Wrong for a Waitress to Contradict a Parent’s Order for Their Child?

I’ve been a waitress, and let me tell you, it’s not as easy as it looks. It takes time and the right sort of personality to really do it well, and even when you’re really, really good at your job, it doesn’t always translate into making more money.

Which is to say, waitresses are already under-appreciated, and that’s before women like this mother waltz into the picture.

This waitress has a regular family who comes in to dine, and after waiting on them a few times, she started to notice a pattern – their youngest child would order Kraft Mac& Cheese and then proceed to vomit in the booth.

I’m a waitress at a restaurant chain know for their ice cream. (Do with that what you will) and I have a semi regular family that comes in every once in a while.

Every time they come in they order their youngest child Mac and cheese. The first time I served them, the child threw up all over the booth. I didn’t think much of it, just that he was sick or had an upset stomach. I clean up the booth.

It happened again and again, the child never really even attempting to get to a bathroom or a trashcan, the family just expecting the mess will be cleaned by someone who is not them.

The next time was the same thing. Mac and cheese then puke. Again in the booth and on the table.

This is an every time occurrence, the kid orders Mac end cheese then throws up. The kid never gets to the bathroom, and most the time he doesn’t even make an attempt to leave the table. I believe once he started walking to the bathroom.

Finally, the waitress says something. Like, should you maybe rethink this order since it makes your child violently ill?

The mother laughs and says she knows he’ll get sick but “he wants it.”

This most recent time they came in and I was their waitress the child went to order Mac and cheese again, and I asked the mom. “Is he okay to have that? He gets sick every time….” the mom said “Oh yah Kraft Mac and Cheese makes him sick, but he wants it.”.

I said “ma’am, I’m sorry but I don’t think your child should order this if you know he’s going to puke from eating it. And quite frankly I really don’t want to have to clean up vomit tonight”

The waitress doesn’t let it go. The manager backs her up, the kid gets chicken tenders and keeps his dinner down, and everyone is (seemingly) happy enough.

The mom threw a bit of a fit, but when I said, “why are you allowing your child to order a food that makes him sick, just to have someone else clean it up.” And the manager had came over and was agreeing with me, she ordered him chicken tenders and fries instead.

Some people have wondered whether or not the waitress might have overstepped her bounds, so now she’s curious.

Was I in the wrong for not wanting/allowing him to order the Mac and cheese that makes him sick? I’ve shared this story with a few people and I’ve had some mixed reactions.

Here’s what Reddit had to say on the matter…

Why would any parent knowingly give their kid something that makes them sick? That they would do this really already makes them the a$$holes, if you ask me. 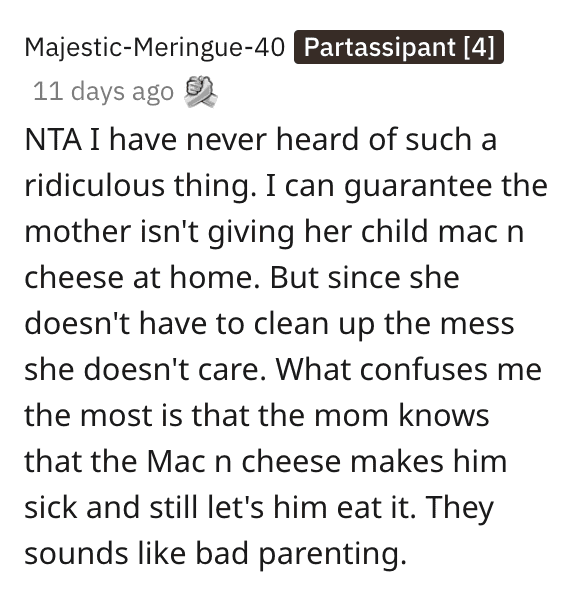 Not only was OP not wrong here, she also could have potentially saved the kid’s life (this time around, anyway). 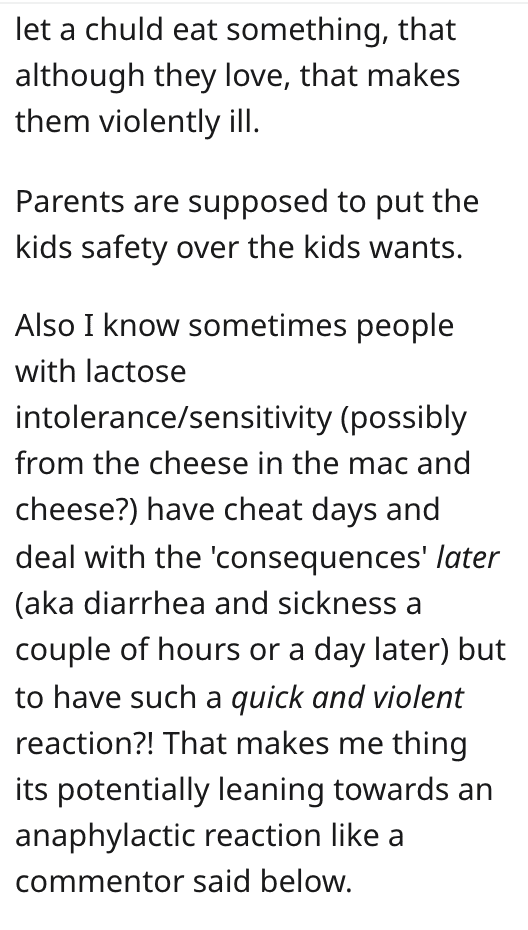 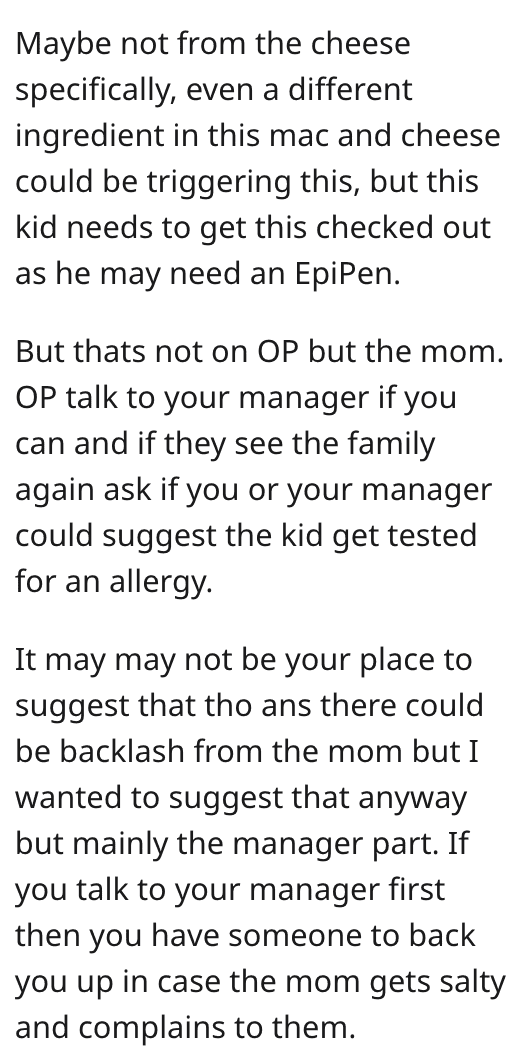 People who have been in the kid’s shoes are weighing in on the waitress’s side, too.

The kid really could have bigger problems.

And that maybe she should even consider reporting it as child abuse. 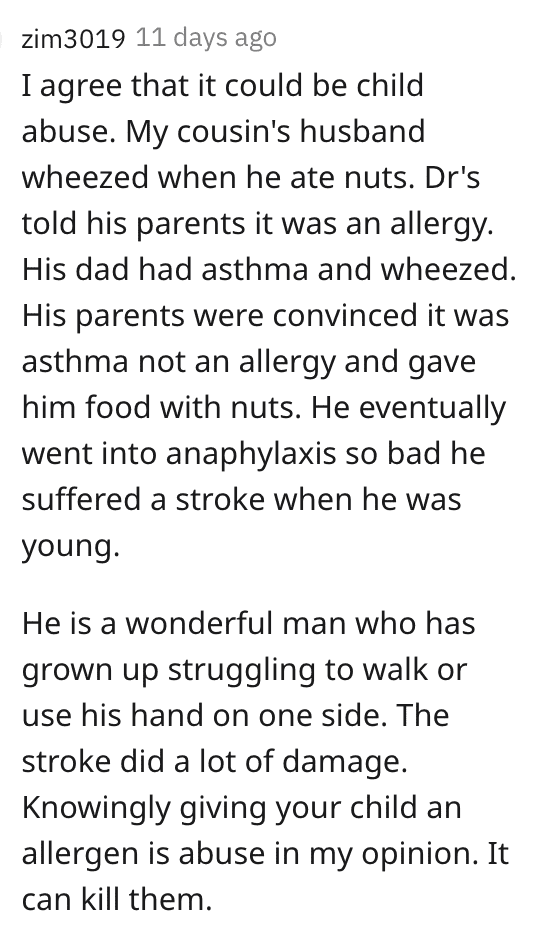 I would insist on cleaning up my kid’s puke if he lost it in a restaurant. Wouldn’t most people?

Are you as appalled as the rest of us? Tell us in the comments why or why not?