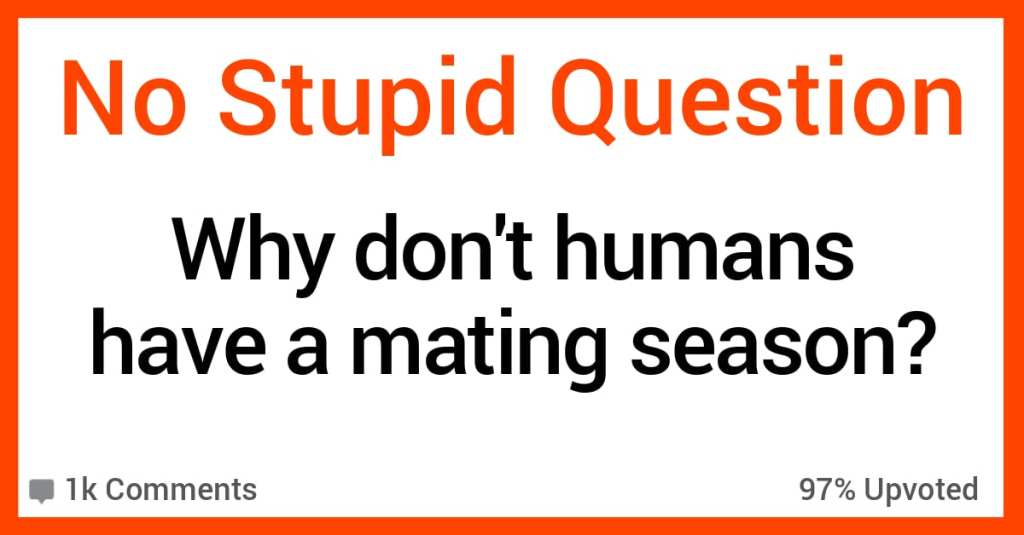 Have You Ever Wondered Why Humans Don’t Have a “Mating Season?”

The Reddit forum r/NoStupidQuestions is the place to go when you have a query you’re too ashamed to ask your friends…or because you’ve already exhausted your friends asking this particular questions.

This one should really get those brain-wheels greased – if humans are mammals just like all the rest (or close enough), why isn’t there a human mating season?

If you’re curious now, here’s what 15 people had to say about it!

Ugh it’s terrible. I wish we would just have mating seasons.

To hell with all this courtship and mind games.

There’s no definitive answer, but one part of it might be that humans are already communal creatures, so there’s no need to synchronize any sort of mating season, because we’re already together.

Additionally, human babies take a long time to mature, and are often looked after by more humans than just the mother, this makes asynchronous births easier, since there will be more humans to help with child care.

Which is why birthdays in October and November are more common…

Organisms that can’t farm or stockpile resources may have no choice. If they don’t all birth when resources are increasing or abundant (usually Spring or Summer), the offspring will die. Of course disasters can strike e.g. a drought leading to famine and a mass die off for a species.

It also worth noting though that most species which require huge amounts of resources usually aren’t too numerous (humans are again another exception there, but evidence is rapidly mounting that we are using up our resources and screwing over the planet which could lead to us causing our own extinction….so yay?)

11. Hahahaha think about it.

Imagine everybody having a break off work to go out and find a mate.

Chimps and gorillas don’t have mating sessions either.

Everyone I know seems to have a September birthday which means that December is, apparently, mating season.

Plus since we have to take care of them for years anyway, it doesn’t really make sense to avoid a winter. We’ll have to do the next one after all.

And writing that down, our species originated in a region with no winter. So the need for a mating season would probably be a lot less prevalent anyway. (Do other big mammals in the African plains have mating seasons?)

The human female reproductive cycle repeats every month instead of every year.

Our mating season is all the time except for one week a month.

Also since the time it takes for human babies to mature enough to no longer need parental support is longer than 1 year, it’d be irrational to have an annual season for mating.

We don’t have a firm answer for this in nature, but generally, mating seasons are found in species that a) have a long gestational period; and b) have significantly unequal access to food year round.

Typically the mechanism is a hormonal cycle where the female is only receptive to mating under particular conditions (usually weather and calorie related).

Hardly any apes are seasonal breeders, and the few that are likely developed our common ancestors split. So while we don’t have a firm answer in nature, the most likely answer is that it’s because the ancestors of humans a few million years ago had relatively even access to food throughout the year. Our closest relatives (chimpanzees, gorillas, orangutans, and bonobos and gibbons) are all continuous breeders as well.

4. We can feed ourselves any time.

Animal mating seasons typically coincide with the season where resources (namely food) are most abundant. Pregnancy requires a lot of energy, after all, so there’s little point for a deer, for example, to try and have a child in the middle of winter when food is at its scarcest.

Humans, by contrast, have been less dependent on seasons being hunter-gatherers. More importantly, however, by possessing the capacity to be pregnant at any point in the year, males and females are ‘forced’ to stay in close proximity all year long, rather than have the males buggar off and only come back during mating season.

This allows the female to secure food, care, and resource for her and her progeny during the entire year, and allows for a better chance for the offspring to survive (as human offsprings are extremely dependent on their caretakers for a longer period relative to other animal species)

If you live in Canada, I’d call it winter.

One of the more unusual aspects of human mating is that unlike most species, ovulation / fertility isn’t on display. If you’ve ever owned a female dog, you’ll know they go into “heat” and begin spotting, leaving a trail everywhere. In the wild this would lead a mate to the female during her fertile window.

Humans are one of the very few if not only(?) species that have this virtually entirely hidden… It requires that the male maintain courtship on a more continual basis… and it’s also heavily involved in preventing something akin to a mating season.

1. Details, because you know you want them.

I think it’s important to point out the differences between a menstrual) cycle and an estrous cycle. In terms of menstruation, humans are among a very limited group of mammals. Menstruation is the shedding of the uterine lining (endometrium), whereas estrous cycles involve the re-absorption of the endometrium.

Giraffes (estrous cycle) seem to have a pretty subtle process that requires the male to taste/smell the urine of a female in order to tell if they are fertile or not. This can mean that males will headbutt a female in the bladder to get them to pee.

Don’t you just love stuff that gets your gears grinding?

What do you think about these responses? Are you buying it? Tell us in the comments!