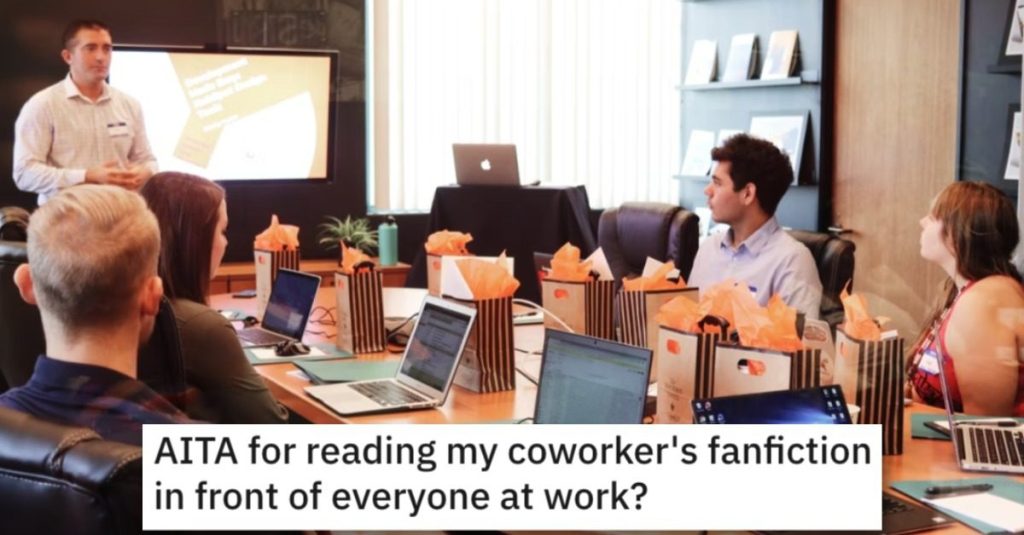 He Read His Co-Worker’s Fanfiction in Front of Other Employees. Did He Act Like a Jerk?

I don’t want to give anything away, but this guy sounds like a total d**khead…like 100%.

But I don’t want to sway you in any way!

So check out this story from Reddit’s “Am I the A**hole?” page and let us know what you think in the comments.

AITA for reading my coworker’s fanfiction in front of everyone at work?

“I guess the title sounds bad but please hear me out.

I (27M) am a general manager at a fast food restaurant -not gonna say which bc I dont want to get in trouble- with my assistant manager “Sophie” (23F).

Me and Sophie get along pretty well, we joke fight about stuff all the time and like to prank each other a lot. Like prank calls or making the other do fake orders or writing fake surveys about the other. Or splashing soda on the other.

We end up working together a lot since we get a bunch of callouts especially at night and sophie likes to pick up extra hours. we’ve both climbed up in the couple years that we’ve worked there and have a good relationship

When its not busy Sophie likes to write fanfiction on her phone which I sometimes tease her about. a while back i made sophie read me a line that she was writing and we were making jokes about it.

Last week I suddenly remembered the fanfiction again and decided to try and find it. I remembered the line she had read to me and was able to search for it online using quotation marks

I’m not gonna say which show it’s from because i don’t want anyone to find it but it was shocking to read. pretty much the two characters in it worked at a fastfood chain and ended up falling in love. it got pretty graphic at some parts too. the main character was essentially a representation of Sophie and the love interest was basically me.

I mean right down to copying conversations that we’ve had at work. He even had a wife that he was cheating on to be with her. (I’m married but I would never do such a thing.)

Anyway a few nights ago Sophie and the rest of the team threw a party to celebrate a couple of “wins” and of course Sophie pranked me by shoving a cupcake in my face. So I remembered what I read I thought it would be a good prank so I pulled up the fanfiction on my phone and started to read it. When she realized what I was reading, Sophie’s eyes started to tear up which I was not expecting. The rest of the team was joking around with her but she ran out of the party.

Now she’s not showing up to her shifts or answering my calls or texts. It’s weird that Sophie’s acting like this since she usually loves pranks and stuff so now I’m wondering if I took it too far? But I also feel like she shouldn’t have been writing those things about me and her too.

And another individual made a good point: this woman is his subordinate. 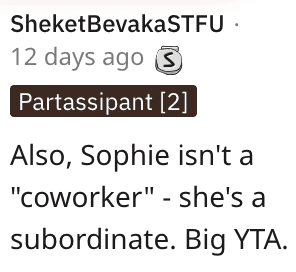 One individual said this should have been a wake-up call but he treated the situation differently. 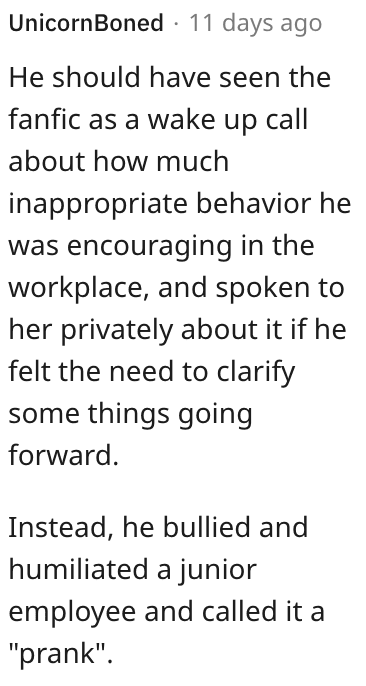