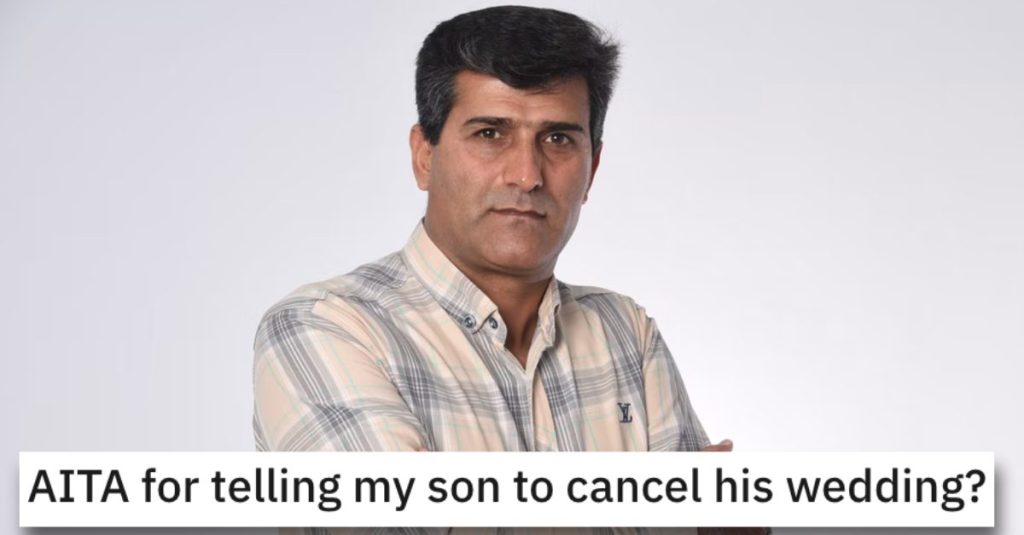 He Told His Son to Cancel His Wedding. Is He a Jerk?

And here we go again!

Read this story from Reddit’s “Am I the A**hole?” page and let us know if you think this father is out of line for suggesting that his son cancel his wedding.

AITA for telling my son to cancel his wedding?

“My son is getting married and he said that I have to come alone to the wedding (not bring my husband) or I can’t come at all.

Here’s my backstory: I’ve (49M) spent my 20s trying to convince me that I am a straight man. During that time, I got a girl (we were 24) pregnant, and we had a son together (now 25M). We were never serious, and I told her about my struggles with my identity already before we slept together.

Young and stupid, not much to do about it. We didn’t get married, but we did raise our son together. He spent every other week with me, and I have loved every moment of being his father. I met my now husband when I was 35. He is a great guy, and we have been married for 14 years. My son considers him his stepdad, my son’s mom jokes about him being her gay best friend (they really are very close), and he makes me so happy.

My son is getting married to his fiancee in 4 weeks. Just last week I received the wedding invitation, but it didn’t mention a +1, so I just assumed my husband would get his own. He didn’t, so I called my son’s mom and asked her if she got a +1 invitation, and she said yes (she is married too).

My son and his fiancee came over for dinner two days ago and I casually asked them about it. My son got a bit embarassed and said that they aren’t really inviting stepparents, just their parents. I said that okay, but his mom told me her husband is invited. His fiancee then said that they would just prefer to have a “non ideological wedding”.

My husband looked so shocked, and I was honestly just hurt. I told her that sounds a bit homophobic, to which she replied “i’m not a homophobe, I just don’t want to deal with this at my wedding” and I was like “what do you mean”. She said “well you know, it’s a church wedding”. I said “well you know, we won’t burst into flames in the pew”.

She got upset and demanded they leave, and went to wait for my son in the car. My son was almost crying and he appologised to me. I told him I love him, and he should really cancel or postpone this wedding, because this woman is showing behaviour that will only get worse. He called me an AH for interfering in his personal life.

His mom says he’s old enough to do what he pleases, but what they did to us is wrong. My father (no shock there) thinks I should just man up and be a father at the wedding. My friends say bridezilla is the AH, but my brother said I am an AH for not respecting my son’s wishes about the wedding.

This person said the future daughter-in-law is the a**hole here. 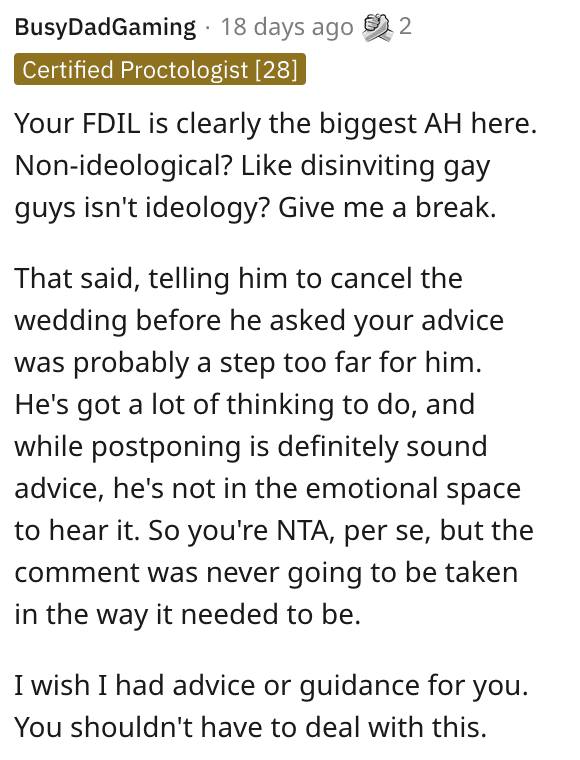 And this Reddit user said he should talk to his son honestly and tell him he has serious concerns about this relationship. 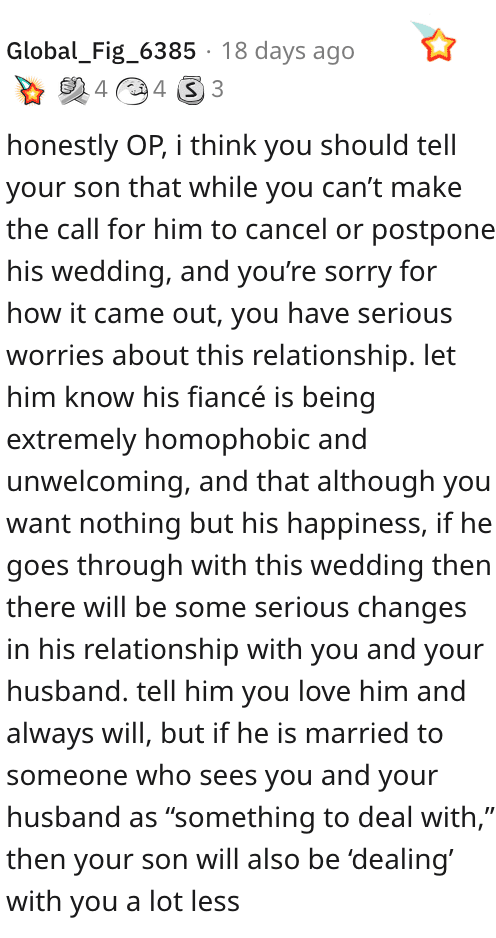 And another individual said this guy’s son is immature and a coward.