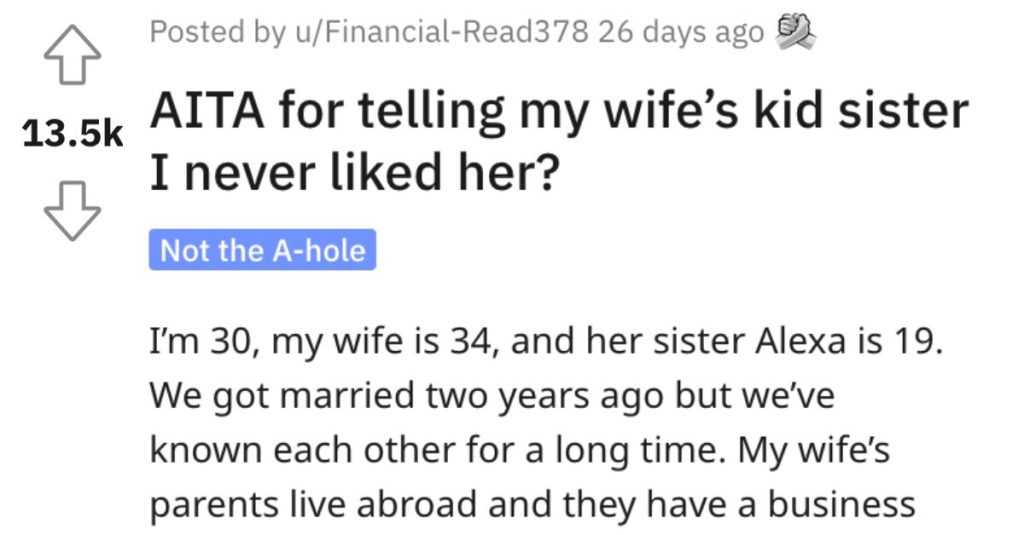 He Told His Wife’s Sister He’s Never Liked Her. Is He a Jerk?

Even if it’s gonna be painful.

And that brings us to today’s story from Reddit’s “Am I the A**hole?” page.

Take a look at this guy’s story and see if you think he acted like a jerk or was justified in what he said.

AITA for telling my wife’s kid sister I never liked her?

“I’m 30, my wife is 34, and her sister Alexa is 19. We got married two years ago but we’ve known each other for a long time. My wife’s parents live abroad and they have a business there. 11-12 years ago they sent Alexa to the US to live with my wife and get her education. My wife is basically her only parent. She does everything for Alexa.

I’ll be honest. Alexa is a brat who honestly gets on my nerves. It’s like she exists to make my wife’s life miserable. She’s arrogant, rude, entitled, nasty. She constantly broke rules and none of her teachers ever liked her. She refused therapy. I’m amazed at the patience and kindness my wife has because the girl was a nightmare. The second Alexa went to college we got married.

She came home for Thanksgiving (probably skipping classes) and came to me this weekend and “confessed her feelings.” Apparently, I treated her so much better than my wife when she was growing up. I tried to be nice to her just because she’s my wife’s sister. I’d do things like take her out once in a while to give my wife/then gf a break. When my wife would try to tutor Alexa and she wouldn’t even do her work and fail half her classes, I told her to let it go.

I lost it and told her I don’t like her, I never liked her, and I was only nice to her because it would make my wife happy. I told her I only put up with her spoiled self to be with my wife and I was annoyed whenever she intruded. Alexa started sobbing and ran out. I told my wife everything and she said I was right to turn her down but didn’t have to be so harsh. She thanked me for being honest. Her parents are furious. I’ve gotten a bunch of weird text messages from what I suspect are alexa’s friends. AITA?

One reader said he’s NTA and that he shouldn’t be alone with her again. 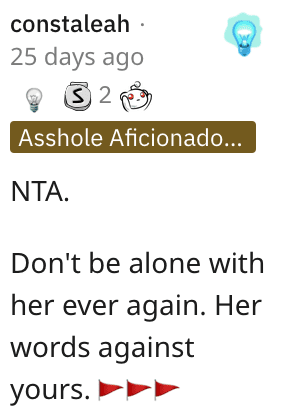 Another Reddit user said he’s NTA and he did the right thing by telling his wife. 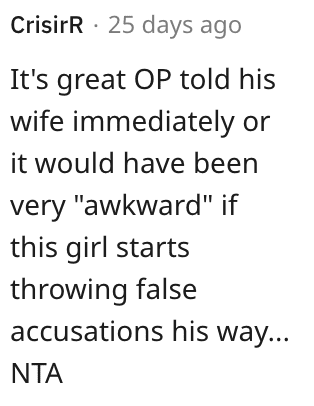 And this individual also said he’s NTA and they theorized about what’s really going on here. 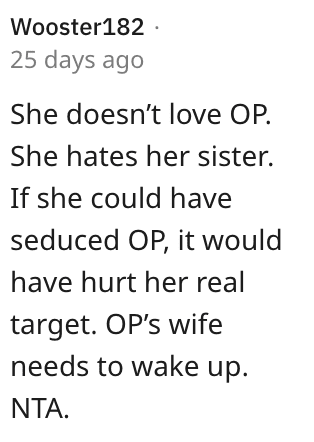