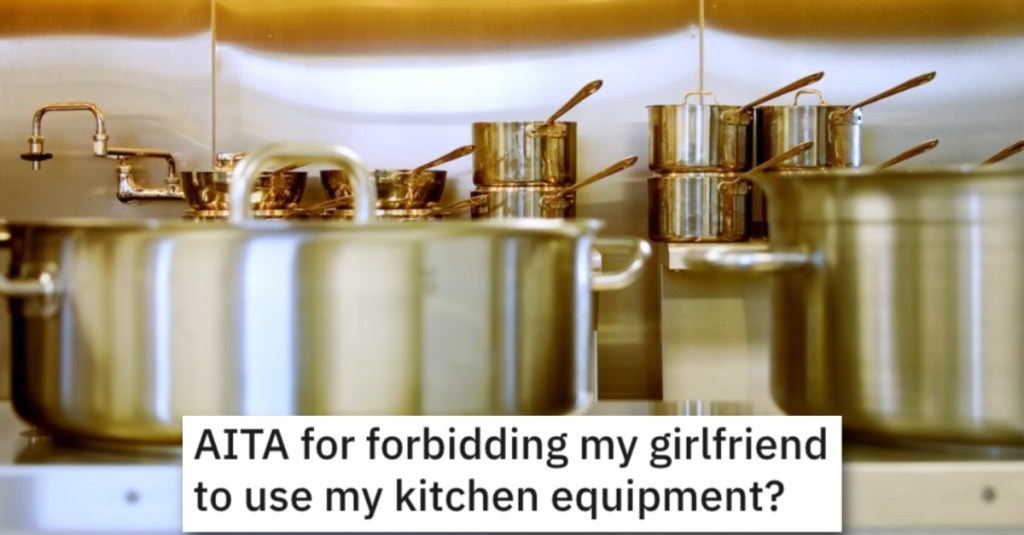 He Won’t Let His Girlfriend Use His Kitchen Equipment. Is He a Jerk?

I’ve met a few culinary professionals in my life who definitely don’t like people touching their equipment.

And that makes a lot of sense to me!

But what about when it’s your own girlfriend who wants to use your stuff?

Check out this guy’s story and see if you think he’s acting like an a**hole.

AITA for forbidding my girlfriend to use my kitchen equipment?

“The problem started when my girlfriend moved in about two years ago.

I’m a former professional chef with a great passion for food. Over the years, I’ve gotten myself a lot of kitchen equipment that’s quite expensive (if it breaks I won’t be able to replace it for at least a couple of months) that I take care of as if it’s my little babies. I have knives, pot and pans that I’ve kept in pristine condition despite using some of them a lot for 10 years or more.

I also have a bunch of cheap, low quality equipment in my kitchen that I call my s**t pans. When she moved in she asked me about them and why I didn’t throw them out and I jokingly told her that I keep them in case I have people that I don’t trust in my kitchen.

Some time after she moved in with me, I started noticing scratches in non stick pans, dents on knife edges and deformations in pots. I started observing my girlfriend when she was cooking and saw her cutting stuff with one of my japanese chef knives directly on top of the stainless steel counter and told her right away to use a cutting board.

I’ve seen that when she’s done with a pan, she puts in under running water to cool it down. She uses dishwashing soap in my cast iron pans and the list goes on. I’ve told her multiple times how to take care of the equipment and what/what not to do, and pretty much every time I correct her she gets annoyed.

So last week I came home and to my horror I saw my 5 liter cast iron pot filled up with water that had dishwasher soap in it. It’s one of my favorite pots that I’ve seasoned over the course of 15 years. I snapped and told my girlfriend that she’s not allowed to use my expensive equipment anymore and showed her the “s**t pans” and told her that those are the ones she’s gonna have to use in the future.

She thought I overreacted but I refused to budge. I’m getting tired of resharpening knives every other day and having to throw out pans that I’ve inherited from generations back because they got deformed or rusted beyond restoration.

She reminded me of how I said the “s**t pans” was for people I don’t trust and questioned whether I trust her or not, which I do, just not with my kitchen equipment.

So please enlighten me, am I the a**hole for banning my girlfriend from using my kitchen equipment?”

One person said he’s NTA and this is a KITCHEN NIGHTMARE. 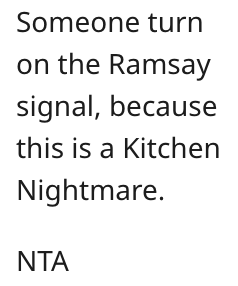 Another reader also said he’s NTA and that his GF isn’t treating his things with respect. 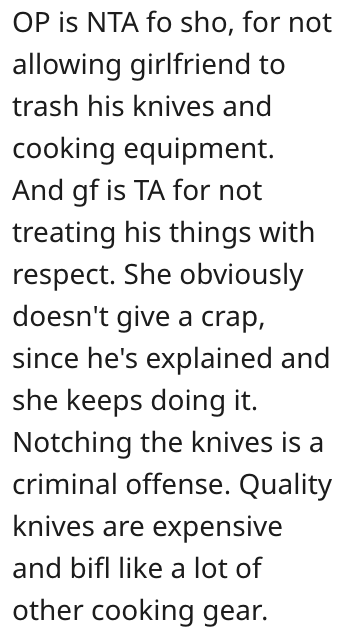 And this individual said he’s NTA and said she doesn’t touch her husband’s cooking gear. 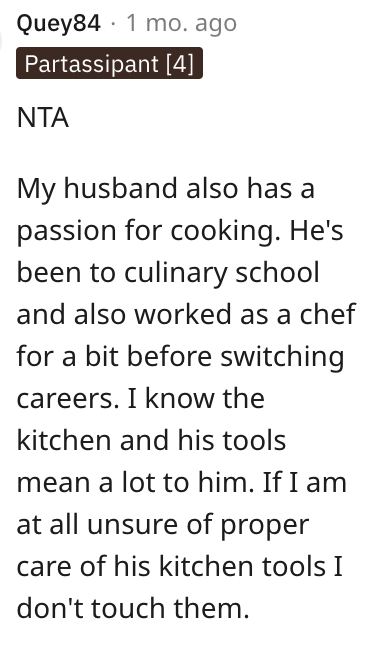