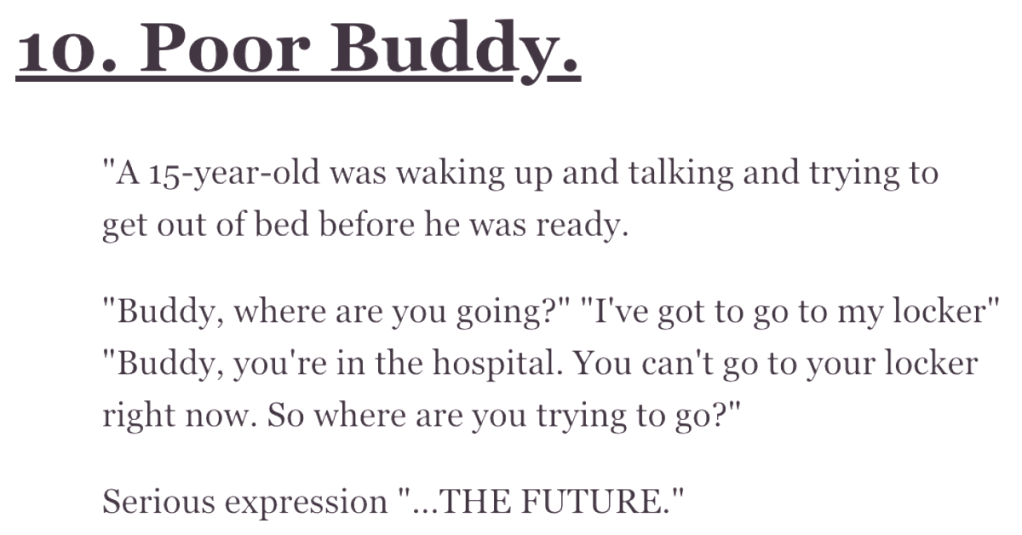 I recently had an outpatient surgical procedure where I had to undergo anesthesia and let me tell you, that stuff makes you feel WEIRD.

I woke up and had absolutely no idea where I was or what the hell I was doing in that room.

Luckily, I didn’t say anything stupid or embarrassing…

But health care professionals definitely do hear a lot of funny stuff from folks coming out of anesthesia.

“Female patient after C-section asking me how many chickens she had, because she had beef with pig.

Her husband translated later: how much the baby weighed, because I have a bet with hubby.”

“We had to slide board a patient from the stretcher to his bed after an endoscopy.

You put a board between bed and stretcher and. Then grab patient and slide them over to bed with sheet underneath them.

My patient screamed “WEEEE!” And then proceeded to tell us that these are the best drugs ever and that it felt like the 1960s again.”

“Guy wakes up in the recovery room after left knee replacement surgery and starts talking with his wife, “Well, at least I still have two good knees.” “Oh honey,” she replied, “you just had knee surg..”

He interrupts in a loud voice, “MY RIGHT KNEE AND MY WEENIE!””

“Did a short stint in recovery as part of my graduate program.

I got proposed to a couple of times.

Same guy would walk past me in the corridor a day later and not recognize me!”

“I am a nurse, but my favorite coming out of anesthesia story was my husband’s.

I went back to see him in recovery and he was super eager to leave and was trying to remember where he parked and I said,

“You DROVE US HERE? Oh my god- you drove us here? Thank youuuu.”

He was close to tears at this point. I took him to lunch after and he nodded off while staring intently at a novelty salt shaker.

My favorite while I was working was a man who woke up from a double great toe amputation and was super worked up about how he was going to wear flip flops until I suggested he try out slides instead.”

“My twin sister started speaking fluent Spanish to my mom after she woke up from getting her wisdom teeth removed.

We’re half Puerto Rican (on our mom’s side), so we’ve grown up hearing Spanish, but neither of us had ever carried a fluent conversation with her in it.

But apparently my doped up sister could!”

“I’m a nurse and I take care of kids.

I have red hair.”

“Middle aged woman with obvious surgical enhancements coming off of anesthesia from a diagnostic procedure.

I was listening to her lungs with my stethoscope and told her “alright, nice big breaths”.

She said “thanks i just got them done”. It was so hard to compose myself haha now I say “deep breaths”.”

“All the level 1 (general anesthesia) patients were snoozing and in no pain, I was walking by and sneezed. I was almost to the door and heard a subdued voice say, “bless you..” Never did figure out which patient said it but it was so sweet.

Another time it was a coworker who’d had surgery, and when I went to check on them, they wailed, “I just want everyone to liiiiike meeeee..”

It was funny as hell because it was a doc who used to yell a lot.”

“A 15-year-old was waking up and talking and trying to get out of bed before he was ready.

“Buddy, where are you going?” “I’ve got to go to my locker” “Buddy, you’re in the hospital. You can’t go to your locker right now. So where are you trying to go?”

“When my brother got home after his wisdom teeth he was on the couch in the tv room laughing and when we asked what he was laughing he said that “this was the funniest show ever”.

“It wasn’t something he said, but I had a patient in his 50’s attempt to motorboat his wife when she came to pick him up.

She was mortified, and I managed to keep a straight face while giving her all his post-op instructions.”

“Funniest was a guy quickly sat straight up after extubation.

We’re all standing around him making sure he doesn’t try to jump off the table. He looks at me and then slowly gives me double finger guns. Turns is head to another staff member and slowly gives them finger guns. Didn’t say a word, just finger guns.

A lot of people wake up really crazy; they start swinging or just get really restless on a narrow OR bed. It’s nice when people wake up sleepy and I’ll just bundle em up with blankies and roll out.”

Have you ever had anesthesia?

If so, did you say anything funny while coming out of it?

Or maybe you’re a nurse or a doctor and you’ve heard folks say some pretty hilarious stuff?

If you have any funny stories, please share them with us in the comments! Thanks!