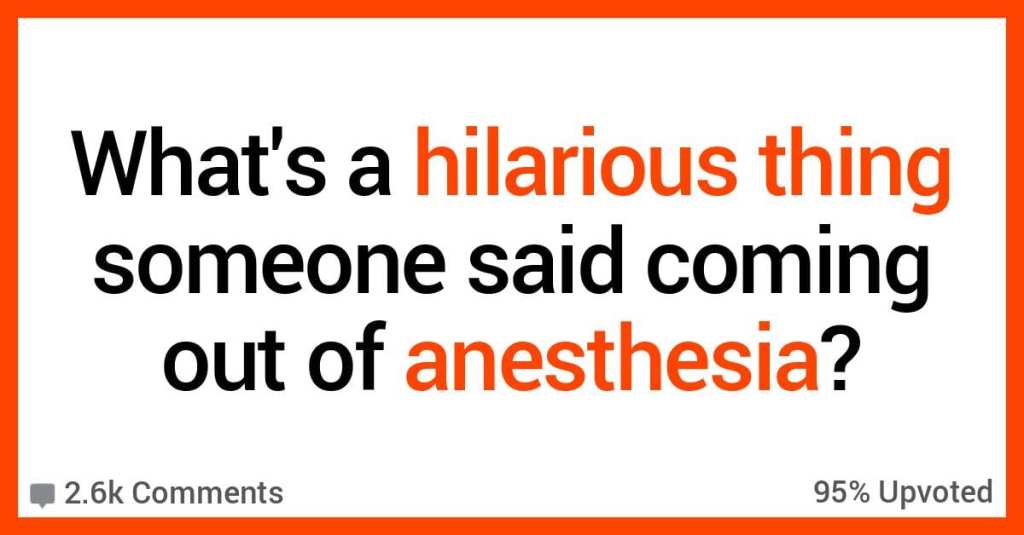 Among the many things that nurses, doctors, and surgeons see on a daily basis is how the effects of anesthesia affect different people.

Some folks probably have no strange reactions at all, while others say all kinds of weird and embarrassing stuff when they’re waking up.

It’s all a crapshoot, but you know that medical folks have some pretty good stories about this.

Let’s check out these stories from folks on AskReddit about funny things that patients said when they came out of anesthesia.

“As a student nurse, I had a patient who had a water infection and in the elderly, this can cause temporary confusion. I came to bring her a glass of water and she looked really upset.

‘Dorris, what’s the matter?’ i asked her (not her real name).

Her son is like, forty. I tried to calm her down.

‘THE ARABS HAVE HIM!’

I just kinda stare at her.

‘We must speak with the prime minister urgently to pay their ransom!’

I had to duck out on the pretext of calling the prime minister so I could laugh.”

“I am a nurse, but this is a personal story.

I went with a friend for her egg retrieval procedure and I was allowed to go in the room to watch the minor surgery. When they finished they woke her up and walked her back to another room to recover.

On the walk back, still super out of it, she kept telling me to get her clothes and the car and we were leaving. After resting in recovery she continued to argue she was ready to leave when she was swaying and unable to stand on her own yet.

She was pretty upset when I kept telling her we weren’t leaving yet, and later had zero memory of any of this.”

“I was assisting a male patient urinate after his hip surgery. He was having technical difficulties related to the size of the appendage and required some help holding the urinal while he did the aiming.

During this already personal encounter, he looks me dead in the eye and says ‘Sorry, Im a grower, not a show-er. Just ask my wife’.

I mentioned it to his wife in the morning, and she was incredibly mortified, but we all had a good laugh. He didn’t even remember saying it.”

“Was a student nurse for two semesters.

On a placement in a post op ward, an old guy had a reaction to the aesthetic, thought he was back in the Korean war, kept trying to get out of bed to help his mates, the two nurses couldn’t figure out how to stop him, they called security.

Meanwhile, I walked up & in my most officious sounding voice said to the nurse I was partnered with “stand down Lieutenant, I’ll take over from here” she looked confused but moved aside I said to him “soldier, you took some shrapnel, you need to rest & recover, now stand down or I’ll have you court-martialed for insubordination, understood!”

He looked at me for a second, looked around replied nice & loud “yes ma’am” and went back to bed.”

“I am a nurse, but the patient for this story is my son.

He was 3 at the time. When children come off anesthesia, there is no telling how they will react. Some yell and scream, some cry, some just look around, etc. Well, my son was coming down after surgery and the kid next to him who was maybe 7-8 years old was also coming down.

My son would whine if I wasn’t holding him so here we are sitting in this rocking chair and I’m just rocking him to keep him calm. Every 5-10 seconds, the older kid next to him would scream at the top of his lungs which would startle my son.

After about the 3rd or 4th time, my son opened his eyes, rolled his eyes, Demi sat up, and yelled “shut up!” in the most long, drawn out manner ever, then laid back down in my arms and closed his eyes.

The kid was giving my son the most serious death glare I have ever seen. The nurses and I all cracked up laughing. It was the first time I had ever heard him say “shut up” to anyone but being the youngest of 5, I’m not surprised lol.”

Maybe I should write a book. I’ve had people terminate pregnancies and beg me not to tell their husband, been punched, heard many secrets.

Young men wake up either in love or wanting a fight. Nearly everyone can’t believe their procedure is over.”

“We had a patient who woke up and immediately confessed she was having an affair with some guy.

The anesthetic nurse though was actually married to a guy of the same name, unusual name, let’s say Tobias. So she was trying to shake the patient awake, going, Tobias who? Tobias who?

“I saw this patient( 40’s male) both going into and coming out of surgery.

Very polite and soft spoken. He was babbling the minute he woke up, but the first sentence that made sense was “mom!!! Nice to see you! I love you. I’m so glad I got your sweet *ss and not dads. The ladies LOVE me for it!”

He screamed this, the room we were in had nine other patients, they were only separated by curtains. And his mom was just outside waiting to see him. She looked mortified.”

“I had a young guy posing for selfies for his tinder still high AF.

He had bloody gauze packing in his mouth and everything.”

“Had a patient wake up sobbing. Like proper ugly crying. He just kept repeating “I’m sorry, I’m so sorry” over and over.

He then had a little sleep and woke up again not remembering a thing.

I like to think of those moments as eavesdropping on what would normally be that person’s private dreams.”

“My brother got his wisdom teeth out and when he woke up he gestured frantically for a pen and paper.

The nurse gave it to him and he wrote “thanks for the pen”.”

“I’m an anesthesia assistant in a hospital.

The funniest thing I saw was a patient who woke up screaming at us and he almost hit me in my face when he swung his arms.

When we asked him whats wrong he replied: “I just had the best dream of my life and y’all woke me up.”

Had this young man come in for an upper endoscopy, and after I pushed the propofol to get him off to sleep this dude sits straight up and starts singing the most incredible gospel music until the propofol finally won (propofol always wins).

After he woke up, I was like “bro, you can sing!” Come to find out he’s a professional singer, had toured with some very famous people, and was about to try out for either American Idol or the Voice.

Probably my favorite patient ever, super nice and talented guy.”

Have you ever witnessed someone say something funny coming out of anesthesia?

Or maybe YOU were the person who did it?