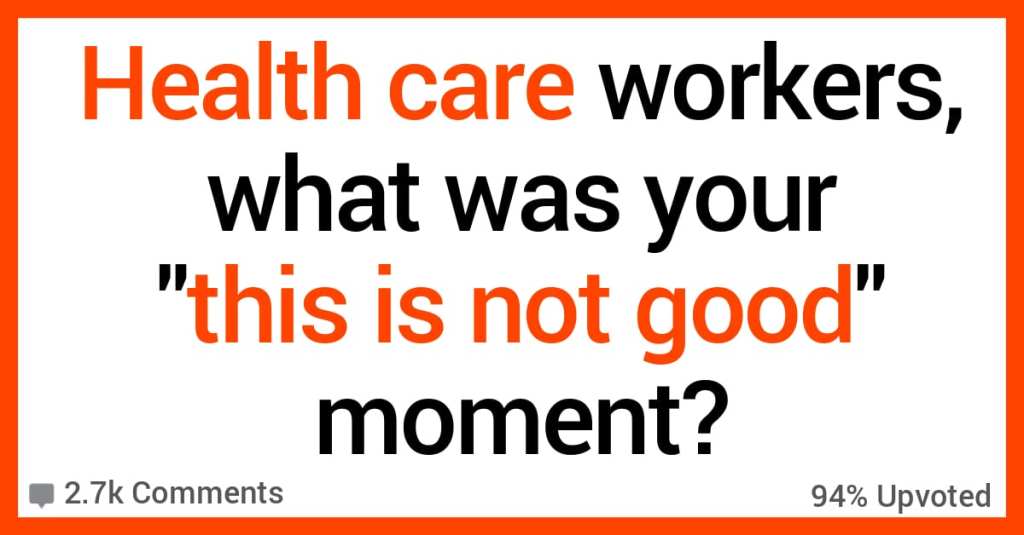 You gotta give it up to health care workers. And if you didn’t before, you REALLY have to tip your hat to them these days.

The last six months have been a nightmare for the whole country and these folks are on the front lines every single day helping save lives.

But even they run into situations sometimes where they say, “uh oh…that’s not good.” And you can only imagine how scary those incidents must be.

Let’s hear from health care workers on AskReddit about moments that made them say, “uh oh…”.

“A kid fell on a broken coffee mug and had a tiny cut just below the sternum.

I was just to clean it and close it up with some stitches, but when I was exploring it I found there damage inside was much more extensive.

The heart was visible beating away and there was also a hole in the diaphragm, and 2 cuts to the bowel.”

“I was assisting on an emergency airway cut into the neck when all other attempts at getting an airway have failed.

Surgeon hit an artery, blood painted the walls for a hot second, until he was able to get in there and clamp something.

“I was a med student and watching a neurosurgical surgery. To open the head they cut out a hand-sized piece of bone which they can put back on after surgery.

THEY DROPPED THE BONE! The patient got an artificial bone replacement instead, thus didnt end up having a boneless area.

But was still a shock for me at the moment…”

I patient once came by the ambulance, as she too obese to move, complaining from bad taste in her mouth. Me and the surgery resident at the ER went to check here and she started giving us info.

She then told us she sometimes feel pain in her belly, so we uncovered here to see what is going on, and OH. MY. GOD!

Her whole abdomen, from the public bone to the diaphragm was ALL gangrenous.

The surgeon immediately took her to the OR where we started debridement. The smell was horrible. The med student fainted there. We kept removing dead tissue and bowel even the godd*mn spleen.

It was so radical that when the time came to close abdominal wall muscles there were no muscle left to stitch together, and we had no vacuum at the time to use. So, we had iv solution in sterile packaging so we open few like butterfly wings and stitched it to what is left from the muscle and sheath.

The surgery was completed and the patient was sent to the ICU.

A day later I was rounding that patient and she was doing fine and then started coughing uncontrollably that she tore the stitches and all of here insides came spelling outside the bed. It was horrifying that I fainted.

When they woke me up I knew that she passed away unfortunately.

I was a student back then but it still haunts me to this very day.”

“Operating to fix a large popliteal aneurysm – we incise and get rid of the thrombus and then suddenly there is A LOT OF BLOOD.

Much faster than the suction could go.

I was working with a trauma surgeon and got this big tourniquet out. Wrapped it around his thigh and eventually got control.

Ended up going to ICU and getting transfused a couple of units of blood.”

“Last week, was performing a tracheotomy inside covid ICU. Double apron, one of which is impermeable, tight mask, glasses, hood… Bit uncomfortable, super hot and actually makes vision be a bit worse… Anyways, I’ve done a few by now.

This guy however, super short neck, fat, swollen… Tight space and difficult anatomy. Everything I touched bled. It was chaos. I closed a huge amount of veins, seemed like he had 8 anterior jugulars each side (a vein that we sometimes see during tracheotomy-one each side).

So, one or two days before this I was talking to my father, and he was telling me how he thinks of his dad when he rides his motorcycle, and that makes him feel protected (he was a biker himself, my grandpa).

Well, as I held a pack of gauze compressing the wound and recollecting my thoughts, I caught myself doing the same thing my dad did -wishing his dad was there to guide him (dad is an accomplished surgeon-but my dad is still alive! Lol).

So yeah, that was the most recent one. All ended fine with the procedure, though the patient has bad odds of making it though his disease, unfortunately. We do what we must…”

“A paramedic out here in Australia.

15 years ago I was tasked to sit on standby at an off road motorcycle race, and responded to a patient that had crashed. Arrived on scene, patient says he thinks he has a broken ankle. I thought oh yeah, everyone says that.

Still carefully the boot though, only to get a handful of bright red blood as the boot came away. That was my oh sh*t moment. Got to his socks, perfect cut through the sock, blood pumping out and the end of the tibia poking through.

The tibia had torn the artery going to his foot, the whole time the patient was calm and joking away, filled with morphine and earned himself a trip in the medivac helicopter.”

We are required to perform a 2-year rotation in all surgical fields before we choose a specific field to pursue as our career. This event happened when I was performing my cardiovascular surgery rotation.

A middle aged female who already had a mitral valve replacement came in for a reoperation. After cutting open the sternum, the cardiovascular surgeon was dissecting the aorta from the ribcage.

Reoperations in any body part is more difficult because of adhesions (your body tissues become more sticky to adjacent structures). Suddenly, blood just GUSHED out like a fountain when the aorta was damaged.

Cardiopulmonary bypass from the peripheral arteries and veins was established in response. However that only maintains the blood perfusion to everywhere in the body except the brain. After fixing the transection of the aorta, then we were able to reperfuse the brain, which took about 15-20 minutes.

“I worked at an ASC for years and it’s unreal how many patients come in with full stomachs.

I think they need to be made aware of the horrors of eating before surgery. Whenever I’m going under I fast for 12 hours at the least to make sure every single thing has processed and left me.

I’m terrified of these anesthesia scenarios.”

“I got called into a room to ensure the laparoscopic camera was working and able to record. This was a 6 hour cardiac procedure and was nearing the end so i knew i was about to see something good.

The surgeon pulls out some kind of growth from inside this guy’s heart.

This thing was the size of a chicken wing. It was growing through his valve and I’m honestly amazed they were alive. Supposedly the only symptoms were shortness of breath.”

“Not me but my uncle. He’s a respirologist and was supervising/sitting in on lung surgery to remove a tumor.

Turns out the tumor was a rootball – some type of seed had gotten into the patient’s lungs and started to grow.”

“Former medical student here. Rotating through General Surgery was mainly an enjoyable time. I remember one young patient, 22 years old, was re-visiting the ER, where he’d been seen 6 weeks prior for sustaining some abrasions and bruises after falling hard off a skateboard. He was all scraped up everywhere but had healed up OK.

But now he’s in the ER again, feeling awful sick, vomiting and with a fever. As the 3rd year med student I was dispatched to the bedside and hung up the CT films on the lightbox, to much finger pointing and grunting among the surgeons.

I had no idea how to read a CT at the time – wasn’t even really sure what part of the body had been scanned. So when the surgical resident barked “prep him for surgery” I was nonplussed, decided to disguise my ignorance and just go for it, as was the approved way for students at this busy public hospital way back when.

We got him gassed and prepped and I scrubbed in. Surgeon said “Open” and I raised the #15 blade. He’d been prepped for a midline laparotomy but I guess I exposed my ignorance when I spoke up to confirm same – this was decades before timeouts, before “wrong site” became a “never event” – because everyone laughed.

I opened and it went uneventfully, reflected the omentum with its lovely arcades and exposed the viscera. “You remember how to perform the Kocher maneuver?” the attending barked. “Yes sir.” “Well do it!”

I slid my gloved hand up into the splenic flexure, getting well ready to grab the entire sack of intestines and move it up and over – the opening salvo of the Kocher maneuver – but met unexpected resistance.

I peered up, seeing in my confusion that everyone was edging away from the table. “What’s the trouble young man, get your hand up there and complete the maneuver! Push harder!”

A spongy sort of barrier gave way and with a sickening stench, immediately recognizable as the locker-room aroma of Staphylococcus aureus, a gushing cascade of 2 liters of grey-brown, bloody pus roared out of the incision, soaking my gown, scrub pants and shoes before splattering on the OR floor and walls.

The splenic abscess, doubtless caused by the transient bacteremia from his skateboard accident, had been lysed, ruptured, evacuated and mostly cured. The attending finished up with the splenectomy and after some abdominal lavage the patient was good as new.

I had to throw out my shoes.”

Do you work in health care?

If so, share some of your most hair-raising stories with us.

Tell us your stories in the comments, please!