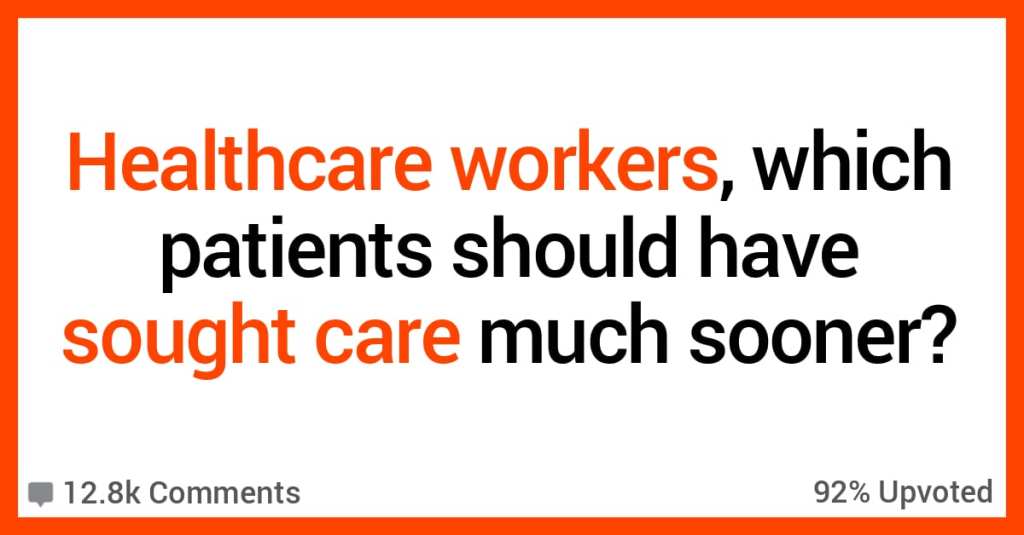 One of my good friends from growing up is an emergency room doctor and he has told me some pretty wild stories over the years about patients who should have come to the ER wayyyyyy sooner than they did for a variety of reasons.

Oh, the things he has seen…

And he’s not alone! All doctors, nurses, medics, etc., have crazy tales of patients who didn’t come into the hospital when they should have…and they’ll probably make you shake your head.

Let’s check out some interesting stories from healthcare workers on AskReddit.

“Had a patient brought in by her son who “took care of her,” when she arrived to our unit I performed a skin assessment…took off her socks and found a fallen off gangrenous toe.

Seems fake and I wish this was but it was by far the nastiest thing I’ve witnessed. Son said he had no idea when his mother’s foot became “that bad.”

“Elderly woman fell at home and broke both femurs.

Son thought she just needed to rest so he carried her to her bed. She laid there in her own filth for 3 days before anyone called 911.

The son lives with her, and there’s family next door as well. HOW. WHY?!”

“ER doc here. Just had a recent one that was pretty bad.

Homeless dude who was in a tent fire and waited a week to come in. Thighs, stomach, and pen*s covered in maggots.

I don’t get squeamish about much, but yeesh.”

“My cousin is a Pathologist Assistant and was telling me how about how she had to dissect a testicle that was 11 pounds.

Turns out it was testicular cancer.”

“My number one “why didn’t you come in sooner?!” moment was getting a call from a patient who had broken their forearm two months ago and never followed up.

If they had just come in, it wouldn’t have been an issue at all. Blows my mind that they went almost three months without care.”

“I was working as a surgical junior when my team was called down to A&E to see a patient who had come in with a complication from a recent hernia operation.

When we came down, we saw that the patient was holding a plastic bag over their abdomen. When this was removed, we found that their wound had opened and their intestine was visible to the air.

It transpired that this was not something that had happened over night, it had taken several days. The patient had started using plastic bags and newspaper to dress the wound when they ran out of dressings.”

“Worked as a doctor’s office assistant.

A regular patient, who was very sweet but unfortunately had an ongoing battle with alcoholism, was brought in by his roommate and I knew instantly that he would be dead soon. I’d seen some jaundiced humans in my time there but this man was a yellow I never knew was possible.

His roommate said, through tears, “I’ve been telling him to come in for weeks!” and the patient kept telling roommate to relax, that he was fine. Majorly in denial. I helped him to the exam room and when the doctor entered the room, he immediately asked me to go call an ambulance.

A few weeks earlier wouldn’t have helped, but perhaps the end could have been made bit easier for him. He died 7 days later in the hospital.

Sounds like something from a grim sketch show, god bless anyone who can do jobs like that.”

“Story from my SIL who is a nurse.

Young man was brought in to the ER. He had a sinus infection that he had let go to the point that it had eaten through the skull and into this brain. She was told that it had started several months before. He didn’t want to go to the doctor for it.

All it would have needed was 10 days of antibiotic pills. Instead, he was not brought in until he was unconscious, and died within a few hours.”

“A farmer in his 70s reluctantly came in with his wife after falling over outside while wrangling a sheep one WEEK earlier.

He did not want to be there but had been “forced” to come by his wife who was worried about him. On questioning/examining he was pale, short of breath, and clearly in pain all over the right side of his chest but not wanting to show it!

X-ray and bloods showed he’d broken loads of ribs, punctured his lung and bled profusely into his chest and was now very anaemic!”

“I had a patient come in saying he couldn’t see. How long had it been going on? For five days.

The man had been blind for five days and didn’t come in because he thought it might be “like a cold Or something”. During the exam when I asked him to move his legs he said “oh, I can’t do that”… (??) I asked how long he’d been unable to move his legs or walk?

Wife chimes in- about two years. Never saw a doctor about it- They just borrowed a friends wheelchair and kept it rolling. Turned out he’d had multiple strokes with multiple risk factors he never addressed.

Given how little insight he appeared to have into the condition I honestly felt sorry- he didn’t have insurance so I’m sure that played a role In Him avoiding seeing anyone.”

“During the pandemic, a guy with a history of heart issues had a heart attack, with classical chest pain. Then he had symptoms of heart failure, which he recognized, because it had happened to him before.

But he still waited a few days because he was worried about coming to the hospital during the pandemic. Finally it got so bad (he couldn’t breathe from the fluid backed up into his lungs) that he came to the ER, when he was obviously hospitalized.

My professor also said he recently had a patient with an aortic aneurysm who was misdiagnosed because she only had a telehealth visit (no imaging) due to the pandemic. She ended up with an aortic dissection. (Edit: She was first seen at an Outside Hospital, but went to our institution for a second opinion. She did all the right things. Outside Hospital made the error to not do imaging.)

The covid19 pandemic is hurting people who get sick, but also all the people not getting the treatment they need because they are avoiding hospitals.”

I work in a very rural hospital, and we have a patient population that seems to avoid the hospital at all costs. I have had so many, usually related to diabetics with foot sores- almost always resulting in amputation of a toe (or more).

However, my favorite was an elderly farmer who came in with chest pain that, ‘Wouldn’t go away’, as he put it. When we asked him if he had it before had it before- he had said that he had been having chest pain on and off for years, but it would typically go away after he grabbed his electric fence.

Apparently, the first time he had the pain- he was standing out near an electric fence on his farm, and he reached out to steady himself and accidentally grabbed the electric fence, which shocked him, and made the pain go away. So after that, whenever he would have the pain, he just went and grabbed the fence and it made him feel better.

He had literally been cardioverting himself for years.

He was fixed up and sent on his way- but we all still chuckle about it now and then because he was so nonchalant about it.”

In the comments, tell us about a time you or someone you know probably should have gone to the hospital wayyyy earlier.