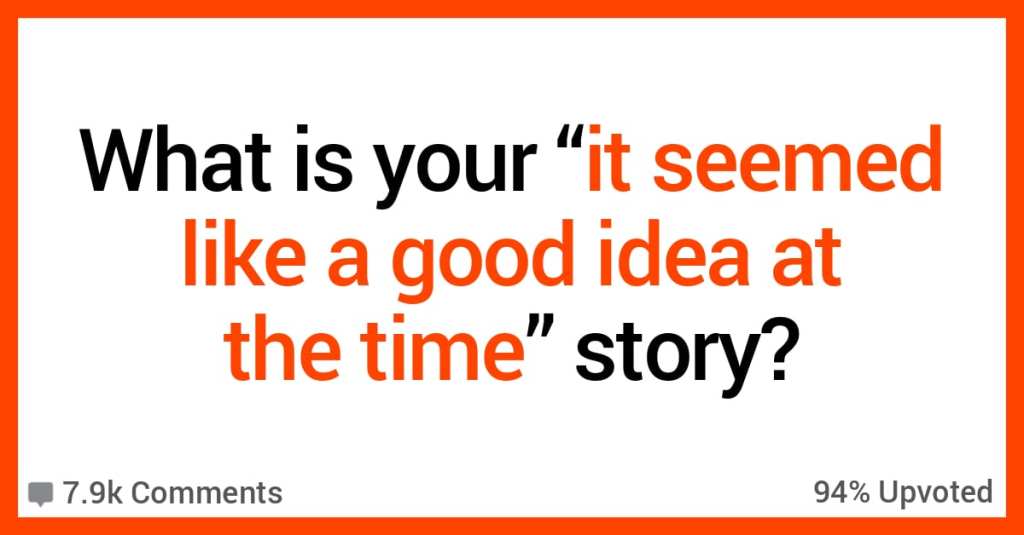 Hey, it seemed like a good idea at the time!

How many times have you heard that in your life? And you know what always comes next in those kinds of stories: you end up doing something really dangerous, stupid, or reckless and things do not go as planned.

Check out these stories from people who definitely said that on AskReddit.

“Applying for a PhD position.

Sh*tty pay and no free time in sight for the next 3 years.

Thanks to it I despise working in science like never before…”

“I had just finished this bike ride with my scout troop and we ended it at the side of a river.

So waiting for our parents to pick us up, the boys all go to a rope swing to f*ck around in the river. It was absurdly shallow, the furthest swing would still land you in 3 foot water, average lazy swing was 2 feet deep or so.

Mom comes, some dad hollars at me that she’s arrived. I run back until I can see her getting out of the car and yell “one more swing mom I’ll be right back”. She seems in a good mood, says okay, starts chatting with other adults there.

So not 2 minutes later I walk up to her with a broken arm. I had gone back for that one more swing, screwed up and planted my wrist into the shallow water, broke my arm, and got out of the water saying bye without telling the kids what I’d done. Just sorta walked up to my mom, “hey I just broke my arm… sorry.”

She was not pleased. like, seriously,.. you HAADDDD to go for one more swing… c’mon lets go get a cast you idiot.”

“In college a large group of us hiked up to this abandoned mine shaft at night, took turns squeezing through a small crack in the mountain (the main entrance was closed off).

Walked down a long dark corridor with our flashlights, then set up a campfire in one of the large clearings at the end and proceeded to get wasted. All fun and games until a rather large girl got too drunk and couldn’t walk on her own.

Getting her out of there was a whole f*cked up ordeal, thought a few times during the process that we were going to have to leave her there in the dark and go get help, especially when my flash light started to die.”

“Summer camp one year, everyone was getting in barrels to roll down this giant hill.

It seemed like tons of fun so I hopped in one and down I went. Well, the whole time it felt like I was being beaten up by the ground, and I was bruised pretty much from head to toe with a few cuts and scrapes too.

Being a young teen I of course had to act tough and like it was awesome, but it really was not awesome. I thought I was maybe just a wimp or did it wrong, but looking back it definitely seems it was a dare type thing everyone wanted to prove they were tough enough for.

I’m guessing many more than just me had the thought of “well, that wasn’t fun”.”

“At a bachelor party last year, we rented a small house in a small town in the middle of nowhere. The 2nd day we are there, we decide to go to a local state park which had a nice swimming hole.

As we were getting ready to get out of the water, one of the locals mentioned a rope swing on the other side of the little island in the middle of the lake.

Always being the adventurous person, I decide to swim out with a few of my friends to check it out. There are a couple of locals there and we watch them go first. It is a pretty high swing off a decent drop and the water looks to get pretty deep, pretty quick.

I take the rope swing, go to one of the highest points I could, and launch off. As the swing hits the lowest point, my hands slip just a bit, but its enough for me to react by dropping my knees just a bit. As this happens, my feet hit the ground.

I coast out into the water on my belly and float for a few seconds before regaining my composure and slowly swimming back into shore. My leg is bleeding and my right hand hurts like hell. We go to a local urgent care.

Long story short I ended up with 12 staples in my left knee to close the gash from the rocks. I had X-rays on my hand after the weekend and found out that I essentially shattered my right middle finger.

I ended up needing surgery and now have 3 screws in that finger. It has most of its functionality, but it does hurt like hell from time to time.

But d*mn if that rope swing didn’t look like a good time.”

6. Benders are not a good idea.

“Going on a 4 day bender with no sleep.

Ended up getting the sh*t kicked out of me and required 7 stitches in the back of my head, spending 2 months wages, losing my brand new £1000 phone and p*ssing off numerous ex girlfriends by declaring my love for them.

Oh and I was hungover for about a week. Haven’t had a drink for 3 months now because of my stupidity!”

“Came out of a party at university and my friend told me to jump into a snow pile headfirst.

Thought it would be really funny until the snowpile turned out to have a layer of solid ice on the top.

Blacked out for a couple seconds and cut my head pretty badly.”

“Decided to get high and go to a yoga class because I thought I would get a better mind muscle connection.

Turns out the class I decided to go to was being taught by a eastern European yoga psychopath and had me bending my body in ways I have never done before.

“My cousin and I were sitting on his balcony on a breezy day, and we decided to spray some of my pepper spray into the air to see what it smelled like.

Oh, how our eyes burned…

There was alcohol involved.”

“Dating my co-worker even though I have been down this path once before.

We lasted for a while before I caught him flirting with a new girl in front of me.

I found out a lot of things after the fact and it nearly destroyed me.”

“Work sent me to the Chicago area and I got out super early one evening and decided to hitch a train to a bar I’ve always wanted to go to.

I carefully planned a trip so I could make it there and back with enough time to see the bar and without driving so I could drink.

I took an hour and a half’s worth of train rides, walked for five minutes, and found that the bar was closed for a private event.

That’s how I spent my night yesterday.”

“Getting really high before a work Christmas lunch at a fancy restaurant.

I was 19 in my defense but d*mn it was awkward trying to talk to people and act normal.

Such a bright restaurant.”

“College dorm mini-party: My roommates and I were all engineers, and we decided to make our own drinking game.

So we got a deck of cards, and we split the cards between the three of us. Then we’d go 1.. 2.. 3! and everybody would slap a card down. The first person to correctly add up the values of all the cards (per blackjack rules) didn’t have to drink, but everybody else had to do a shot. If you shouted the wrong number, you had to drink twice and nobody else did.

Basically, you had to try to do math while getting plastered.

Things escalated pretty quick. The more drunk people got, the worse they got, and the more double-shots they were taking. In engineering terms, it was a positive feedback loop.

The next morning one of my roommates (who was pretty shy, and we didn’t realize was a lightweight) was found in a giant puddle of puke in the bathroom. We got him up, helped him out of his clothes, and got him into the shower and brought him water, etc.

After passing out in the shower for a few hours, we moved him to his bed, where he woke up naked about 10 hours later — having zero memories from the party.

Scary sh*t. Looking back, I realize how serious it could have been for him.”

“I was having trouble paying my rent, so I let my friend move into my bedroom while I slept in the living room. Thought we’d share the rent 50/50.

Turns out, my friend of 15 years was an alcoholic. He never paid his share of rent on time, drank a liter of wine every night (I found bottles he had hidden for months after he moved out) and he was a complete slob. I really didn’t know my friend very well.

He moved out saying “it’s not going to work out”. For about 3 months he texted me to ask for money. I ignored every call/text. Finally, I ran into him at a restaurant.

He was staying at a sober living place and he was trashed off his *ss. We haven’t spoken since.”

In the comments, tell us your “it seemed like a good idea at the time” stories.