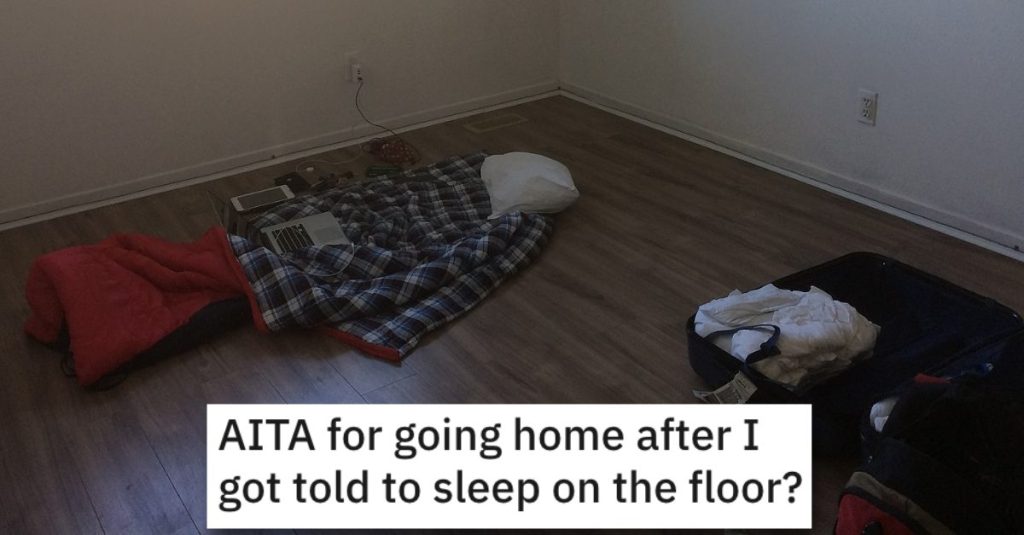 Her Husband Told Her to Sleep on the Floor. Is She Wrong for Being Mad?

Well, this sure is a weird one…

But we want you to make up your own mind about this story from Reddit’s “Am I the A**hole?” page!

Read on and tell us what you think in the comments!

AITA for going home after I got told to sleep on the floor?

“I’ll preface this by saying that my husband (33) has a friend “Carl” (33) who he considers to be one of his closest friends. My husband sometimes calls Carl his “nicotine” because of how much he misses him and wants to spend time with him, they do everything together, they’re even co workers working the same job.

Unfortunately, Carlos’s wife passed away from cancer 3 months ago which caused him to distance himself. My husband felt devastated for him, he recently started spending more time with him and brought him meals and new clothes.

We planned a 3 day vacation to another state. I made a hotel reservation for 2. Unbeknownst to me, my husband had invited Carl to come with us, this made me upset because it spolied the entire vacation (not trying to be dramatic) I only found out when he went to pick him up.

I sucked it up after my husband explained that Carl is a recent widower who’s been wallowing in grief for so long and needed this vacation. The problem is money is tight and since Carl hasn’t worked eversince his wife passed he couldn’t pay for his own room and we didn’t have a budget for it.

My husband said we should just share one room and I again sucked it since he said we’d be out all day on the beach anyway. First night, I was in bed when my husband and Carl got back, I got woken up by my husband telling me to get out of bed and sleep on the mattress he put for me on the floor and he and Carl would take the bed.

I asked if he was serious and he asked what else is he supposed to do, he said Carl was a guest we can’t let him sleep on the floor and at the same time I can’t share a bed with Carl while he (my husband) sleep on the floor. I told him I didn’t sign up for this but he told me to suck it and tried to pull “Carl is a widower” card.

I told Carl to get out then got up and got dressed to go home. My husband started yelling me calling me irrational but I wasn’t having it. I left the hotel and traveled back home. Carl didn’t say anything when he saw me leave except that I was making this non-issue an issue.

They got back and my husband refused to even talk about but still said I ruined this for Carl and us and acted abhorrently and disgustingly. I admit Carl is struggling and I mightve ruined this for him but I didn’t even know he was coming.” 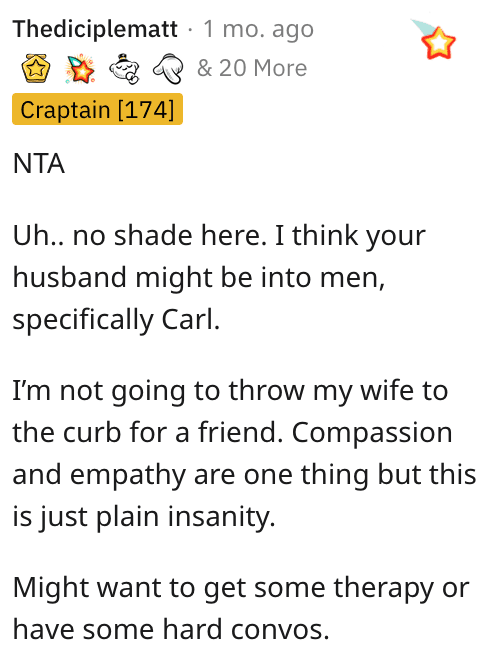 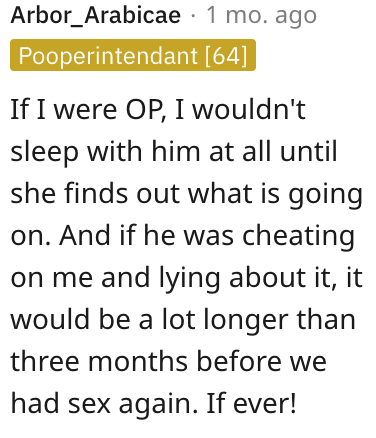 And this individual said she’s NTA and she needs to realize her husband is in love with his friend. Ouch… 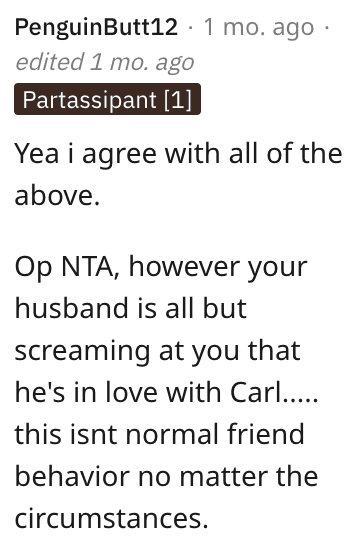