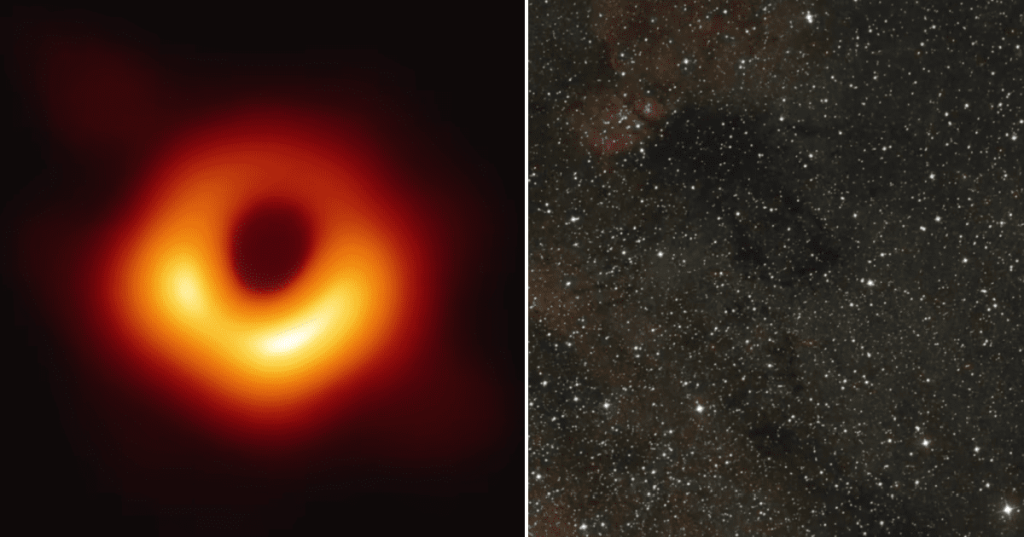 Here’s How Astronomers Captured Images Of A Giant Black Hole

If you think about it, taking pictures of a black hole almost sounds like an oxymoron. It’s complete blackness and it’s a hole, so how can we take pictures?

As usual, though, scientists are about to show us how it’s done with some awe-inspiring images.

Sagittarius A* is a supermassive black hole that sits at the center of the Milky Way, but even though we’ve known about black holes for quite some time, this is only the second image of one ever taken.

Astronomers worked with the Event Horizon Telescope Collaboration to make it happen, and the result was some truly amazing shots.

“This is a picture of the supermassive black hole at the center of our Milky Way galaxy known as Sagittarius A*. The black hole itself doesn’t emit light so what we’re seeing is the hot plasma swirling around it.

This is only the second picture of a black hole ever. It was taken by the Event Horizon Telescope collaboration.”

There are several reasons, including the distance, that taking these images are challenging.

“How did they make these images of black holes? Well, the first thing to know is they weren’t made with visible light. They were made using radio waves with a wavelength of 1.3 millimeters. So all the observations were taken by radio telescopes which essentially look like huge satellite dishes. A radio telescope works by scanning back and forth across the sky.”

Event Horizon Telescope also announced the discovery on May 12, 2022.

“Astronomers have unveiled the first image of the supermassive black hole at the centre of our own Milky Way galaxy. This result provides overwhelming evidence that the object is indeed a black hole and yields valuable clues about the workings of such giants, which are thought to reside at the centre of most galaxies. The image was produced by a global research team called the Event Horizon Telescope Collaboration, using observations from a worldwide network of radio telescopes.”

The discovery is exciting to anyone interested in astronomy, and as you can see, the images are stunning.

A double win in almost any book!