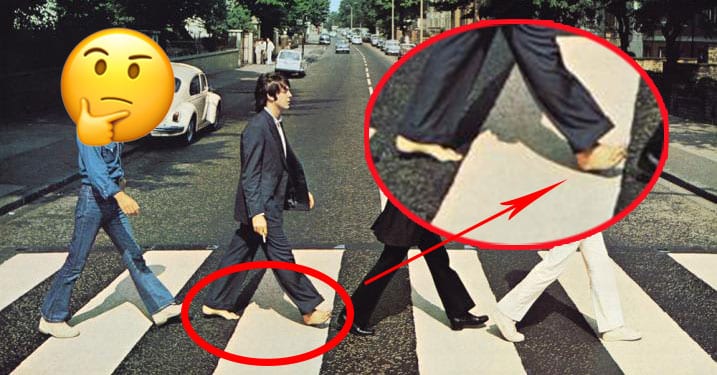 You might have heard of a little 1960s band called The Beatles, yeah?

Probably. But if you’re young, or not a superfan, or not the child of a superfan, then you might not know that the famous Abbey Road album cover is the subject of many conspiracy theories.

For reasons unknown, rumors began to circulate in the late 1960s that Paul McCartney (“the cute one”) had died in a car crash. People believed that the Beatles managers and handlers had decided that telling the public the truth could potentially destroy their cash cow, and so they hired a look-alike instead.

The band, supposedly, wasn’t on board with lying to their fans, so they began to leave clues to the truth in their album artwork.

Basically, fans thought the entire cover of the Abbey Road album was a clue – that the image of the band crossing the road actually depicted a funeral procession.

She's wondering where those boys from 1969 must be walking to. #thebeatles #abbeyroad #1969 #50years #imlate

It was led by John Lennon, dressed in white like a clergyman. Next, Ringo Starr’s black clothes were meant to represent a mourner. George Harrison was dressed casually, in jeans, as the gravedigger.

McCartney is also out of step with the others, whose legs are all in the “V” shape of a mid-stride.

The truth (if you’re not into conspiracy theories), is that it was hot that day on Abbey Road. McCartney had chosen to wear sandals with his suit, and at one point, had kicked them off. No one would have been paying too close attention to wardrobe and the like because Abbey Road is a busy street, and a lot of work was going into trying to get the picture at all.

The photographer had to perch on a stepladder in the middle of the road, and police helped stop traffic as the Fab Four crossed the street, turned around, and crossed again. He got three images each direction – only six in total – so even if they noticed belatedly that Paul was shoeless, they wouldn’t have been able to re-shoot.

A reporter for LIFE magazine asked McCartney (the real one? You decide!) about the pictures and the theories after wading through “a bog in Scotland” to get to the man’s farm, and reported back McCartney’s answer for posterity:

“On Abbey Road we were wearing our ordinary clothes. I was walking barefoot because it was a hot day. Can you spread it around that I am just an ordinary person and want to live in peace?”

The Beatles' "Abbey Road" released in US on this day in 1969. This was their Swan Song, recorded after but released before "Let It Be". #TheBeatles #AbbeyRoad #SwanSong

McCartney is the one who suggested the cover, meant to show the band walking away from the studio where they’d spent most of a decade recording.

Which I’m guessing he ended up regretting, whether it was really him or not.