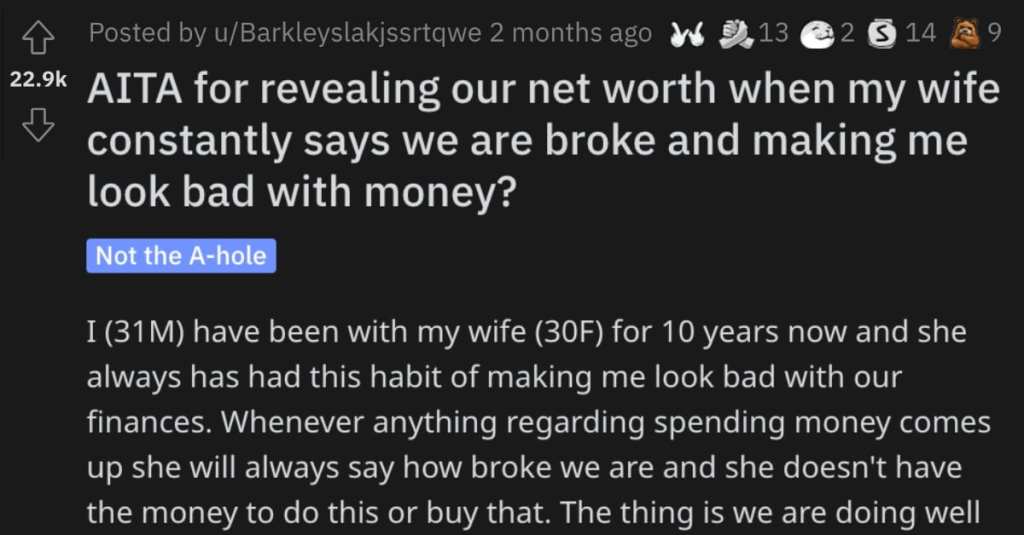 Husband Set the Record Straight Because His Wife Complains About Their Finances. Was He Out of Line?

Well, this certainly a weird story…

I guess every person thinks about their finances differently and some also like to portray a certain image about their money to the outside world.

Check out this story from Reddit’s “Am I The A**hole?” and stick around to see how readers reacted.

AITA for revealing our net worth when my wife constantly says we are broke and making me look bad with money?

“I (31M) have been with my wife (30F) for 10 years now and she always has had this habit of making me look bad with our finances.

Whenever anything regarding spending money comes up she will always say how broke we are and she doesn’t have the money to do this or buy that. The thing is we are doing well financially. We have decent jobs and combine our salary is roughly $125k/yr.

As of today our net worth is more than $1 million but less than 2. I had saved/invested a lot before getting married so I gave us a good head start. I control the finances/take the lead but we both agreed to living a very modest life. We both have our cars from college for example (Honda & Toyota). She knows everything about our finances because at least once a month I go over it with her every time I deposit money in our investment accounts or our kids college funds.

For banking we have an emergency fund and I budget everything else to go straight into investments. We basically stay right at $10k in our banks savings account and $500 in our checking account after bills. EDIT: Most of the time there is more than $500 in our checkings but once I pay our CC each month I then move anything extra. We always use the CC so its not like we only have $500 to spend. Our CC limit is $25,000.

A few months ago we had dinner with her friends and they talked buying a new car. My wife said something like, ‘I wish I could get a new car but I’m always broke after paying the bills. We still have our college cars!’ (EDIT: Wife does not want a new car). She will go on to talk about if she had money what she would want to buy and it always makes me feel ashamed.

This ‘I’m broke story’ has been happening for years. When we were driving home I asked her about. She understood we have the money but its how she feels because her bank account is always low. I said I can increase our budget or keep more money in our bank if she wants. Since we are doing well I’m okay with spending more. She said no and again was happy with our finances. I explained that when she says we are broke it makes me look bad and I feel ashamed. Its as though I can’t provide for the family and/or I am bad with money. She doesn’t see it that way.

The same conversation has come up numerous times about us being broke. Recently, I reminded her numerous tikes it makes me feel and look bad infront of friends and family. I told her if she keeps saying stuff like that I will reveal that we are doing well with money. I gave her a few reminders I’d eventually do this but she kept going with the I’m broke story.

At a dinner with her sister and parents the same I’m broke story came up. I piped in and said, ‘It’s weird to hear a millionaire say they are broke.’ My wife said, ‘Haha, I’m not though.’ And I quickly say, ‘We are millionaires and you know that. We go over our finances every month.’ Well the I’m broke story stopped after that and the night went on as usual. A little later the same thing happens with her friends and I use the same line.

Now my wife is mad at me for using that line and revealing roughly how much money we have. She said it seems like I’m gloating. I say its better than making me look like I’m running us into the ground fincially.

So AITA for revealing our net worth when my wife says we are broke?”

Well, that was interesting…

Let’s see how Reddit users responded to this story.

A person said they think the wife behaving this way without being prompted is pretty strange. 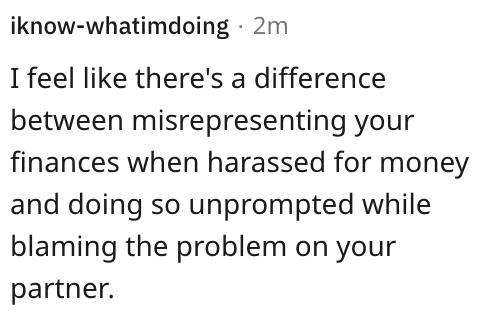 Another reader said they think everyone sucks in this situation. Read on to see what exactly what they think. 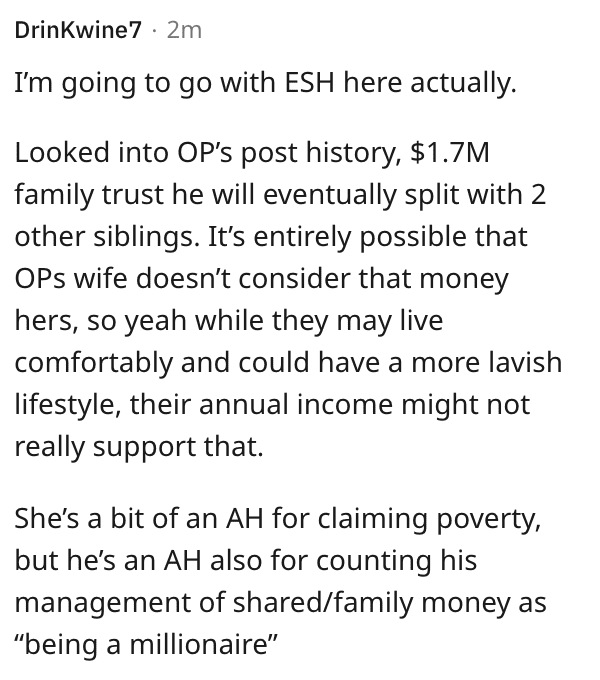 This Reddit user said it’s just odd that someone with this much wealth and assets is complaining about being “broke.” 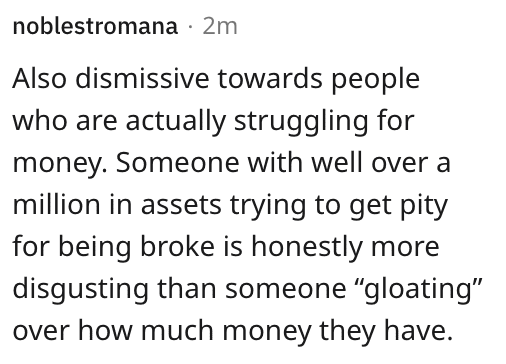 And this person said that it’s a good thing the husband called his wife out on it because it’s offensive to people who are actually struggling with finances. 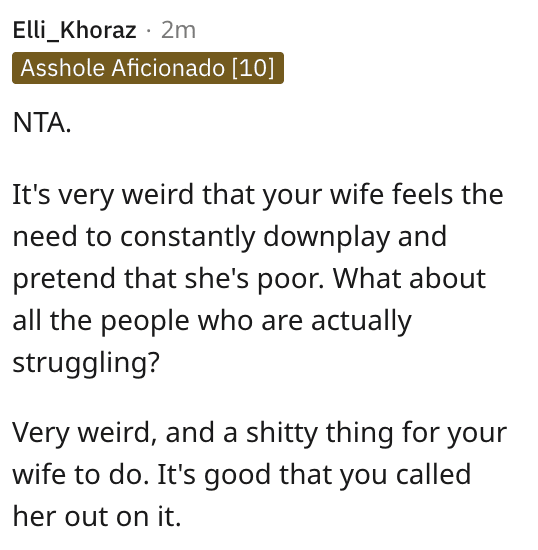