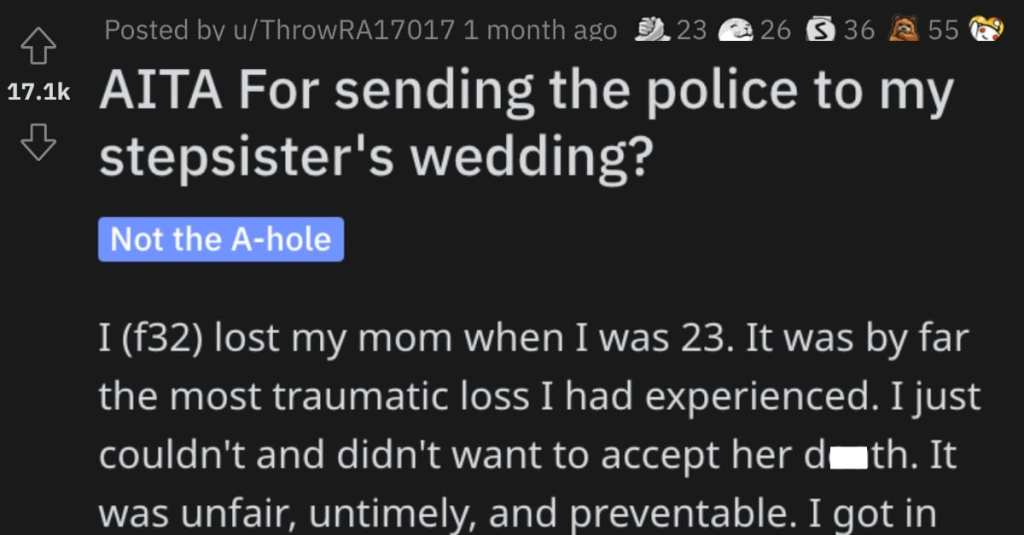 She Sent the Police to Her Stepsister’s Wedding. Was She Wrong?

Okay, I guess the people involved in this story couldn’t really run for it because they were at a wedding…which makes this story so strange.

Read on to see what happened in this entry from the “Am I The A**hole?” page on Reddit.

AITA For sending the police to my stepsister’s wedding?

It was by far the most traumatic loss I had experienced. I just couldn’t and didn’t want to accept her death. It was unfair, untimely, and preventable. I got in therapy and was doing better but I had issues with my dad’s new wife and her daughter who’s 25 and just got married weeks ago.

We do not have a close relationship but we were cordial enough to sit at dinner tables. My stepsister treats me as a relative and was as much distant from me. But after my father got sick we had to see each other a lot. I’m handling his care while stepmom works full time and stepsister doesn’t do much though she’s always visiting when I moved in to help my dad.

Before that I was living with my ex so returing home was just in time. I brought with me all of my mom’s belongings and my stepsister showed interest in my mom’s necklace and asked if she could borrow it to wear it at her wedding. I refused and she tried every method to convince me i had to put it in a place where I thought it’d be safe after my stepmother got involved.

As the wedding approached they both kept convincing me to let my stepsister have it (she bragged about affording a better one but it was a matter of showing who’s in control) I stood my ground and told them how serious I was so they backed off.

I didn’t attend the wedding to stay with my dad. I remember wanting to change where I was hiding the necklace while the house was empty but I found it was gone. After searching for hours, I called my stepmom and she said not to worry my stepsister took it and will return it when the wedding is over but it was clear that I won’t see it til after the honeymoon since she said her daughter was staying at a hotel.

I screamed at her to return it but she argued about not wanting to leave the guests and the wedding already started. I told her I’d get it myself but she forbid me from coming saying she’d have to keep me out for wanting to make a scene. I called the Police and explained to them what was happening. I informed them my stepsister intended to leave for her honeymoon with my property.

The Police were sent to where the wedding was being held and they were able to retrieve the necklace from my stepsister. She and my stepmom were in shock and livid. She (stepmom) returned home and kept shouting at me calling me petty and crazy to send the police to my stepsister’s wedding. ruining it and humiliating them over a piece of jewelry.

She was screaming at my sick dad telling him to handle me after the stunt that I pulled at the wedding. I defended myself saying I only wanted an item that belonged to me THAT THEY TOOK WITHOUT PERMISSION returned. She argued further that I could’ve waited to get it back but I chose to burn the bridge with my stepsister and said that she considers me dead after this. She said stuff I can’t mention here but all I can say is it was a bad night.

I might have overreacted by getting the police involved but I had no gaurantee of getting the necklace back since I have experience with them in the past.

Now let’s check out how Reddit users responded to this story.

This person said that this woman is not the a**hole here and that her step-family most definitely is. 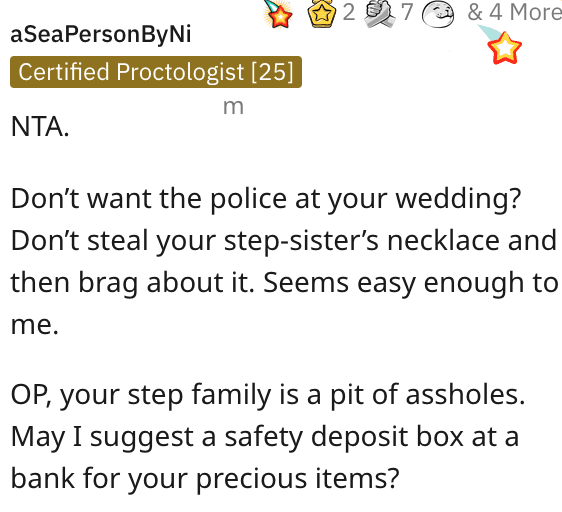 Another Reddit user said that the stepdaughter is acting this way because she most likely learned it from her own mother. 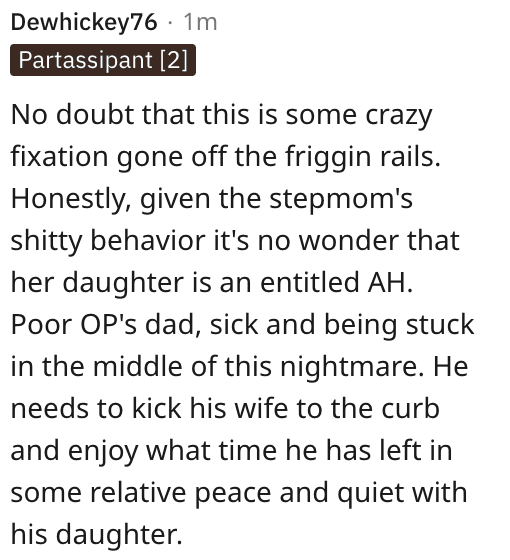 Another individual said that this was indeed the worst kind of humiliation…and that’s some pretty good revenge, don’t you think? 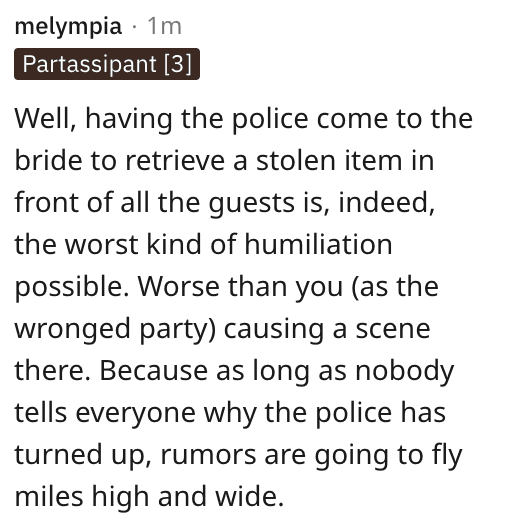 And lastly, this person argued that the stepsister only did this because SHE is the a**hole and wanted to upset the woman who wrote the post. 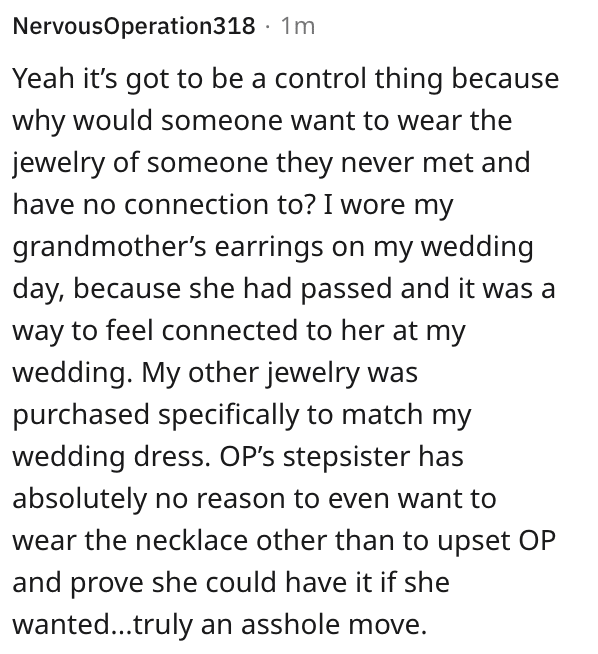