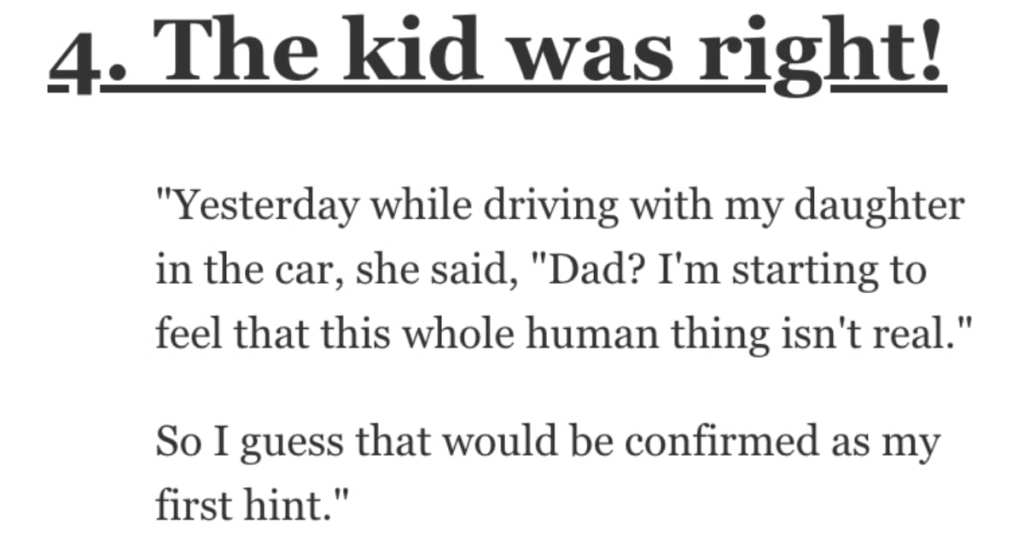 If Life Was Proven to Be a Simulation, What Major Clue Did We Miss? Here’s What People Said.

There’s been a glitch in the matrix!

Have you heard anyone say that if they see or experience something out of the ordinary that they can’t explain?

Perhaps they’re on to something that we haven’t figured out yet…?

What clues did we miss…if life turns out to be one big simulation?

Here’s how people on AskReddit responded.

“Idk if this is just me, but I often have a boring dream of myself in a classroom or on a bus, wake up and forget it pretty quickly.

Then, many years later, I’m on a bus or in a classroom and I see something or hear something that I saw or heard in that dream. Then I suddenly remember that dream and get really confused.

In reality, I probably dreamed about being in a different classroom or on a different bus and my brain took this new but very similar event and overlayed it over the old dream, changing my memory of that dream. It’s happened about 10 times in my life so far.”

“Why physics appears to operate under different rules depending on whether you are looking at very big things or very small things.

If it is a simulation they simply faked the big things to save processing power which is why quantum physics doesn’t fit neatly in our understanding of the universe and likely why we are “detecting” dark matter.”

“When your pen gets lost as soon it hits the floor.

And then appears right there after some time.”

“Yesterday while driving with my daughter in the car, she said, “Dad? I’m starting to feel that this whole human thing isn’t real.”

So I guess that would be confirmed as my first hint.”

Quantum physics as a whole feels like a huge dev shortcut, things only exist in a definitive state when they are interacted with, kind of like a GPU only rendering things when your character is looking at them.”

How it could be a gateway to another universe or version of yourself, and how do we manage to forget most dreams especially the important ones.”

“Deja Reve. It’s similar to Deja vu but it’s where you’ve dreamed of a future moment.

It’s weird and for me it hasn’t been useful. But one moment I’ll be experiencing life and know what’s going to happen, because I saw it in a dream. I’ll even know about my futile attempts to change it from the dream.

It only lasts a couple minutes at most and is at mundane moments but it is freaky.”

“That thing where you go into a room for something and then forget why. Like a Sim who had their action cancelled.

That can’t be for no reason, that was someone in our simulation cancelling our action.”

“The need to sleep.

Gotta reset the system or it slows down, has glitches and deteriorates because it can’t clear out the useless junk and runs out of space.”

“Some get sick for no reason and some who should be sick because of how they live seem super healthy.”

“Millions of years of evolution and we can still accidentally bite our own tongue?

“So, at my first job after college, I run into this guy in the smoking area, and he said, “Hey, how’s it going?”

I knew him right off the bat, but I am absolutely horrible with names, plus I couldn’t quite place him. Did I know him from high school? College? Friend of a friend? Academic conference? Someone I interviewed for the paper? So I talk with him for a few minutes, waiting for the guy to drop some sort of hint to trigger my memory.

Finally he looks me straight in the eye and says, “You don’t remember me, do you?” I was so embarassed, but freely admitted it and asked him to remind me.

He gets this stunned look and said, “Oh, sh*t, really? Because I’ve been waiting for you to say something to remind ME.”

We’ve known each other 22 years, been a couple for 20 years, and been married for 12 years. We STILL don’t know when we met the first time. We have a couple guesses, but don’t know for sure.

The weird part is that we figured out there were multiple times we SHOULD have met, but didn’t. We knew a lot of the same people, but at different times – a guy I went to college with was someone he knew in junior high, his best friend’s girlfriend shared a high school class with me, I was acquaintances with a girl he dated just before he enlisted in the Navy, which was right about the time I moved into the area.

The oddest one was that we should have met as young kids. We should have met when I was in 1st grade and he was in 3rd grade, because we both qualified for an enrichment program that year – but my family was going to move later that year, so my parents kept me out.

So, yeah, we know the second time we met but not the first, and should have met earlier but kept missing.”

Have we missed some big clues that prove this whole life thing is a simulation?