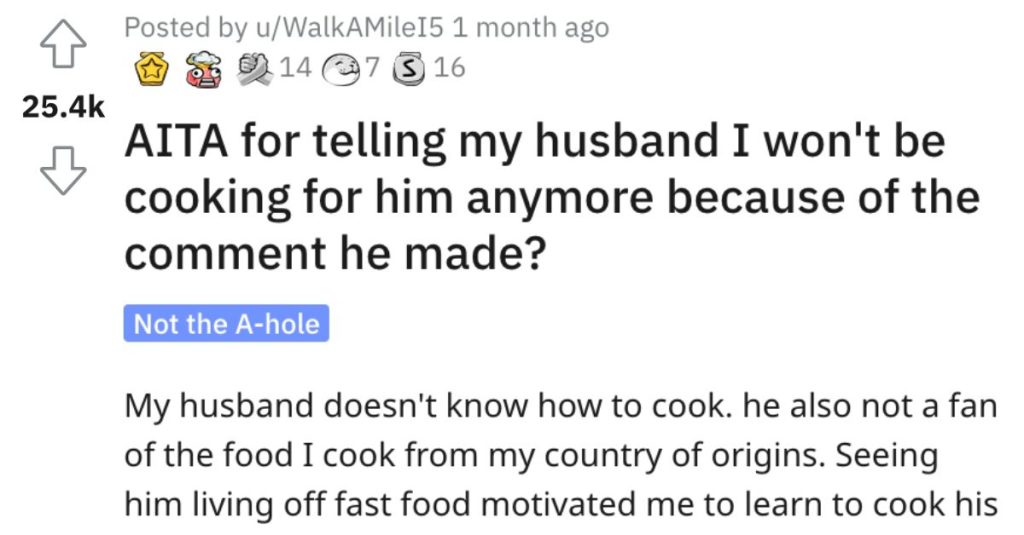 If She Wrong for Refusing to Cook for Her Husband Anymore? People Responded.

If you’re getting fed on a regular basis by someone you’re in a relationship with, I think it’s a pretty wise idea to just keep your mouth shut and enjoy it…

Or else there are gonna be some BIG issues.

Take a look at this story from Reddit’s “Am I the A**hole?” page and see if you think this woman stepped over the line…

AITA for telling my husband I won’t be cooking for him anymore because of the comment he made?

“My husband doesn’t know how to cook.

He’s also not a fan of the food I cook from my country of origin. Seeing him living off fast food motivated me to learn to cook his family’s common meals. It took me a while to get it done properly but now I can cook an entire list of his favorite meals. he praises my cooking and encourages me to learn more.

While we were eating dinner at his parent’s house. I had to excuse myself to go wash my hands after I was done. I left the table and my husband was still eating. as I was making my way back I heard his dad tell him to take it easy because he was eating a lot. he then asked my husband if I cook for him and if he eats well at home.

My husband said that I do cook for him but the food I make can only be fed to pigs not humans. I was hurt and so offended. I showed up infront of him and told him I will no longer be cooking for him after this comment. He was turning in his seat as I walked right past him, took my purse and said I was headed home.

He got back later saying it wasn’t like that and that even if it was then I should be happy he still eats my food when it’s still “not perfect” yet. He said he was trying to protect my feelings and I hurt him when I said I won’t cook anymore.”

This reader had some good tips for how she could tackle this situation. 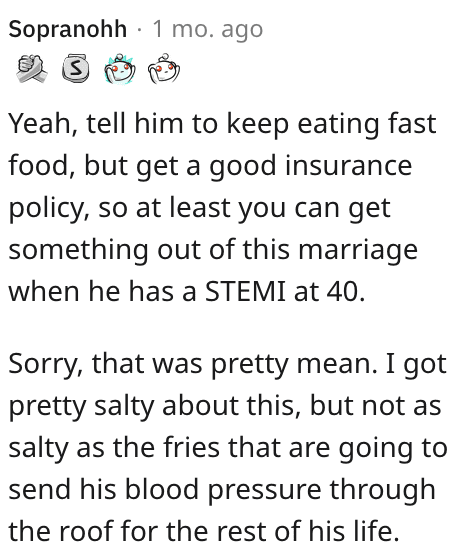 And another Reddit user said he should just cook for himself. 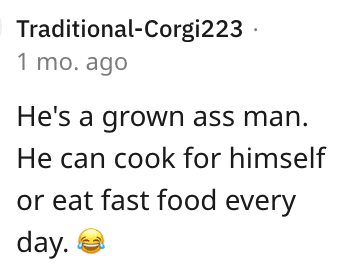 This individual had a similar story and they shared how they dealt with it.

F**k around and find out!

Talk to us in the comments and let us know what you think about what happened.