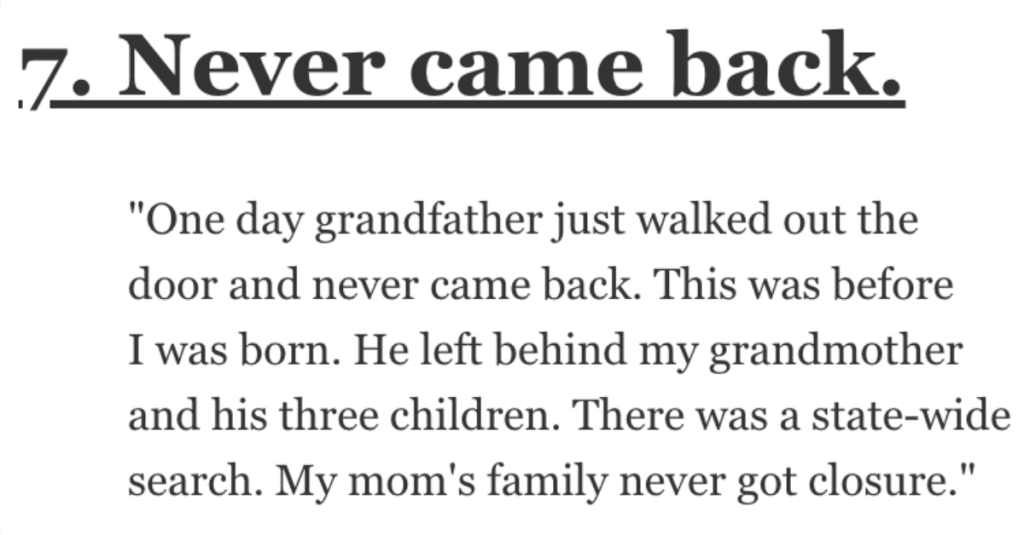 If You Could Learn the Truth of One Mystery, What Would You Choose? Here’s What People Said.

I was flipping channels recently and I happened upon a show on National Geographic about the many conspiracy theories surrounding the JFK assassination.

I have no answers or ideas really, but every single time I come across anything to do with what might have happened in Dallas on that day in 1963, I’m immediately sucked in.

And I know I’m not alone on that one!

People on AskReddit discussed the mysteries they want to know all about. Let’s take a look.

“Some animals can’t see color cause they don’t have the right organs for it.

What are all of the aspects of life we’re missing out on cause we don’t have the organs to perceive them?”

“The truth from when my gran died and the weeks leading up to it. She died on the 6th of December.

She cancelled her life insurance just days before her death Wrapped every single present for the whole family and name tagged them (over 30 family members) when she usually wrapped them on Xmas eve She worked in a small gift shop along with the owner- both of them died within 3 hours of each other.

Has puzzled me for years and hopefully some truth comes out before I pass away.”

LOADS of wealthy people involved and murders attached to it, also.”

4. Monsters of the deep.

“What deep sea creatures exist that we haven’t found yet?

Just how big is the largest squid out there?”

“I gotta go with the first ever unsolved mystery that really made me think. Mystery of the Somerton Man.

In 1948 a guy was found dead on a beach in Adelaide, Australia. He was never identified and months after finding his body they found a fake pocket in his pants. It was torn from a copy of the book Rubiyat of Omar Khayyam (I googled that) and had a phrase on it which said “Tamam Shud” which means ended or finished in Persian.

They found the book that it came from but the owner denied ever knowing the guy. There was an encrypted message in the book that they found and it still hasn’t been cracked. Apparently there’s been a development recently that might identify him as H.C. Reynolds but it’s not 100% certain.

It’s a fascinating mystery – a woman checks into the Oslo Plaza Hotel, a five-star establishment, and is found dead in her room three days later. Initially assumed to have committed a suicide, but there’s no blood on her hands, no gunshot residue, no fingerprints on the bullets in the gun or the gun itself, which in addition to the odd position in which she is found on her bed really starts looking more like homicide.

Additionally, no personal belongings in the room besides clothes, shoes, a travel bag and an attaché full of bullets. Clothes and shoes have all producer labels/designations removed as well.

Contents of her stomach indicate that she had died the day before she was found, but a member of staff who knocked on her door heard a gunshot go off right after that, indicating someone’s presence inside.

The door was also locked from the inside but no one was there when they got in. Probably my favourite true crime thing.”

“One day grandfather just walked out the door and never came back.

This was before I was born. He left behind my grandmother and his three children. There was a state-wide search. My mom’s family never got closure.

Although, I think he might’ve had another family that he ran away to. But it still baffles me sometimes at night. My grandmother finally held a pseudo-funeral/memorial for him last year.”

“I wanna know if they kept going at it with the MK Ultra thing and how they do it now if it is.

Everything we know about it comes from 20,000 files that were misplaced, causing them to be missed when they attempted to destroy all documentation of the program.”

Basically a group of seven hikers start hiking the mountains when six of them start bleeding from the eyes, ears, nose and mouth. They all scream, start seizing, one even starts bashing their head on a rock. The remaining survivor flees, but later comes back to the bodies to get supplies. She’s found a few days later but refused to talk about it

A lot of people say its a deadly nerve agent that Russia was using (this happened in Siberia? I think) but that doesn’t explain why the last one survived, even going back and still being unaffected.”

“Harold Holt (Australian Prime Minister in the 1960’s) ‘disappeared’ while swimming at the beach.

He was never found.”

“A man only a year older than me went missing in my town, right near my place of work a few years ago. He just disappeared. I remember seeing the missing posters and the police conducting searches.

It has been several years and he is still listed as missing. I think about him from time to time and wonder whatever happened to him. I’d want to know about him.

There are so many cases like his, I hope his family and the other families one day get answers.”

5 young mentally handicap men went missing. They were gone for months thout any clues other than a few mysterious phone calls saying not to look for them. Their vehicle was found up on a mountain road a few days after they went missing. It turned on and ran perfectly fine

They were finally found in a trailer deep in the mountains,the strange thing was the one full corpse that was found starved and froze to death when there was plenty of food, water and heat in the trailer to last all 5 boys a year.

Some of the food had been eaten showing that they hadn’t had a problem accessing the food. While they did have impairments, they were all independent and would have know how to turn on the heat and get food, call for help.

To add the mystery rhe 5th man’s body was never found and while the others were cognitively impaired he suffered from schizophrenia and had several disturbing incidents leading up to their disappearance.

The full corpse that was found was wearing this man’s shoes, but wasn’t him, the corpse had been wearing boots the night they disappeared and its believed that the man either stole them or talked the other young man into giving him his boots.

What happens to the 5th man? Why did the man in the trailer starve to death surrounded by food. Why did the other men leave the trailer and die just 100s of feet away from it when there was food and warmth so close.

Why did they leave the car to begin with? Why didn’t they follow the trail back to the road?”

Are there any urban legends you want to know the truth behind?