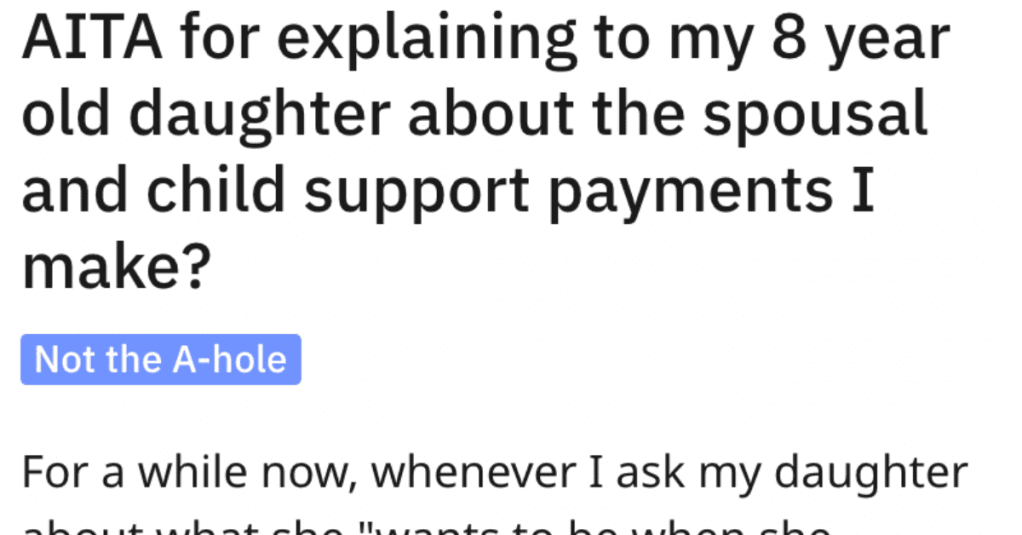 Is Eight Too Young To Understand How Alimony And Child Support Work?

I’ll confess that when I first started reading this post on Reddit’s Am I The A$$hole, I was prepared to disagree with the crowd. There’s something about a non-custodial parent making comments about the money they “give” their ex-partner that rubs me the wrong way.

That said, this guy added a lot of context, and so maybe he’s not a total jerk after all.

The conversation began because his daughter often says that what she wants to be when she grows up is “a mom.” He urges her to consider a career as well, because it’s possible to do both, but they leave it at that.

Recently, the daughter expressed interest in marine biology but again, after learning more, said it didn’t matter because her plan was to be a mom.

For a while now, whenever I ask my daughter about what she “wants to be when she grows up” she says she wants to be a mother…just like her mother.

A few times I explained that motherhood is a virtuous goal…but that she could be a mother and have some sort of career at the same time. She’d point out that her mother doesn’t work outside of the home…and we’d just leave it at that.

But one day we were watching a show that featured a marine biologist, and she started asking about the profession…how people become one, and what kind of work they do. I explained it as best I could and suggested we look it up if she wants to learn more.

But then she said it didn’t matter…because she had already decided that she was going to “be a mom”.

Dad decided to take the conversation further, stating that being a mom isn’t a job that earns money. Quite the opposite.

When the daughter asked how her mother could afford things, seeing that her only job is being a mom, the conversation wandered into dangerous territory.

I asked her if she understood that being a mother doesn’t earn money…it costs money. A lot of money. And suggested that a job like marine biologist would afford her the kind of income required to raise children.

She brought up the fact that her mother’s only job was being her mother, and asked how she has the money to pay for things.

He explained that he gave part of his income so that her mother could pay the rent and provide for her (the daughter). That when they were married they shared the money and now they still do, because of her.

The daughter moved on.

So I told her.

I said “Daddy gives part of what I earn to your mother. That’s how mommy pays for her house and food and your clothes and toys for you and everything else that you need. When we were together…we shared that money…and now that we aren’t married anymore…we still sort of do.”

She seemed satisfied with that explanation and that was pretty much the end of the conversation.

She apparently said something at home, though (we don’t know exactly what), and now his ex is angry. She doesn’t think it’s an appropriate topic for their daughter, and reminded OP that she’s entitled to every penny she gets.

Which is true, per the courts.

Flash forward a few weeks…and I get a series of extremely angry emails from my ex wife, who just had our daughter mention that Daddy pays for things.

I don’t know exactly in what context the comment was made…only that her mother feels I’m somehow sabotaging my daughter’s impression of her…and that I had no right to tell her about “adult things” and that she’s entitled to every penny she gets from me, and that I shouldn’t be “using it against” her.

So…AITA for being straight up with my kid about my obligations with respect to my ex’s finances…and that money has to come from somewhere?

So, does Reddit think this guy stepped out of line? Let’s find out!

The top comment pointed out that OP did nothing more than honestly answer a question (as long as he put it as diplomatically as he claims). 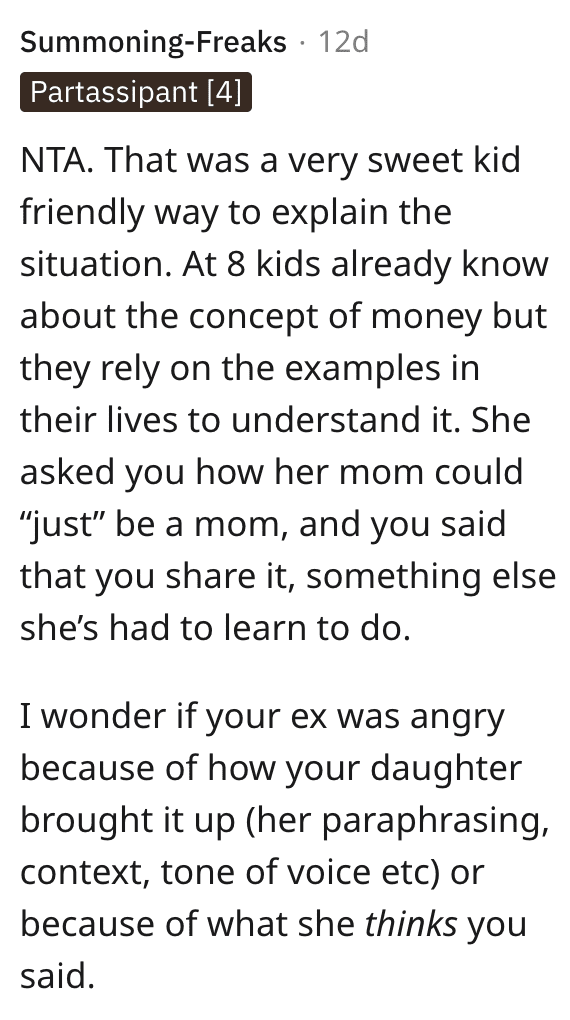 It might be a good exercise to ask how she would have had him answer the question differently. 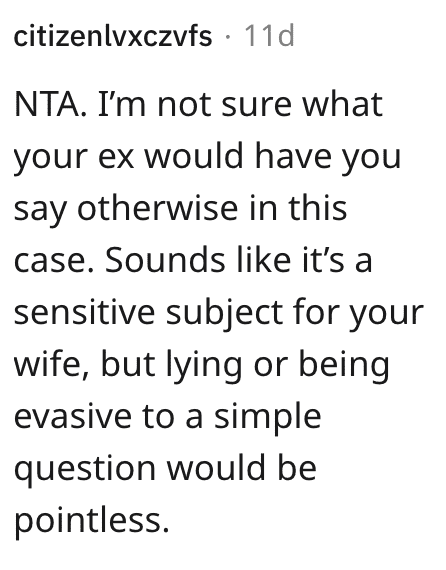 He likely did his bit to prepare his daughter for the realities of the world, which is part of the gig. 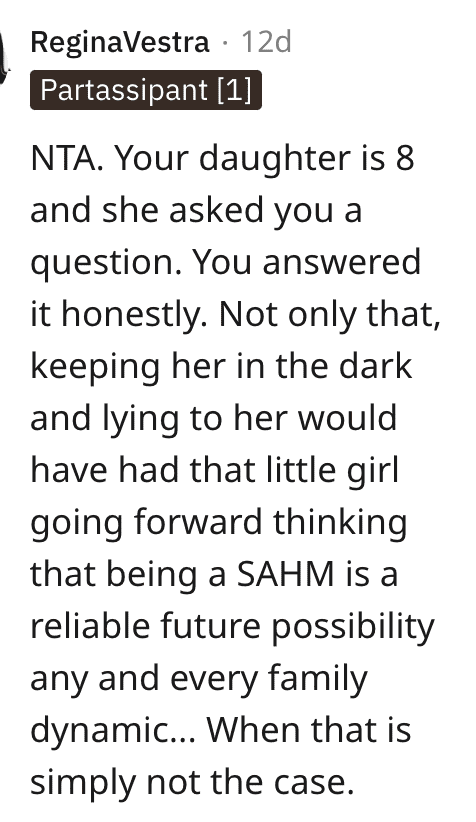 Because we all have to earn a living.

A few people did think that she might have been a bit young for the discussion, though. 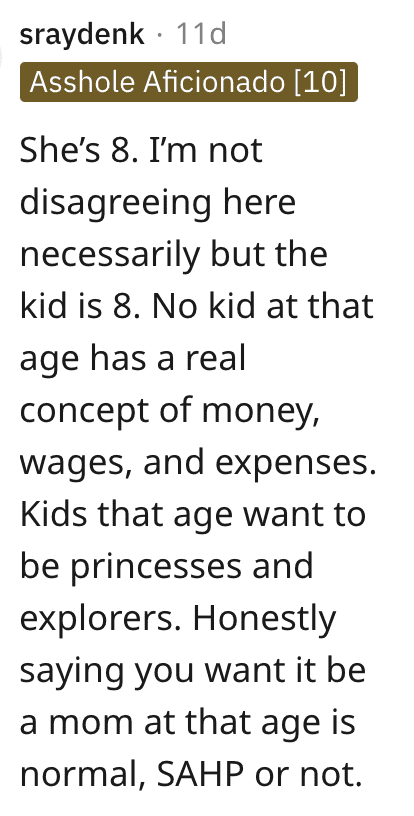 I don’t think it was wrong to answer her question, or to encourage her to explore the things that interest her.

What about you? If this was your ex, would you have been upset? Let’s talk about it in the comments!