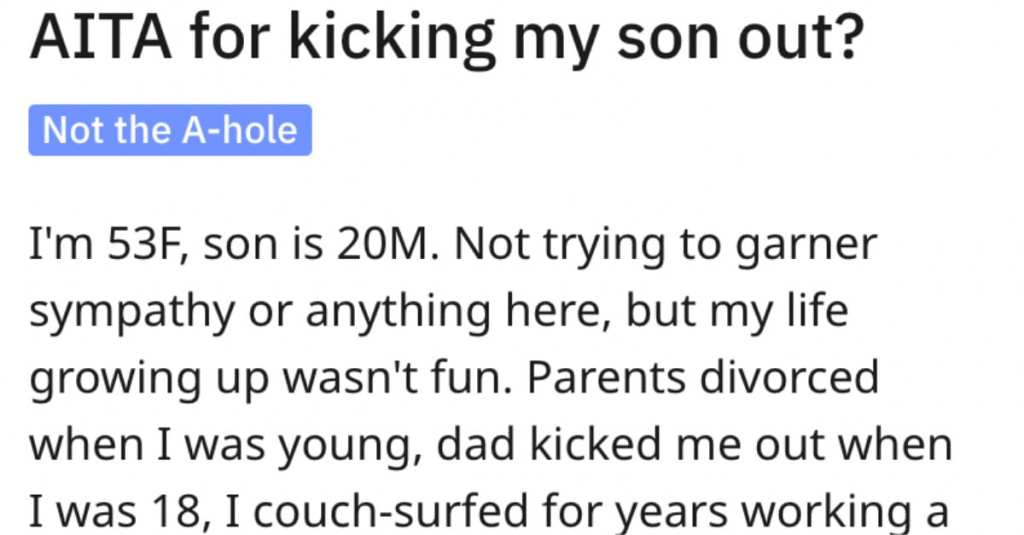 Is It Ever OK for a Parent to Kick Their Child Out of the House?

When people get that positive pregnancy test or stare into their newborn‘s face for the very first time, they imagine an entire life for that baby all at once. They make promises to that life and aim to keep them, though we all know deep down, I think, that life often won’t allow us the perfect path we’d like to travel.

This woman has two older children, and because of her own tough upbringing, had promised them and herself that they would never be out on their own with nowhere to go.

I’m 53F, son is 20M. Not trying to garner sympathy or anything here, but my life growing up wasn’t fun. Parents divorced when I was young, dad kicked me out when I was 18, I couch-surfed for years working a dead-end hotel job, and mom never did anything about it.

I promised I’d never put my own children through that. That they’d always be able to come home whenever they needed to.

Life, sadly, has reared its ugly head. Her son has drug problems, and even though she and her husband have tried everything at their disposal, he refuses to take them seriously or make a real effort to kick his troublesome habit.

At 20, he just doesn’t realize how this is terrifying his parents every day and night.

But my son’s been going down a dangerous path over the past two years or so. It started with weed, which I didn’t really mind much. But it progressed into more… illegal substances. He’s often driving under the influence and even though his father and I have put him through various therapies and rehabs, he claims that he’s fine and it’s just for fun.

They aren’t working, because he won’t take them seriously and thinks there isn’t anything wrong with what he’s doing. He doesn’t get that his father and I are terrified of him potentially overdosing or ruining his life.

After a recent DUI, she made the threat that if he didn’t make a serious effort to get clean, he wouldn’t be able to live there anymore.

He thought she was bluffing.

Well, it caught up to him and he was hit with a DUI charge last week. I told him he needed to get his act together or he would not be living here anymore. We’ve been more than generous with him and I hoped this whole situation would be the wake-up call he needed. He thought I was bluffing (he knows about my childhood and how I’d always said I’d never put my children through the same thing), but I was dead serious.

Every parent knows a threat is no good if you don’t follow it through, so when she caught him doing hard drugs in their house, she told him it was time to pack up and go.

She stuck to her guns, even though he said he would go to rehab one more time.

Last night I caught him in his room with more drugs I won’t specify here, but they were the harder stuff. I began packing up his stuff and told him he needed to find somewhere else to stay and would not be allowed back until he was clean.

He saw that I was serious, and said he’d go back to rehab for me, but I told him that every time he’d gone it didn’t do anything because he doesn’t think he has a problem.

He called me a b%*ch, so I told him to get out right now.

Her husband thought they should have given him another chance but their daughter, 16, is grateful to have him gone for the time being.

She’s feeling regrets and emotional and wonders whether she went too far.

Obviously it pains me that I had to break my promise to my kids, and obviously my son hates me right now.

My husband thinks I went too far and we could’ve gotten him more help, but my daughter (16F) says that I did the right thing.

So I’m conflicted. I may have acted in the heat of the moment, so help me look at this with clearer eyes.

Reddit’s about to weigh in, and hopefully make her feel better about drawing a line.

This wise person pointed out that sometimes knowing they have a safety net is exactly what keeps a person unafraid of falling. 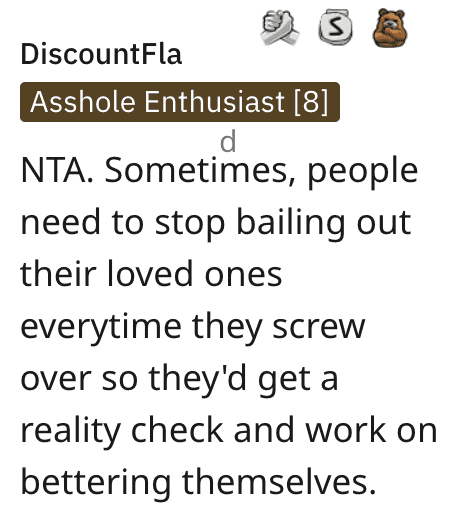 Several people pointed out that they have another child to consider, and that having the son there could put all of their safety in jeopardy.

And this commenter really drove the point home.

They have to consider both of their children’s best interests, which can be hard when they can seem to be at odds.

It can be hard to know where to draw the line, but it’s important that the son know there IS one. 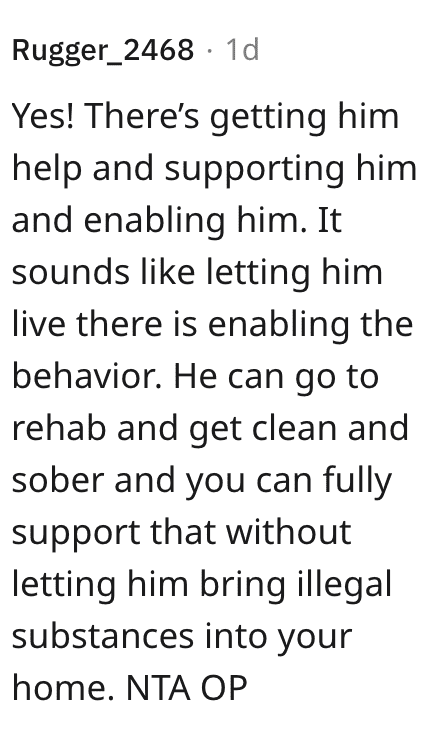 I cannot even imagine being in this position as a parent and I truly hope that I never am.

I think this woman sadly did what she had to do – what do you say? Would you have given him one more chance? Sound off in the comments!