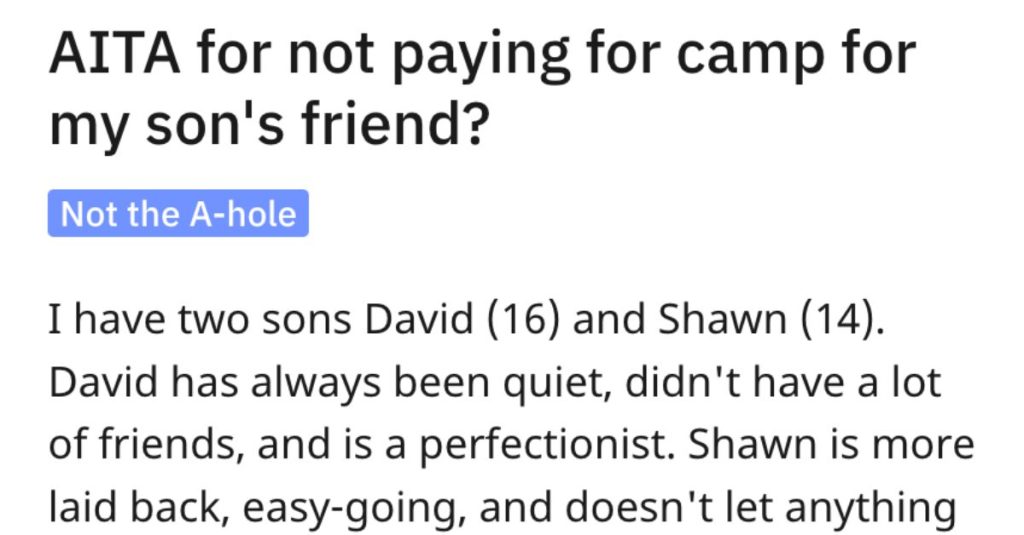 Is It Petty To Pull Scholarship Funds After Finding Out Your Son Is Being Bullied?

Bullying has always been a thing with kids. That said, there’s no arguing that things like the internet and social media have made it worse than ever, with parents and teachings scrambling for ways to keep up.

This mother has two boys who are teenagers now. One of them has had the same best friend since childhood, and after a medical tragedy that cost the friend his father at a young age, OP and her husband have covered summer camp fees for all three boys.

I have two sons David (16) and Shawn (14). David has always been quiet, didn’t have a lot of friends, and is a perfectionist. Shawn is more laid back, easy-going, and doesn’t let anything bother him.

Shawn’s best friend since they were little has been Frankie. About seven years ago, Frankie’s father had a stroke. He was left severely disabled and Frankie’s mother Beth is now the sole earner for the family.

With summer coming up, and knowing things were tough for the family, my husband and I arranged to pay to send Frankie to the same sleep away camp that we send our sons to. Save for 2020 when camp did not happen we have covered Frankie’s summer camp every year.

Recently, the older boy came out as gay. His parents were extremely supportive but OP learned later that there was bullying going on at school.

Two of the biggest culprits? The younger brother and the best friend.

David recently came out to us as gay. We of course accept and love our son, and he was very emotional. He revealed that there had been a great deal of bullying at school and Shawn and Frankie had been among the instigators.

Frankie had asked David if we had figured out that he was a [slur] yet, made comments about him staring at other boys in the locker room, and told him he belonged in the girl’s room.

They dealt sternly with their younger son so that he could see that his words and actions were harmful, but when they called the friend’s mother to inform her, she was dismissive.

When I confronted Shawn, he told me it was just playing around, it wasn’t serious, and it was no big deal. I told him that his brother took it seriously, it was a big deal, and it was unacceptable.

I’ve taken away his video games until the end of the school year, and grounded him for a month. He has since apologized to his brother.

I called Beth and told her what had happened. She was very dismissive. I told her that my son’s sexuality was not a punchline and out of respect for his friendship with Shawn to have Frankie leave David alone.

Beth replied that David made himself a target by being an overly sensitive tattletale. I told her I didn’t want to hear that Frankie had said another bad word about David. She said boys will be boys, they’ll have to work it out, and she’s not getting involved.

After several unsatisfactory conversations, OP decided to call the camp and let them know they would not be sponsoring the friend’s tuition that summer and why.

The friend will likely not know why they cannot attend, because the tuition was always covered anonymously.

The first deposit for camp was due this week and I made the decision not to sponsor Frankie. I called the camp office and explained that due to bullying on Frankie’s part I would not be paying for camp this year.

Beth does not know that I’ve been sponsoring camp since Frankie was 7 as she is only told that an anonymous donor covered camp for him. The only people that know are me, my husband, and the camp office.

OP’s husband thinks maybe she went too far, but OP is standing firm.

When I told my husband what I had done, he understood why but felt badly that Frankie wouldn’t get to go and Shawn would be without his best friend at camp.

He pointed out that Beth would have likely said something if she knew we were paying for camp, but I feel like that’s missing the point. He shouldn’t act that way because it’s wrong, not because we pay for camp.

There’s no way that Beth can afford camp and it’s likely going to affect her job to have Frankie at home during the day. I feel I made the right choice to protect my son but still feel guilty.

What does Reddit think? You know they’re not afraid to tell us!

The top comment says that OP shouldn’t feel badly for putting her older son first, and also perhaps the friend isn’t the best influence on the younger son, either. 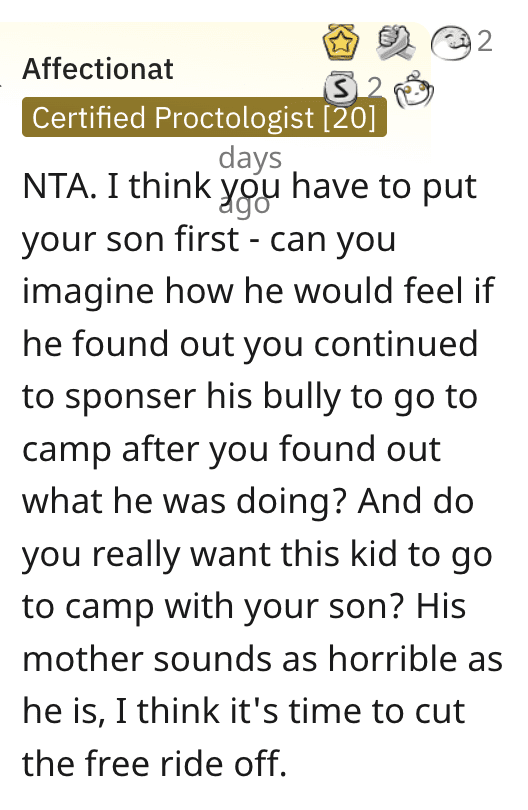 In fact, the break during camp week might be just what the younger son needs.

Actions have consequences, and these two have no one to blame but themselves. 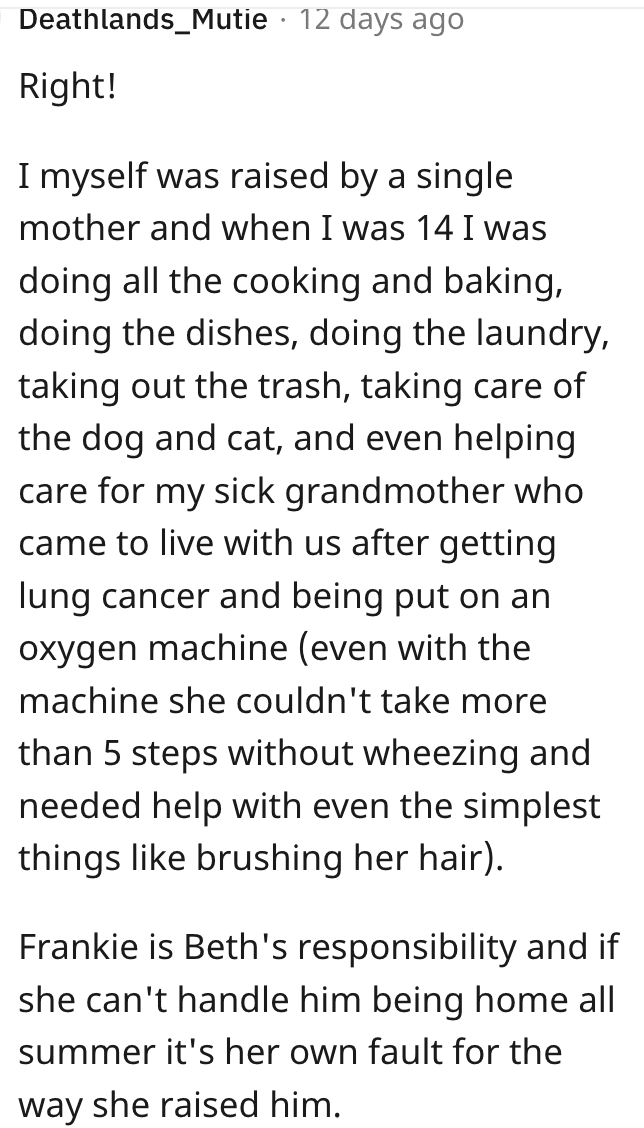 There are probably people out there who deserve the scholarship more than a bullying “friend.” 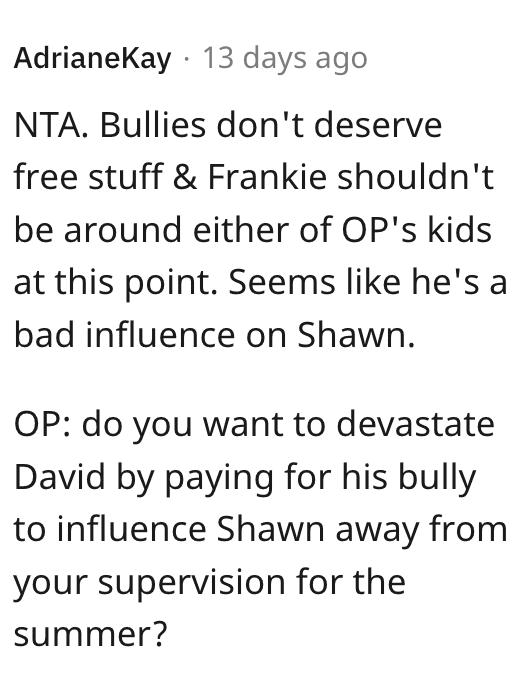 Being a parent is hard, but that’s no excuse. 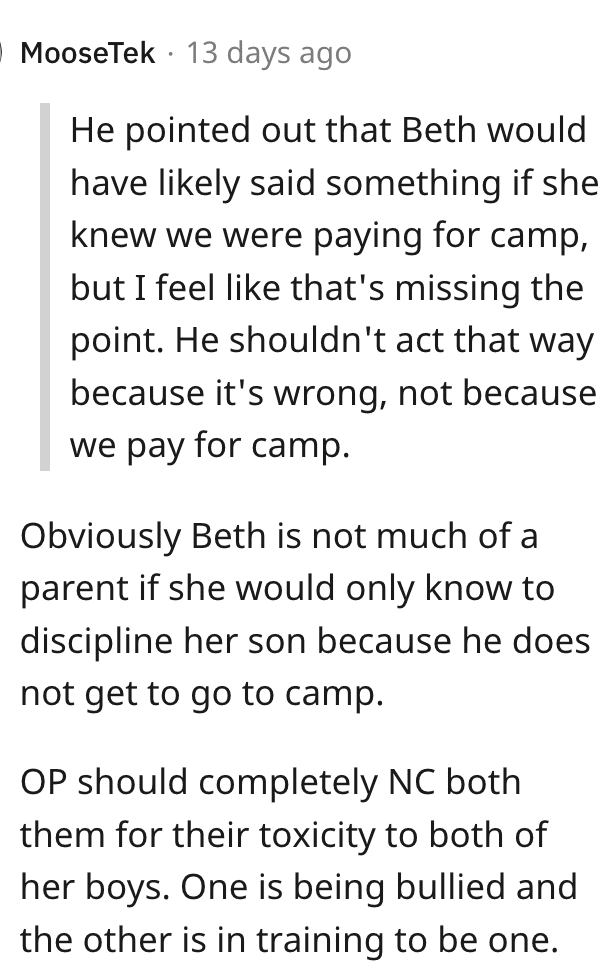 This is honestly a tough call, and I understand why she feels guilty, but she really shouldn’t.

What would you have done in OP’s shoes? Let those opinions fly in the comments!