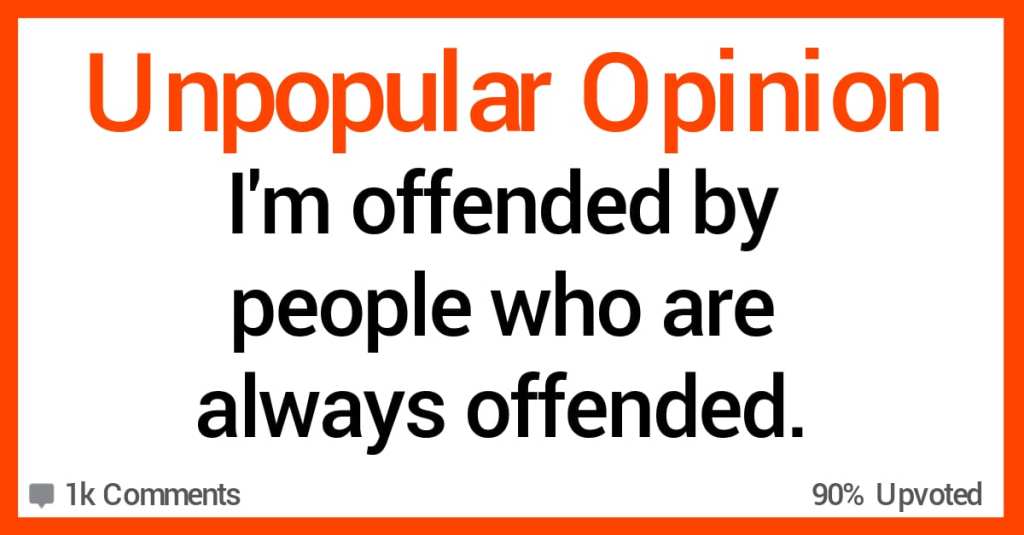 Is It Valid To Claim to Be Offended By People Who Are “Constantly” Offended?

You’ll hear people take issue these days with how people are “offended by everything” and we have to walk on eggshells so as not to “trigger” someone into being offended, and even though it’s obvious that there are a certain number of people who feel this way, I’m not sure how true it is.

It seems more like people are just tired of being quiet about the things that are upsetting to them and are expecting others to take their feelings into account.

That’s probably what makes this opinion unpopular, so it’s found the forum where it belongs!

That said, you put up your unpopular opinion on Reddit and you get responses, so let’s see what the internet-at-large really thinks!

Most on here are because a lot of legit unpopular opinions would get down voted due to the majority that would disagree.

That’s how you know that you have an opinion that is not popular.

If everyone wasn’t so afraid of down votes, we’d see a lot more honest s**t around here.

That makes you one of those people who are constantly offended that you are complaining about.

I grew up in the whole sticks and stones may break my bones but words will never hurt me era.

It is not logically impossible given the premises stated, so it is not a paradox.

The simple solution is that the OP should be outraged both at himself and others that display that behaviour, which is perfectly possible.

You are exactly what you’re complaining about.

As an example; The vast majority of people who think being “PC” is the right way to go are not “constantly” talking about how offended they are with non-PC people.

But I s**t you not, every single person I know who “hates PC culture” makes sure to complain about it and be offended by it every single time they’re reminded of it’s existence.

The ‘hates PC culture’ crowd can shut up now.

The experiment is over and it was a catastrophe.

The ‘non PC, tells it like it is’ person was put in the highest position of power….and hundreds of thousands of people died unnecessarily, there were attacks on democracy and he was arguably the worst president in history.

Lack of tact, nuance and thoughtfulness (ie being ‘non PC’) are not good qualities in a person.

But people are offended most of the time.

You have become the enemy you swore to destroy.

“I have become what I beheld and I am content that I have done right!”

I think it’s natural to be offended sometimes.

If you have things you hold dear, and someone threatens them, then you will of course want to rise up and protect them. Conversely, people who are never offended either don’t deeply care about anything or are never threatened. But even the most sheltered, privileged person cannot escape the evils of life forever.

Some people are so dead inside that they care for nothing, but in my opinion that’s unnatural rather than something to celebrate.

The viewpoint you have expressed can be caused by several situations:

But it’s also possible that:

In cases where you believe the person’s values are flat out wrong and they shouldn’t care about that thing at all, then it’s hard to reach a resolution.

But when you simply think people aren’t under attack, and yet a ton of them seem to be reacting with fear and anger, then it may be time to ask yourself if you’re missing something.

As a white guy, I guarantee you that this sort of reasoned breakdown would get a lot of “suck it up”-style responses from cis white Republicans if it were to end up on YouTube, Facebook, etc.

Especially the bit about unseen effects of attacks on values, and the apathy.

What’s funny is they miss the irony of just how frequently offended they themselves are by other religions, masks, and gay people.

4. We all have our reasons.

Dude, your extra chromosome is showing (to someone else)

My son has a chromosomal duplication. He’s going to face a fu**ing hard life and at one point there was nothing there. He’s not a monster, he’s a lovely kid who’s trying to learn and grow despite pulling a sh**ty draw on the genetic lottery.

My life has been thrown completely upside down. I was a full time farm manager and heavily involved in the scouts and that’s how I identified. I now just work 2 days a week at a job that means nothing to me, take him to a many of the therapy sessions as I can and do as much therapy at home as I can.

OP, I’m glad you’ve got it fairly easy but believe me, one s*%tty comment can ruin your day.

It is so easy to offend people nowadays. I just stopped caring. If someone goes “I am offended”, I tell them “So what?”.

People don’t realize that nothing changes and it does not matter if they are offended or not.

The world does not revolve around them.

I dunno about you but isn’t this just on Twitter?

I know a good handful of people who are constantly offended and also offended on behalf of others.

All social media are toxic. The commenter is probably lucky that they haven’t seen the toxicity of YouTube and Reddit.

If the trait or behavior signals a deliberate attempt or willful indifference toward hurting, harming, or degrading the dignity of others outside reasons of reasonable and proportionate defense, retaliation, or punishment – they yes, people have every right to be offended at that kind of behavior.

“Bettering yourself” is also vague. Better in what way? Not in the conventional ways of being stronger, smarter, braver, more competent, more successful, more healthy, and the usual ways we tend to size up other’s worth on a day-to-day basis. All those things mentioned, no matter how impressive or necessary, tell me nothing about whether the self-improver hurts, harms, or demeans the dignity of others outside the reasons of reasonable and proportionate defense, retaliation, or punishment.

Lots of successful people turn out to say and do really hurtful, dishonest, exploitative, bigoted, and even abusive things to others. Less bad if that person were long-term unemployed yet kind-hearted and helpful than to be even a mid-level successful a**hole.

There you have it – I knew they would have thoughts!

Where do you come down on this idea? Tell us in the comments!