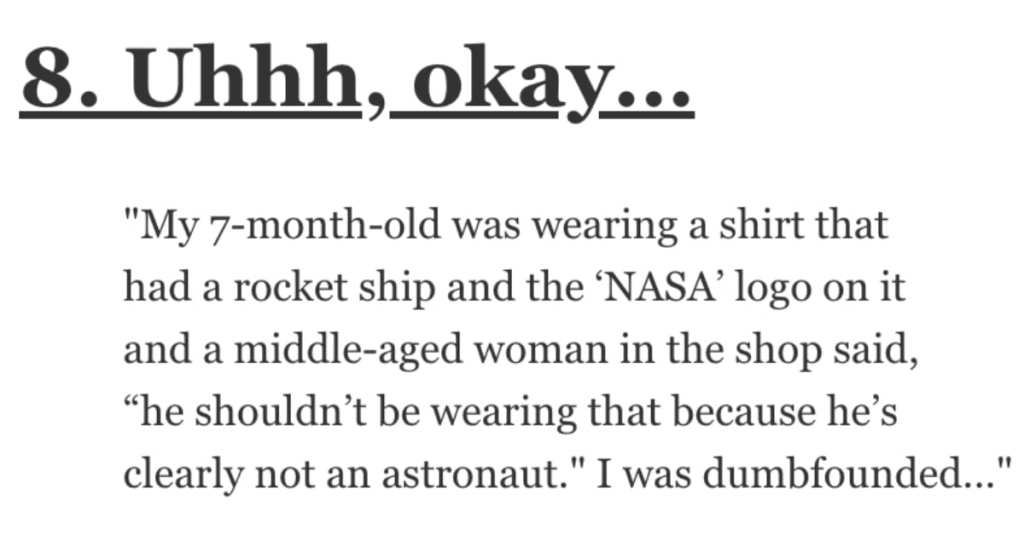 People Shared Their Stories About Harmless Things Someone Get Offended by

I’m not gonna get into the nitty-gritty details here, but I asked someone something very basic and polite not too long ago and they looked at me like I had a second head on my shoulders.

My point is that some folks get all worked up over nothing at all.

What’s the most inoffensive thing you’ve someone get offended by?

“We were choosing a mascot for a summer camp where I worked. It was the first day of camp and we’d always let the campers vote on a mascot that we’d use for the rest of the summer as sort of a bonding thing.

This year, the kids voted for Wolves as the mascot. It was almost unanimous. But one kid, probably about 9 or 10, threw a fit because wolves are “bad guys” and predators and killers and he doesn’t want to be a wolf, he wants to be a hero. He refused to participate in any team activities because he didn’t want to be on a team with the “bad guys.”

At one point, we brought in a guy in a full mascot wolf costume for some anti-bullying program and the kid had a massive tantrum. I almost felt like we were going to learn at some point that his brother was killed by wolves or some other tragic origin story.

I did feel bad for the boy because I was fairly certain he had some kind of unaddressed emotional difficulties or something, but we weren’t going to change the mascot name that almost everyone voted for.

The really sad thing is that wolf populations have suffered a lot due to stereotypes that they’re “bad.””

2. Mind your own business.

I was in a car accident a few years ago and it f*cked my leg up. Since then I’ve been using a walking stick. I was walking to shop (pre-pandemic) and an old bloke gave me the dirtiest look i’ve ever seen.

He actually got quite p*ssy just seeing me using a stick. Like, my dude, i’m just out trying to buy some milk, I don’t need your sh*t today.”

3. What are you talking about?

“Maybe 22 years ago, I had a phone interview with a baking company. I didn’t care to have my peers know what I was up to so I took the call on my cell phone in my car. The call was crystal clear and no technical issues.

At one point, they had mentioned the weather and asked how it was where I was. I told him that I was sitting in my car and I could see that it was actively snowing and what not. The interviewer asked me, “are you taking this call on a cell phone?”

I told him I was. Then he asked me if I thought that was appropriate. I asked him what he meant by that. He said he thought it was kind of rude to take a formal call on a cell phone. I told him I would be more than happy to conclude the interview if talking on a cell phone was an issue.

If he was interested, I’d be happy to continue it the next day when I’d be at a desk. He again repeated how rude he thought it was that I had called from a cell phone and that there was no need to continue the interview process. I disagreed with the first point but did agree with the second.

To this day, I wonder what the hell he was talking about and where he was coming from.”

4. Just trying not to die over here.

“One time someone got offended when I put on my seatbelt

She thought I was commenting on her ability to drive.”

“We used an app at work called Bonfyre.

One person refused to use it because bonfires are for witchcraft and pagans.”

“I spent 9 hours deep-cleaning the house for an inspection. I went above and beyond, clearing my work schedule and going the extra mile, and my roommate “double checked” my work.

He had a complete psychotic meltdown because I forgot to sweep underneath the couch.

I moved out the next day and never spoke to him again.”

“I was at the vet with my cat and he sneezed.

This was apperently very offensive to an elder woman (she was there with a corgi) and she started screaming at me for about 30 minutes about pet hygiene.”

“My 7-month-old was wearing a shirt that had a rocket ship and the ‘NASA’ logo on it and a middle-aged woman in the shop said, “he shouldn’t be wearing that because he’s clearly not an astronaut.”

“I had a coworker who got mad at me because I asked her not to tickle me.

(a) That’s inappropriate at work; (b) we’re not children, we’re not in a relationship, we’re not family; (c) I DON’T LIKE BEING TICKLED.

She flipped out and said everyone likes being tickled and I was being mean to her. Happily my boss had my back.

Edit: this happened over a decade ago, I don’t work with that woman or for that company. In fact, even the company doesn’t exist anymore.

I am also a woman.

The coworker was very young and immature. This was her first job, her first time in a professional environment, and she really had no clue about professional workplace behavior. I wasn’t upset because she truly thought she was being friendly.

“When I was a child, my mom paid for something with a check.

The cashier remarked that my mom had nice hand writing.

My mom flew off the handle, and we had to storm out of the shop in outrage.

To this day, I have no idea what happened.”

“I worked at a restaurant and we put up some Halloween decorations.

We had to take them all down when someone found the glittery skull decoration offensive .”

“Had someone get offended by me calling my brother “bro”. They insisted that I was racist and that white people can’t be related to Mexicans.

Like seriously lady. That’s not how genetics work. We are 100% related and are a mix of white and Native American. Its not that unheard of for one biological sibling to come out lighter or darker than the other.

And even if we weren’t related… Seriously? I’m racist for calling someone close to me my bro despite being different skin tones? Seriously?

Thank you for coming to my rant session. Have a good day.”

What’s the most inoffensive thing that you’ve seen something get upset about?