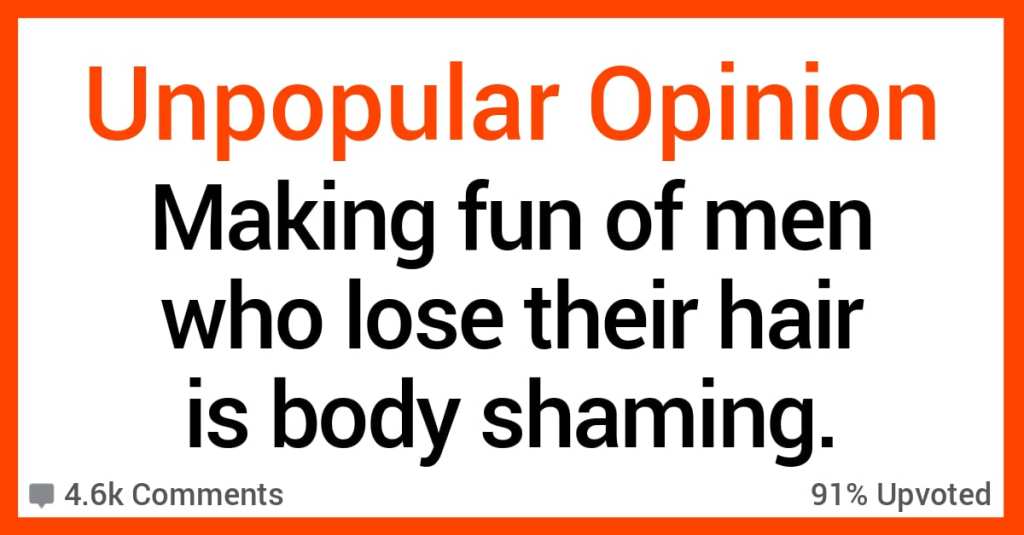 Is Making Fun of Balding Men Body Shaming? Here’s What People Had to Say.

If you’re a man, you pretty much have two pathways regarding your hair as you get older: it either goes gray or you lose most or all of it.

And if you’re in that lucky small percentage that just keeps a full head of beautiful black or brown or blond or red hair…well, I don’t really want to be your friend.

But is it body shaming to make fun of guys for losing their hair? This person certainly seems to think so.

Let’s see how people on Reddit responded to these comments.

“Nothing feels better than showing up to a family gathering and the first thing your sister in-law says  is Wow what happened to your hair? Maybe Rogaine would help?”

Good to see you too…”

I’ve saved an absurd amount of time and money over the years as a result, and it looks fine. Maybe I don’t attract some people–plenty of people I have attracted regardless.

Have a decent personality and you’ll do alright.”

“A lot of people think it’s okay to make fun of:

Unfortunately the world isn’t ready to talk about how this hurts people.”

“If a guy said it hurt their feelings then he gets made fun of for having feelings.”

“Men’s feelings aren’t very important to a large portion of modern society. I have unfortunately internalized those feelings pretty strongly and have some deep rooted beliefs that my well-being is inherently less valuable than others.

I’m working through this with my therapist thankfully, but even if I can mostly get over my internalized feelings, that won’t change all the bigoted people in the world around me.”

This is unfortunately where feminism has failed men so far. I get upset when I hear small d*ck jokes, or mocking men’s appearance for things they have zero control over (height, hair, etc).

It absolutely is body shaming and it needs to stop.”

And I’m married to a short, fat, balding man. After 8 years of marriage, he’s still my best friend, he’s the world’s best dad, and he’s so handsome that other women comment on it when they first meet him.

And he was bald and chubby when we got married.”

“My son started losing his hair in his early 20s and it really bothered him. He tried several things to keep it but ultimately went with it and shaved his head. He’s now in his 30s and wears that look well and it doesn’t seem to bother him any more.

I know a few people teased him about it at first. “You’re getting thin up there, ain’t ya?” and that sort of thing.

I know a couple of women with thinning hair and no one would dare say anything to them about it. It’s a double standard.”

“As a bald person I have never see someone actually make fun of me.

Friendly banter yes, but never made fun of.

I live in Europe, if that matters.”

“Hey here’s a thought of the day: Why don’t we stop making fun of others, mind our own business, and live in harmony? I know I know….hippy chick talk…but d*mn I have enough on my plate to last a good long while without me pointing out people who are balding.

I happen to think that some men look pretty good with their shiny heads.”

“I watched my husband lose his hair and it really devastated him. I can’t imagine how traumatic it must be for a man to have to go through that because it’s not like there’s any easy solution (unless you’re rich of course).

Good news is that when a man finally summons up the courage to shave off his thinning hair, he always looks so much better. My husband shaved his after years of worrying about what he’d look like bald, and he looks amazing! He has so much more confidence now and it’s lovely to see.”

“As a man who lost his hair at 17, yea it sucks at the time but just shave it or keep it short and move on. If you can grow a beard it’s a plus.

Otherwise women who you would want to be with could really care less, some actually are into shaved heads big time!. If they care, you’re dodging a bullet anyways.”

“If we are going to create a system of positivity in relation to speech surrounding women, that’s great, but if it also doesn’t apply to men, then don’t be surprised if people don’t recognize that as a gross double standard and as a clearly unequal treatment.

Many young men in the modern narcissistic world we live in already have enough trouble with feelings of worthlessness, depression and inadequacy (which is clear when looking at the rising suicide rate for young men in America).

And double standards like this only further allows the shaming and humiliation those who are already fragile and vulnerable individuals.”

In the comments, share your thoughts about this with us.

We can’t wait to hear what you have to say. Thanks in advance!