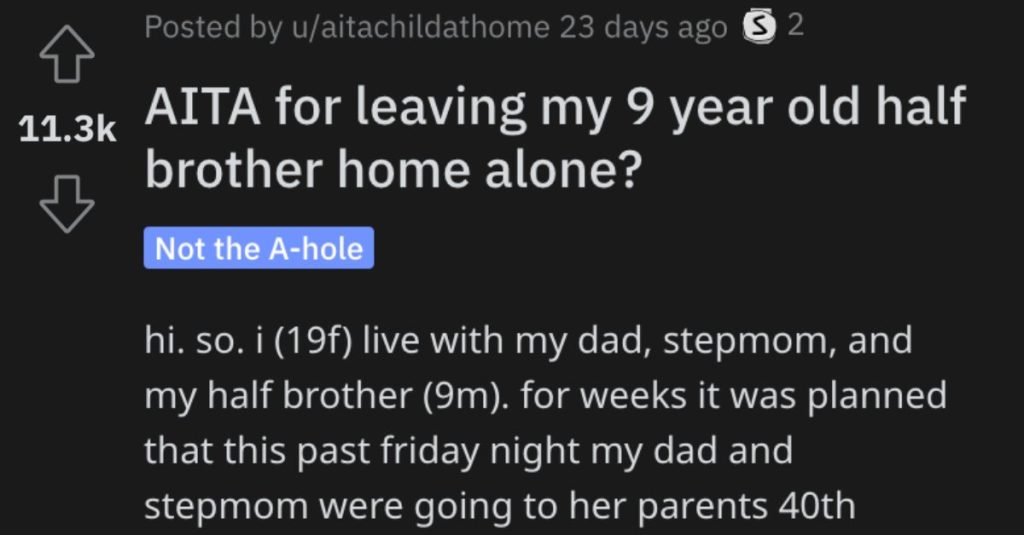 Is She Wrong for Leaving Her 9-Year-Old Half-Brother Home Alone? People Responded.

How old are you when you started staying home alone?

I grew up with four siblings in my house, so it seemed like someone was always home, but I can see how parents would get mad about a 9-year-old being left all alone.

But did this teenager act like an a**hole for doing that?

Take a look at her story and see what you think.

AITA for leaving my 9 year old half brother home alone?

“I (19f) live with my dad, stepmom, and my half brother (9m). For weeks it was planned that this past friday night my dad and stepmom were going to her parents 40th wedding anniversary at some fancy restaurant.

Me and my brother weren’t invited cuz we’re “not adults”. Since i didn’t get a invitation and didn’t wanna be stuck at home with just my brother i decided to make plans myself and me and my BF were to go on a date. My dad and stepmom wanted me to babysit my brother but like they’ve never paid me for babysitting him ever and he’s pretty hyperactive so no thanks. after complaining for a bit they hired a babysitter for him.

So friday comes around and I’m doing my hair & makeup and all that getting ready for the date. my dad and stepmom had already left for the dinner. While I was getting ready i get a call from my stepmom in the car on the way to the restaurant saying that the babysitter canceled and that i’d have to stay home and watch him.

I told her i was sorry but i had plans i didn’t want to cancel. She said it was too late to call anyone and i had to stay. I said i can’t and that i’d be at home for another 40ish minutes (which would be enough time for them to come back home) and they have to be back then to watch him. she just hung up.

Well I finished getting ready and even waited another 15 minutes and they weren’t back yet. I texted them i was leaving and left my brother home alone. we live in a nice neighbourhood and i’m pretty sure I stayed home alone when I was 10 so I was sure it’d be fine, especially since they didn’t bother to come back home.

Anyways long story short when I came back home they were already home and my stepmom was pi**ed that i left my brother home alone. She called me irresponsible and said I didn’t care about family etc. She also told me I’d have to pay for this vase my brother broke. I feel this is unreasonable since I gave them a warning I was leaving and they had the opportunity to come back but idk. AITA?

Oh and just to add in case people are wondering if I paid rent or whatever: My grandmother gifted the house to my mom & dad as a wedding gift. When my mom left my dad she gave him the house under the condition I could live there up until I finish grad school if I wanted to.”

Now let’s see how folks reacted to this on Reddit.

This person said she’s NTA and that this wasn’t her responsibility. 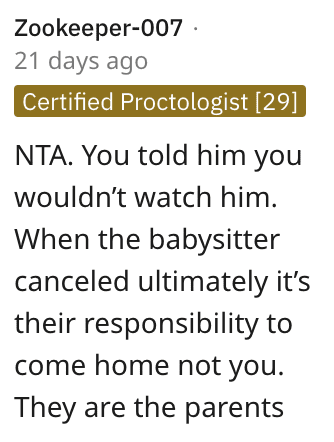 Another individual also said she’s NTA and they don’t even think there was a babysitter in the first place.

Another Reddit user said she’s NTA and she should plan to move out.