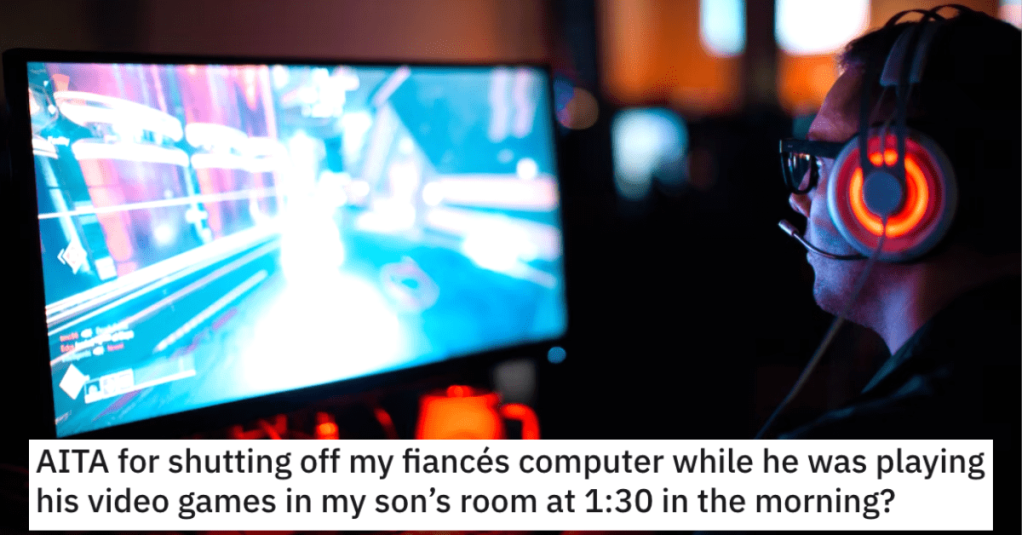 Is She Wrong for Shutting off Her Fiancée’s Video Game in Their Son’s Room at 1:30 in the Morning? People Responded.

I’m not a gamer at all, so it surprises me when I read stories like this one about how much time adults spend playing video games.

And this one has a bit of a twist because this woman was pretty angry at her fiancée because he was playing games in the middle of the night in their baby’s room.

So did she act like a jerk in the heat of the moment?

Take a look below and see what you think…

AITA for shutting off my fiancée’s computer while he was playing his video games in my son’s room at 1:30 in the morning?

“When we moved back to my family’s house about a year ago, my fiancé set up his pc gaming station in my (elementary school-aged) son’s room since we have such a limited amount of space. He is not my son’s biological father.

My fiancé and I have a baby and who sleeps in our room, there is literally no extra space at all in our bedroom. I agreed to let him have his computer and desk in my son’s room as it was the only room out of the two with just enough space. My fiancé has always claimed that gaming stops him from going out to bars or spending extra money we don’t have. Since moving back, I stressed to him that I don’t want him to play late at night because I don’t want him to disrupt my son’s sleep and affect his circadian rhythm.

Over the past year, my fiancé hasn’t respected my request as has continued to play video games til pretty late at night, sometimes up to 4 am on weekends. Whenever I bring it up to my fiancé, my son always insists that he doesn’t mind that my fiancé is playing games in his room.

My son probably enjoys the company but he also makes a pillow “wall” around his face to block the bright lights every night. It bothers me since I know my son could be getting a better nights sleep with out a mouse and keyboard clicking away with constant bright flashing lights from the computer monitor.

About a month ago, I caught my fiancé vaping in my son’s room while playing video games while my son sleeps. I lost my marbles at my fiancé and told him how he doesn’t give a c**p about my son’s health or sleep. He claimed he doesn’t believe in circadian rhythm. I made a very big deal of this and gave him an ultimatum that he needed to stop gaming late at night and to never vape in my son’s room again or we were done.

He promised to stop and has been pretty consistent by stopping at 10 pm and not vaping, that I am aware of. Well last night, I heard mumbling from my son’s room which woke me up around 1:30 am and it brought rage to me. I demanded that my fiancé to get off his game, and he said he was “almost done, just 20 more minutes until the match was over”. I told him to get out of my son’s room or i would be turning off the computer… I ended up pushing the power button to turn it off.

AITA for turning off my fiancés computer during his match? I know my son claims he doesn’t care that my fiancé plays in his room. As his mom, I want my son to get a good nights rest.

Additionally, my fiancé never wakes up early to help me out with our child and sleeps in til 10:30 am or later every single weekend!”

Now take a look at what Reddit users had to say.

One person said she’s NTA in this instance but she is an a**hole for letting him play video games in there at all. 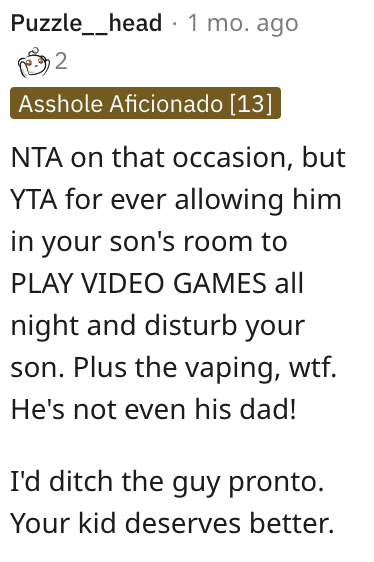 And this Reddit user said she’s letting this guy walk all over her. 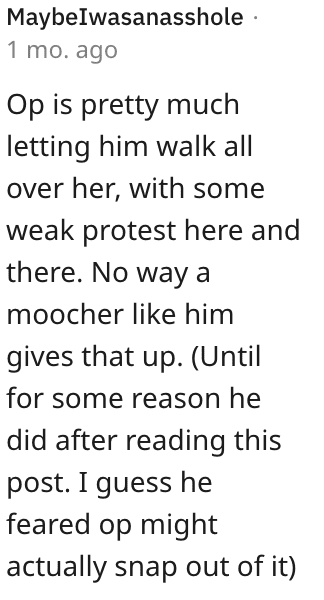 Another individual said they hope she doesn’t marry this guy…ouch. 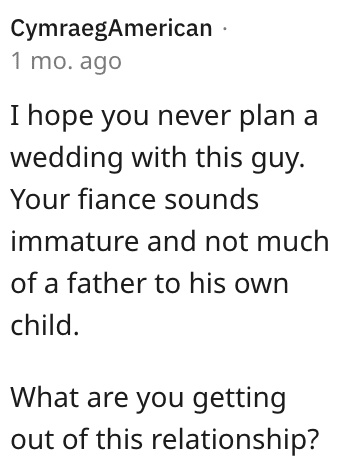 Sound off in the comments and give us an earful!