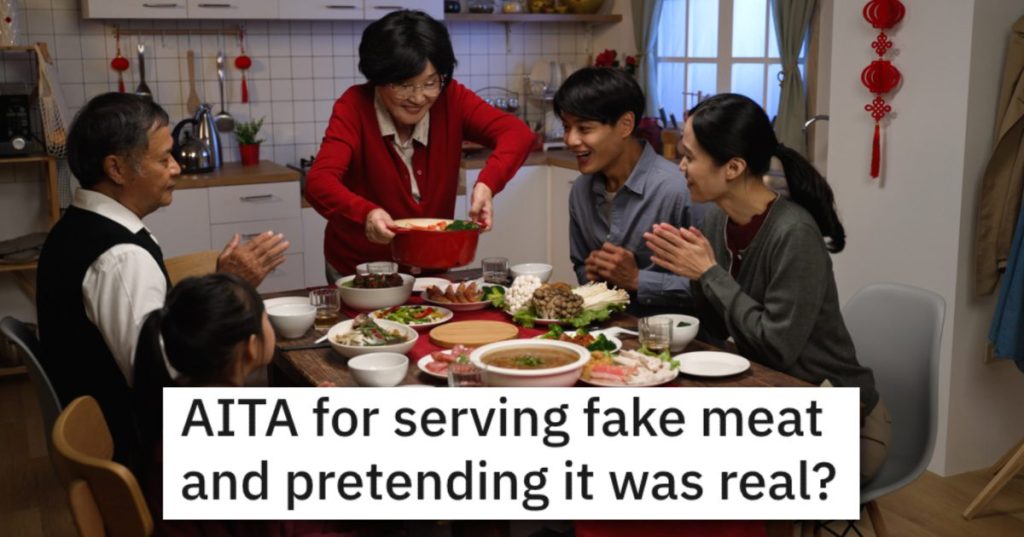 Is There Anything Wrong Into Tricking Someone Into Eating Vegetarian?

I think we can all agree at this point that tricking someone who eats vegetarian or vegan (or any kind of necessary restricted diet) into eating something they’re morally opposed to – or avoiding for health reasons – would be wrong.

What happens when you reverse the situation, though? Is there anything wrong with feeding vegetarian food to a person with no diet restrictions but telling them it contains meat?

That’s the question this OP has since she’s sick of dirtying every pan in the house making two dinners for her family, who is split down the middle as far as consuming meat.

My two daughters are vegetarian but my husband and son are not. I’m probably what they would call a “flexitarian”.

My son and husband always turn up their noses at tofu or any other meat alternatives – they say it’s just “weird” that it’s made to resemble real meat, so it’s really the concept and not the taste. There are no allergies.

Her daughters got the idea to make two pots of spaghetti sauce, as usual, but to make them both vegetarian instead of putting meat into the one for their father and brother.

Their mom thought this would be a good experiment that could potentially save her some time and money in the future, and after everyone consumed the meal and said they enjoyed it, she thought she’d won.

My family and I often make two versions of dinner – one meat, one real, and twice the amount of pots and pans. There is an equal distribution of cleaning and cooking in this house, thankfully.

My daughters had a fun prank idea of making two pots of spaghetti sauce, under the pretense that one was meat (they were both the soy ground beef). The goal here was to see if their brother and father actually hated the meat and to see if we could maybe save some dishes and time (in the future).

Her non-vegetarian family, though, was upset at being lied to about what they were eating, so Mom is turning to Reddit for a final verdict.

Everyone loved dinner, both husband and son finished their plates. This was when my youngest couldn’t hold it in anymore and told them. They both got VERY upset about being fed something other than what they were told.

Let’s hear what they have to say!

The top comment says, in no uncertain terms, that lying to folks about food being served is wrong, full stop. 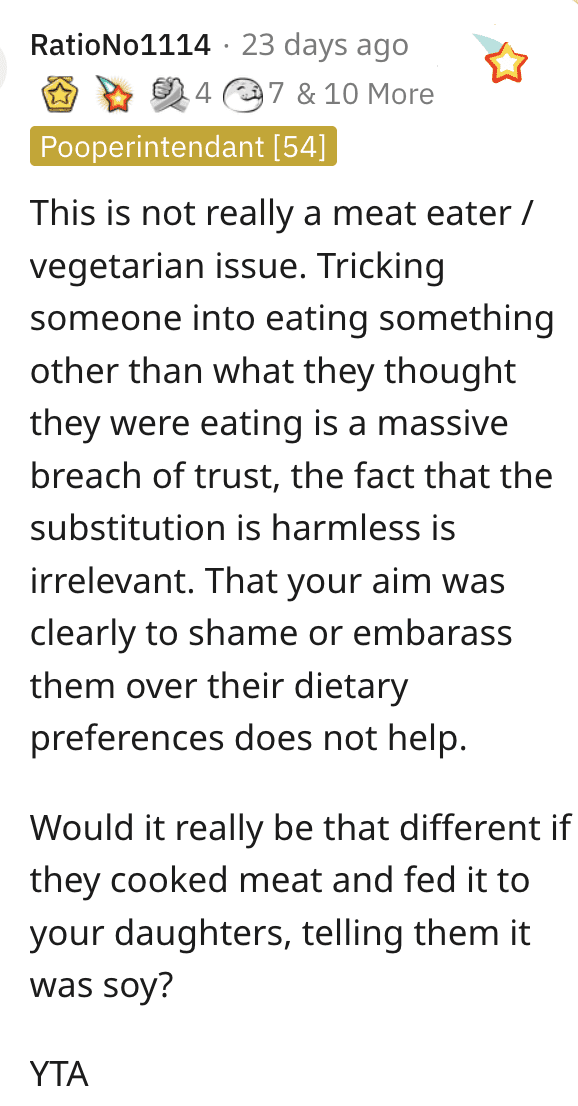 I mean, if logic is your thing… 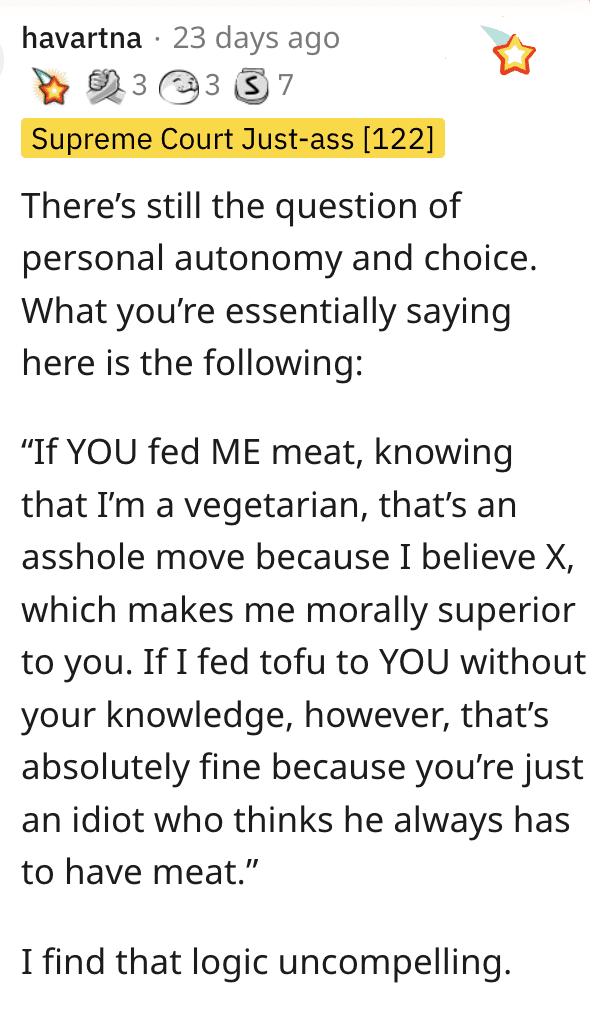 The discussion turned a bit philosophical in places. 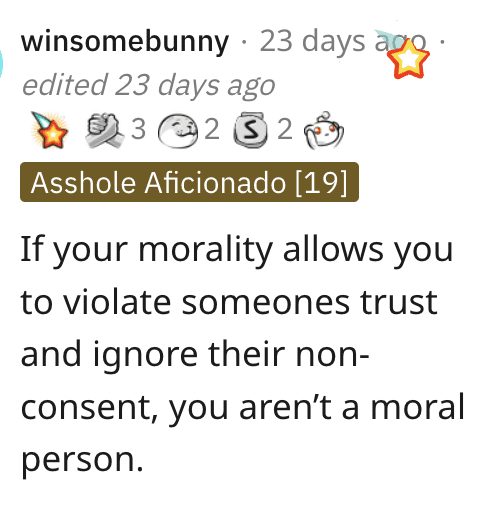 Could it really be that simple? 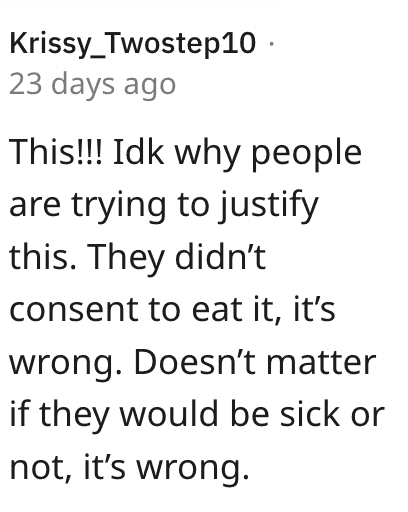 They say there are no good rationalizations here. 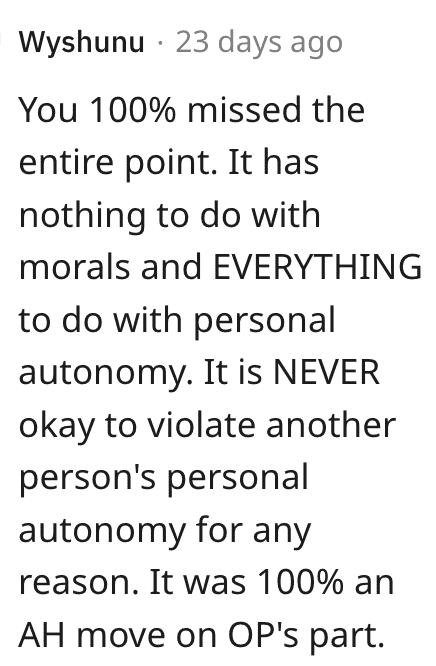 I’d love an update and to know whether or not OP apologized.

Do you agree with the masses or do you think this was a harmless experiment? Tell us which and why in the comments!