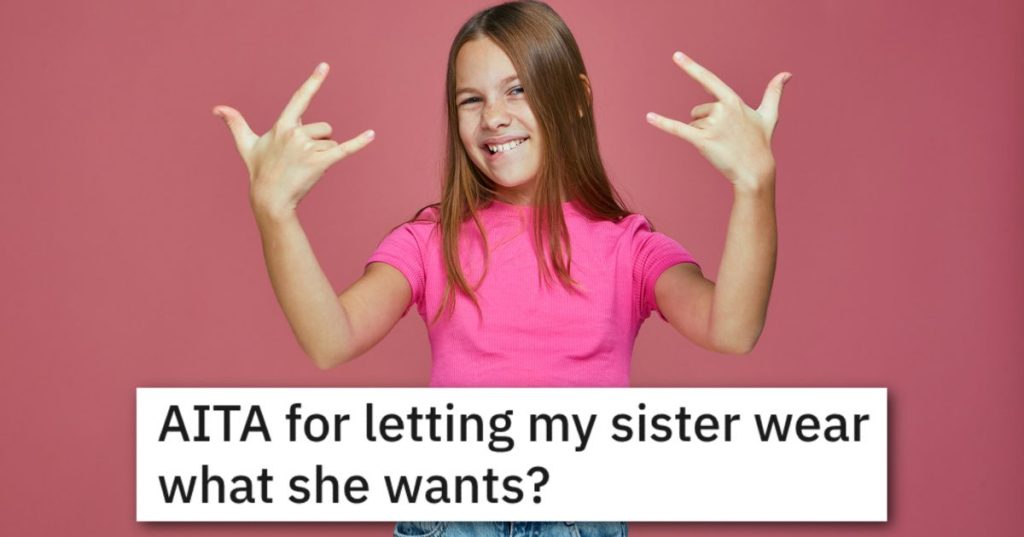 Is There Anything Wrong With Letting Kids Pick Their Own Clothes?

Part of the fun of having babies and small children is being able to dress them up. No, it’s not the most important aspect of being a parent, but kids are cute and we all love to play that up.

Once they reach a certain age and begin to have their own opinions and preferences, though, many people believe it’s important to listen to children’s own preferences when picking out things like clothes and decor.

OP is a young guardian to her 10yo sister. She’s the only mother her sister has ever known, and says that recently the young girl has gravitated toward “masculine” things like short hair and dinosaurs.

She has no issue with this.

I’m (22f) my little sister May’s (10f) legal guardian. She started living with me when I was 18 and she was 6, but I’ve honestly been raising her since she was a baby bc our mom didn’t do much and her dad isn’t around.

I’m a firm believer in letting kids express themselves, so when May started gravitating towards traditionally masculine things, I didn’t force her to do “girl stuff” I just let her do what made her happy. She cut her hair and stopped wearing dresses and things like that. We even redecorated her room as dinosaur themed bc they’re her favorite thing.

She’s only 10, and I think it would be dumb to deprive her of joy just because other people think that boys should behave one way and girls should behave another.

I’ve always encouraged her to just be her and do what makes her happy.

When her sister’s paternal grandmother reached out and asked for a meeting, OP thought long and hard. Her sister had never met anyone in her father’s family – or her father – but once her sister agreed they decided to give it a try.

Recently, May’s grandmother Ann (60f) got into contact with me and asked to see her. She’s never met May, and her son (May’s dad) hasn’t met her either. He doesn’t even have rights to her.

I did agree to let Ann meet her under the conditions that May agreed to the meeting and that May’s dad wouldn’t be present/know about it. She said okay so we made plans to meet at a restaurant.

OP’s sister went to dinner in a dinosaur shirt and shorts, and upon seeing her, the grandmother lost her cool and accused OP of somehow corrupting her.

May picked out a button up shirt with dinosaurs on it and some shorts to wear. She just looked so happy with her choices that I didn’t consider making her change or anything.

When we arrived, Ann was there, but she immediately looked bothered upon seeing May. She asked where her granddaughter was, and when I told her that my sister was “right here?” she immediately went off.

She started saying that I never deserved guardianship of May. That I’m turning her grandchild into someone she’s not, forcing her to be a boy, etc.

We started getting looks from other people, and May was clearly upset by what was happening so I took her and left the restaurant.

She also made threats about suing for custody, etc, so now OP is wondering whether or not she should have asked her sister to change her clothes.

One of her friends even thinks she should have done just that, knowing that the older woman was from a “different generation.”

I later got another message from Ann saying she plans on taking custody of May because according to her, I’m “ruining her”.

I told my best friend about it and she said that I should’ve made May dress differently before taking her to dinner because Ann was obviously from a different time and I should’ve been mindful of that.

But I feel like if I had done that, then I’d be going back on how often I’ve told my sister that who she is and what she likes to wear/do is nothing to be ashamed of.

I don’t know what to do. I don’t think I should’ve made May change her outfit just to go meet a woman she doesn’t even know. And I don’t even think that letting May be herself is wrong either.

But if it could’ve helped avoid any issues with Ann, maybe I should’ve asked May to tone it down a little? Am I an asshole because I didn’t do that?

Did OP do anything wrong? Reddit is going to let us know what they think!

The top comment says that OP should be grateful this woman showed her true colors upon first meeting. 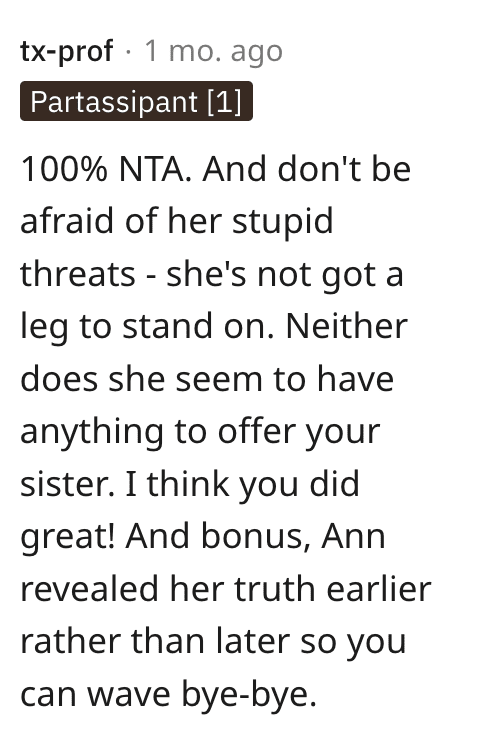 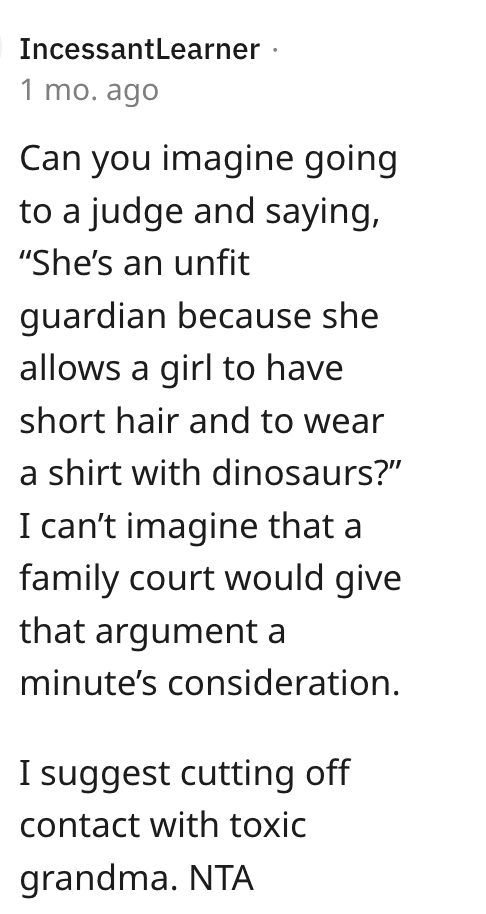 No one thinks the grandmother would have a leg to stand on in a custody case, though. 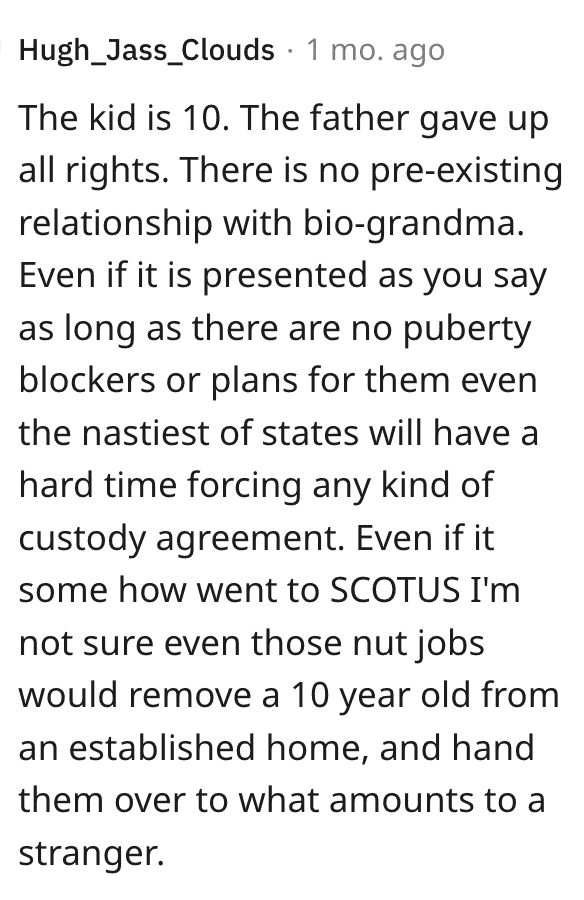 Interesting is one word for it. 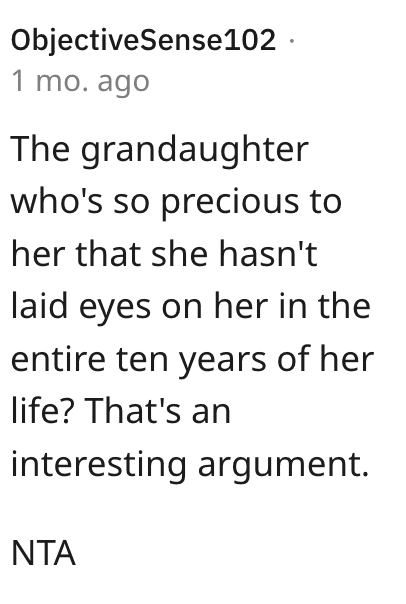 Here is your gentle reminder that dinosaurs are for everyone! 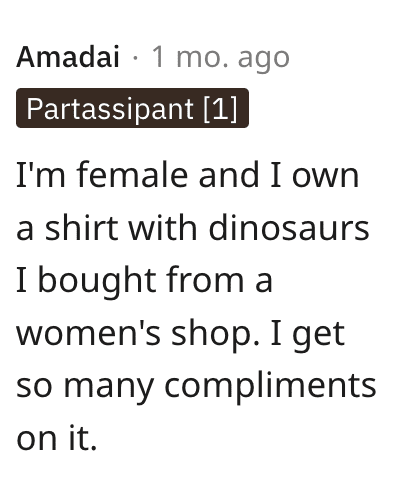 OP seems as if she is doing a great job and it stinks this woman made her question her choices.

Would you have let this old lady have it? Tell us why or why not in the comments!