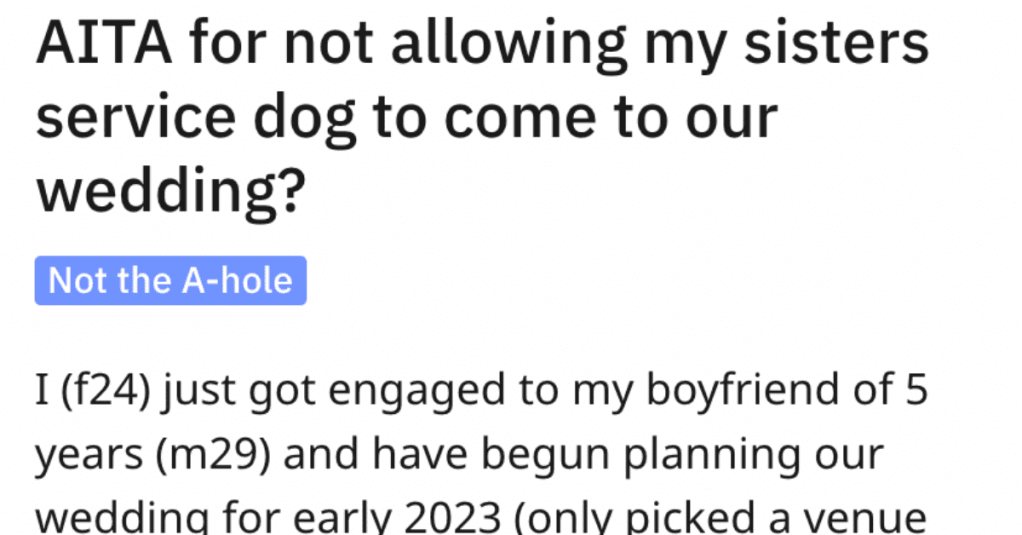 Is This Bride-To-Be Wrong For Telling Her Sister That Her Service Dog Isn’t Welcome At The Wedding?

This is one of those AITA posts that has a perfect headline, because it immediately gets everyone’s hackles raised. We all think we know exactly where we’re going to come down on this issue, but once you dig into the meat of it, well…you’ll see.

OP is a woman who is beginning to plan her wedding to her boyfriend of five years. Thus far they’ve chosen a venue and decided they would like their day to be both child and pet-free.

Her sister has a “service dog” that she’s had for about a year, a golden retriever. OP is not sure whether the dog is certified or what services he provides her sister (they’re not close), but her sister does have bi-polar depression.

When planning, we decided on a child and pet free(ish) wedding. The first hasn’t received any backlash yet (here’s hoping), but the second has become an extremely controversial subject in my family.

My sister (f21) has a psychiatrist service dog for bipolar I and depression etc. She got this dog a little over a year ago, and it’s a golden retriever.

The main issue is that the fiance has mental health issues of his own that center directly on golden retrievers.

He was attacked by one as a child and has had to attend much therapy to get over interacting with dogs in general – and has never been able to force himself into interacting with that specific breed again.

OP obviously needs her groom to be present and mentally fit on his wedding day.

My fiancé was attacked by a golden retriever when he was 11. While it wasn’t physically severe, it did affect him mentally and he had to go to therapy to be comfortable around dogs. He is now fine around all dogs but golden retrievers.

Because of this, my sister always visits us without her dog. She’s usually fine to go out if she is with our mum and doesn’t want to bring the dog, this is what my sister says not me assuming.

When my fiancé sees a golden retriever in public, he usually tries to stay as far away as possible and avoids them until they pass.

This is usually extremely distressing and he can’t be in the same area as them. Not always resulting in a panic attack, but having him on edge and in flight or fight mode.

Obviously not ideal for our wedding.

My fiancé has met this dog but it was a traumatic experience. She secretly brought the dog and kept holding the dog towards him and wouldn’t let him leave.

It resulted in a panic attack.

They told the family their preferences at their home, where OP’s parents and sister (sans dog) were there.

The dog does not visit OP’s home, for obvious reasons, and the sister is also able to go in public without the dog but with her mum.

It came out in the comments that her sister also occasionally goes clubbing with her friends and leaves the dog home then, too.

Her parents took her sister’s side in saying the dog should be allowed at the wedding.

When planning save the dates, we told our immediate family in person. When telling my family, my sister begun talking about how she would buy a bowtie for her dog to wear at the wedding.

This took place at our home and her dog wasn’t present. My fiancé brought up his discomfort and I backed him up, telling her that her service dog couldn’t come to the wedding.

I posed the idea that she come alone, like she does when she comes over to visit us. She got extremely upset by this, ranting about how we were discriminating against her and that her service dog was essential for her functioning in life.

I brought up how she was her without her service dog ‘functioning’ fine but she immediately starting crying and having a panic attack.

My parents took her side and left quickly with her still crying.

My brother took my side but that’s only because he believes she doesn’t need a service dog. I have no opinion in her dogs validity.

They’ve since tried to hash out alternatives, and it sounds like OP is being as reasonable as possible.

Her parents, however, are now threatening to alert the authorities to ADA violations and also refrain from attending as well.

My parents called me the next day to tell me that it wasn’t acceptable not to allow my sisters service dog to come along, and that it would mean she couldn’t come.

Honestly we’re not that close and she was only coming as a guest, so I posed the idea that she come for a dinner with me individually before or after the wedding to celebrate.

Now my parents are threatening to not come and claiming ADA laws against me.

I honestly think my fiancés comfort on our wedding is more important than my sister coming, and selfishly I want my fiancés focus and attention on me and our special day. AITA?

Is OP out of line here? Do her sister’s needs trump her fiance’s needs?

The top comment says no, her issues don’t trump his and also the ADA doesn’t apply to private events like weddings. 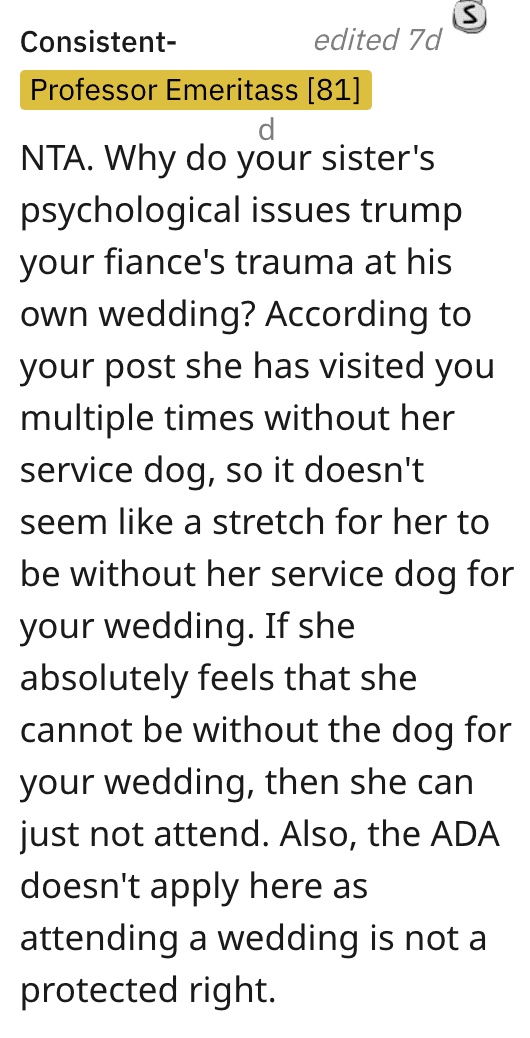 The fact that OP’s sister can go to other crowded and stressful places without the dog really sealed the deal for most people. 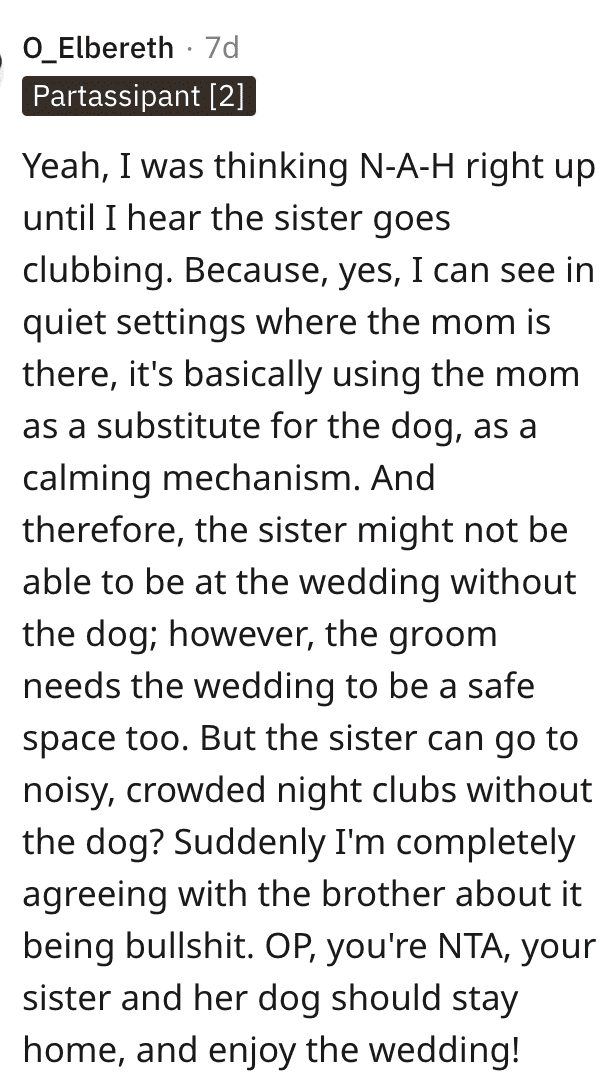 Though some commenters did point out that mental health is complex and the sister isn’t here to explain herself. 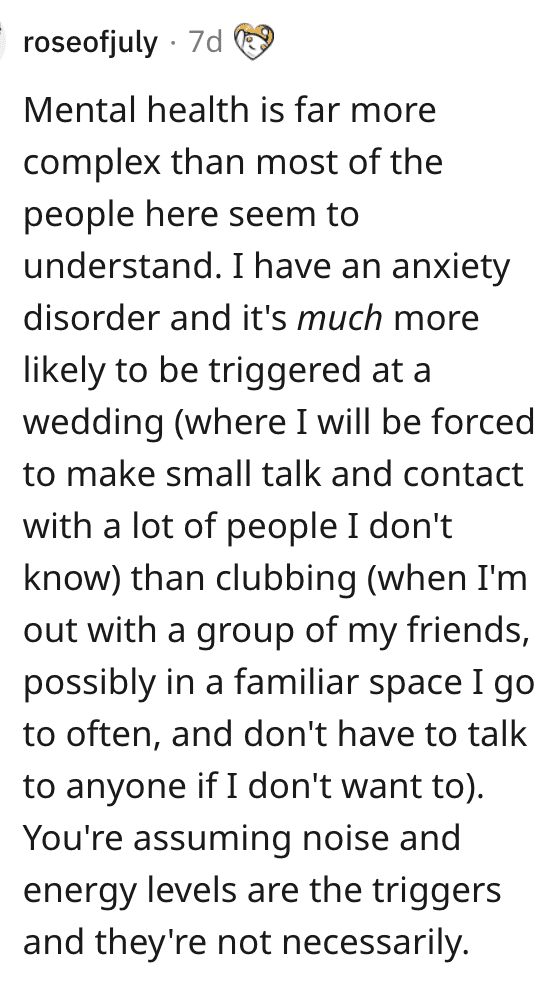 Still, the bottom line remains that the groom, who has to be present at the wedding, has issues that need to be considered as well.

There are no winners here, but OP definitely isn’t wrong. 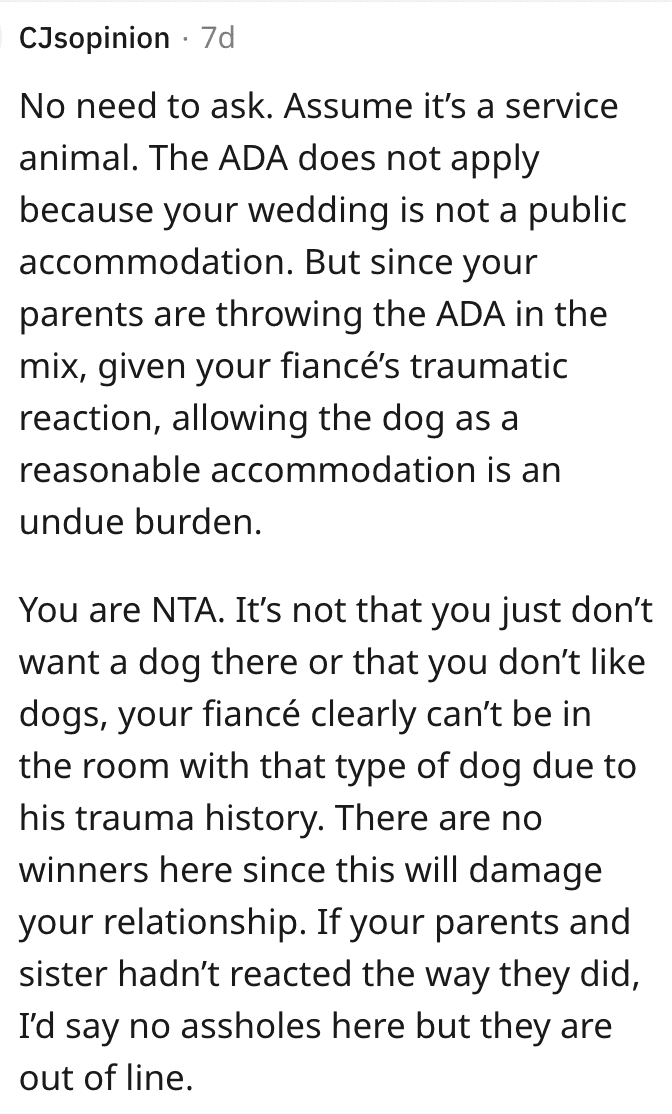 You hate to hear stories like this, where it seems as if families just can’t figure out how to treat everyone with respect and work things out like adults.

If OP was your friend, how would you advise her? Let’s talk it out in the comments!