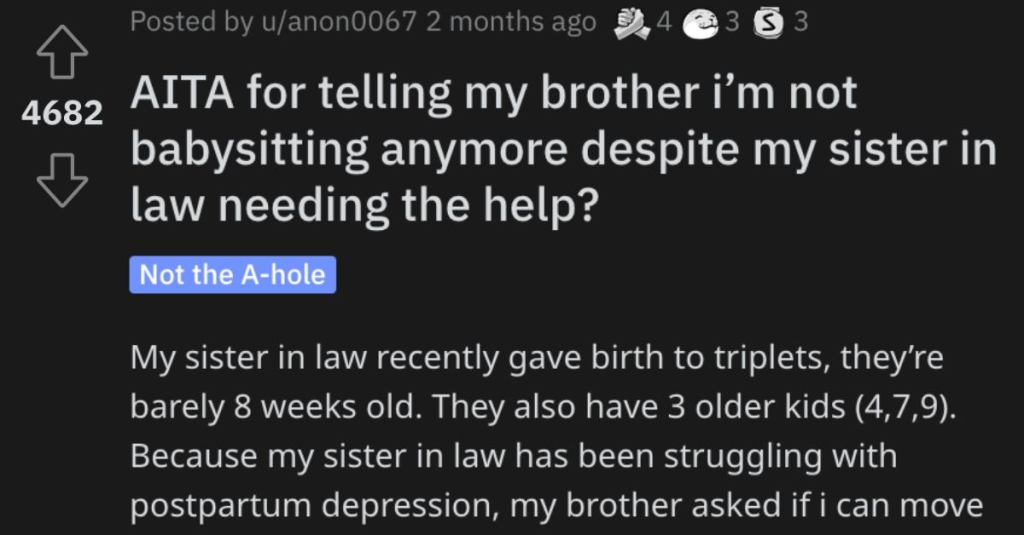 Is This Person Wrong for Refusing to Babysit for Their Brother? People Responded.

Babysitting is not for the weak, my friends…

And in this story from Reddit’s “Am I the A**hole?” page, a person wants to know if they’re wrong for refusing to babysit for their brother.

AITA for telling my brother I’m not babysitting anymore despite my sister in law needing the help?

They also have 3 older kids (4,7,9). Because my sister in law has been struggling with postpartum depression, my brother asked if i can move in to help her with the kids and i agreed. Since i used to watch the older kids while she was pregnant, it was pretty easy to fall into a routine that worked for everyone.

And everything has been fine and easygoing until recently. My sister in law started complaining about small issues, i was sweeping the wrong way, i shouldn’t nap when the triplets napped, i’m doing the 9 year old’s hair “too girly”, or she’ll get mad the triplets aren’t in matching outfits because one of them stained their clothes and needed changing while the other two didn’t.

I tried to be patient and give her the benefit of the doubt. I offered solutions like instead of me doing the 9y/o’s hair, she can and instead of complaining about how i sweep, she can show me how she prefers i do it.

When i offer solutions, she gets an attitude and walks off. This is always followed by my brother saying something along the lines of “don’t take it to heart, its her depression”

I’ve pulled my brother aside a few times and asked him to talk to her so we can find some middle ground. He brushed it off saying it’s her postpartum and she just needed more time adapting to new changes.

I tried to suck it up and deal with it but the last few days leading up to today, she was complaining for no reason. I’d finally had enough when she blew up cause i was wearing a tank top while feeding one of the triplets because she “didn’t want them to get used to my smell”. That was my breaking point and i told her to find someone else to help her since i wasn’t living up to her expectations.

My brother started blowing my phone up and said she was crying and upset and i was a b**ch not controlling myself and for leaving because she doesn’t trust anyone else to babysit and i’m putting them in a complicated situation. I feel like an a**hole now for leaving and losing my temper and feel like i’m wrong.

This reader said that the sister-in-law seems to be pretty over the top. 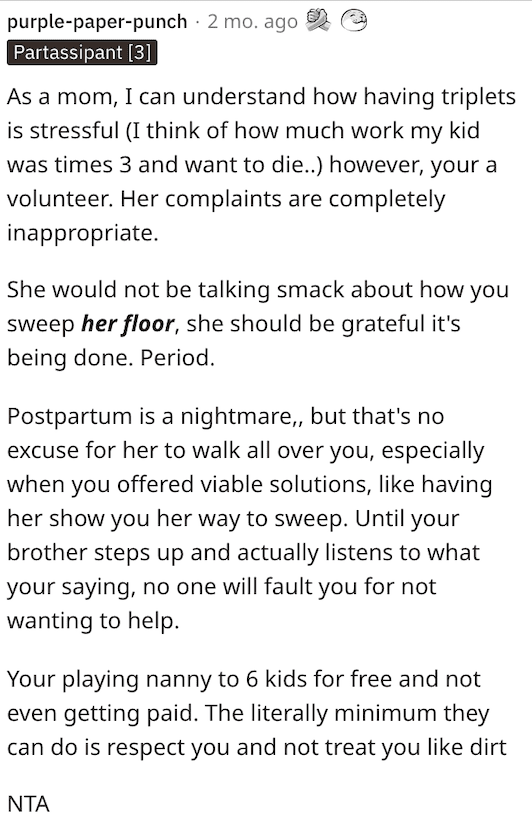 And this person said that the sister-in-law and the brother are both to blame here. 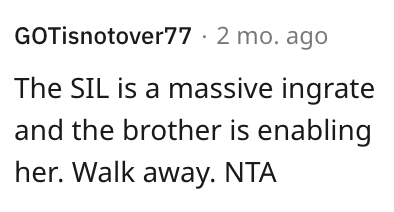 Another individual said that this person is not the a**hole and that their brother has totally misrepresented the situation. 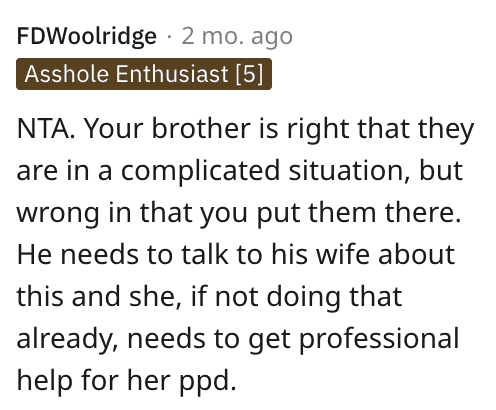