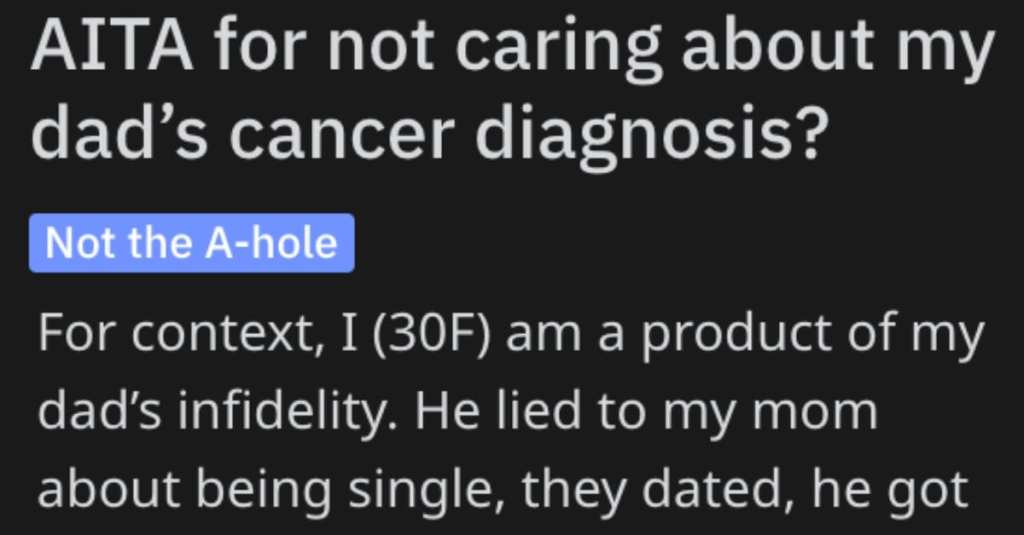 Is This Woman Horrible for Not Caring About Dad’s Cancer Diagnosis? Here’s How People Responded.

Family dynamics can be tricky and they’re all so different.

What one person thinks is normal can seem outrageous to another person and vice versa.

And people definitely develop strong feelings about their relatives based on how they were raised.

This woman shared her personal story on the “Am I the *sshole?” page on Reddit and asked the readers there for advice.

AITA for not caring about my dad’s cancer diagnosis?

He lied to my mom about being single, they dated, he got my mom pregnant, she was given a heads up about dad’s shadiness by one of her coworkers, my mom confronted him, and that was that. My mom took out a restraining order against my dad before I turned 1 because of his constant threatening to take me away, so I never met him and I’ve never been interested in doing so.

Jump forward to 2018 and my mom told me she’d found my dad on Facebook and that they’d started messaging each other. She said he was looking forward to meeting me and that she’d set up a date for us to have dinner without asking if I was even interested in meeting him.

I didn’t feel comfortable being alone with my dad, but to avoid any drama with my mom, who lives with me, I caved and had dinner with him. It went well at first, but then he started bragging about all his money and his perfect daughters. It made me shut down and feel awful about myself. After dinner, he complained to my mom that I was unresponsive and didn’t seem excited to meet him.

Knowing my mom and her tendency to side with everyone else but her kids, I was given the silent treatment until I apologized. Apparently, I ruined his dream of meeting me by not welcoming him into my life with open arms. It’s now 2021 and in the short time we’ve known each other, my dad has managed to make me feel like sh*t many times.

The last straw was when he tried to guilt me for not contacting him everyday when I’d explained that I sometimes go through low periods where I retreat and have very little contact with anyone. (I know there’s a name for it, but I’ve never been properly diagnosed because I was ridiculed at a young age by my mom for feeling depressed when I had no real problems.)

My dad refused to understand that it’s for the sake of my mental health and said I just don’t want to build a relationship with him. I cut contact with him after that because I don’t feel like I owe him anything and I was tired of all his snide remarks about me. I was fine before we met and I certainly didn’t need one more person in my life to please. I was done.

A few days ago, my mom came to me crying about how my dad had just been diagnosed with cancer. Obviously, I feel bad for him because no one deserves that disease. But my mom now thinks I’m a monster for not crumbling to my knees in sorrow at the thought of possibly losing my dad.

She’s grown very close to him again over the past couple years, so she thinks he’s this great person that was only trying to get close to his long-lost daughter, but she doesn’t know how manipulative he was trying to be with me.

My mom isn’t speaking to me anymore and probably won’t until I contact my dad. I don’t want to invite him back in though. I’m sorry he’s going through this difficult time, but that’s about it. Am I an *sshole for not caring the way I’m “supposed” to?”

This person said that the woman is not an *sshole and that she might want to consider cutting off ties with both of her parents.

Another Reddit user made it pretty clear: both of this woman’s parents really SUCK. 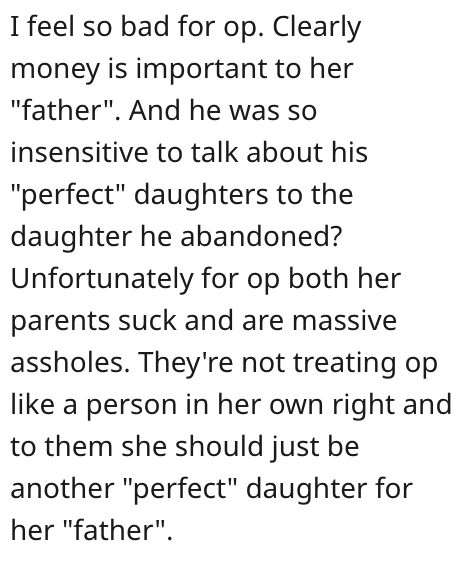 This individual agreed that the woman’s mother is also a manipulative person. And the dad just seems downright selfish. 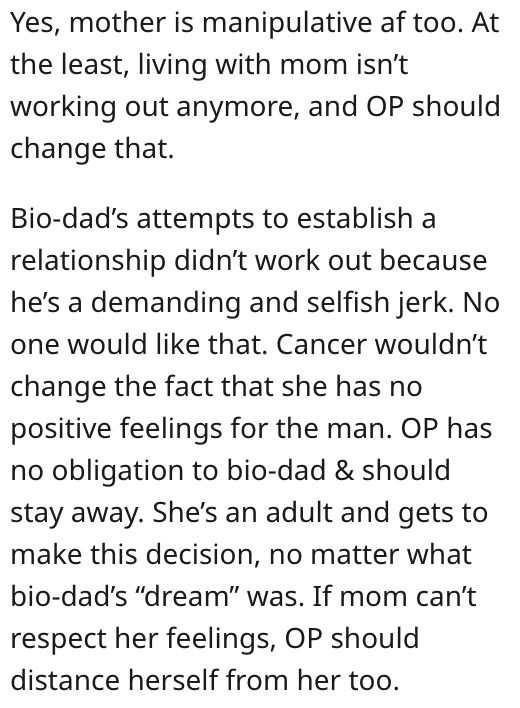 This person said that the woman might want to consider building her own support circle outside of her family and that this really does seem like a nightmare situation. 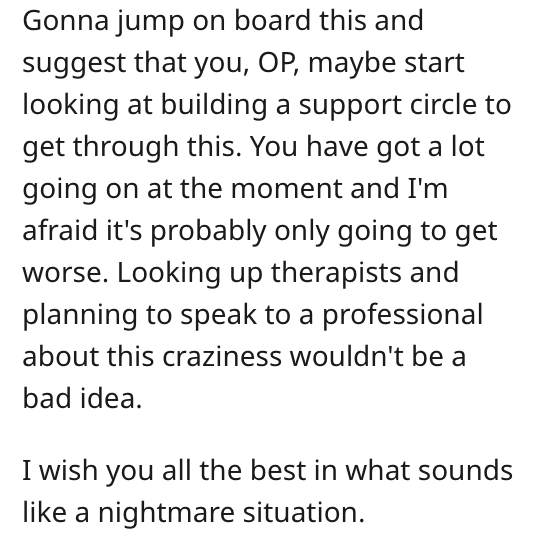 Finally, this reader argued that just because this is her biological father, it doesn’t mean the woman owes him anything. 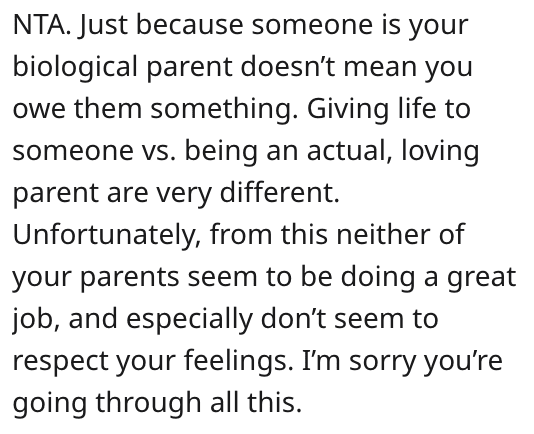 What do you think about how this woman is reacting to her father’s cancer diagnosis?