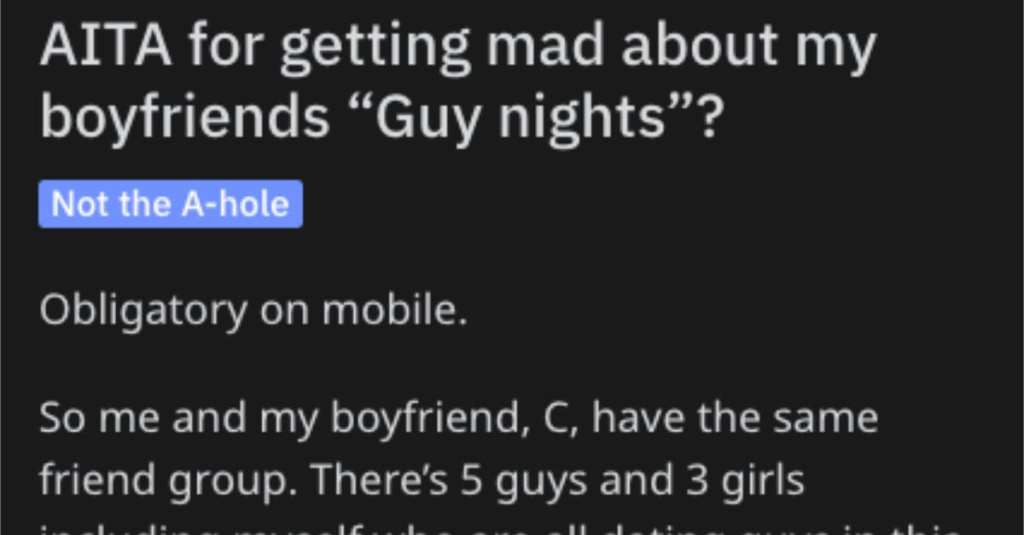 Is This Woman Wrong For Being Mad About Her Boyfriend’s “Guy Nights?”

Relationships are hard, y’all. Anyone who tells you differently is either lying or they aren’t actually emotionally invested in the relationship at all.

I said what I said.

Which is not to say they’re hard all the time, but you know. It’s not always easy.

This girl is finding out that struggles can unexpectedly come out of nowhere now that a friend has become a boyfriend, and everyone is going out to have fun without her.

So me and my boyfriend, C, have the same friend group. There’s 5 guys and 3 girls including myself who are all dating guys in this group. For context I was introduced to the group 4 years ago and I started dating C over a year ago. He joined a year before we dated. Anyway onto the story.

They’ve all been friends for awhile, and OP is closer to the guys than the girls, but still, they don’t want to invite her along – because if she did, all the girls would be invited.

And no, it’s not every couple of months. It’s all the time.

So the boys in my friend group have started a thing called “guys night” where they go out and do everything we all do together but without us girls. Here’s the thing- ALL of my friends are the boys. I don’t know the girls in the group too well and while I have friends outside the group I’m no where near as close with them as I am this group.

They say they need to “spend some quality time with their friends” and that if I went they’d have to invite their girlfriends. And it’s not every so often, it’s every 2 weeks on a Saturday, which is the one day I can go out. So basically while my boyfriend goes out with all my friends I have to be stuck at home by myself. And what’s worse is when we all do hang out they constantly bring up stuff that happened on guys night saying “you had to be there”.

This had been going on months.

She got upset when he was giddy about another night out, and refused to take her along or just spend the night with her instead without even thinking about it.

Last night my boyfriend came over to mine from guys night really happy and was texting his friends when I asked him why I couldn’t go. He made a vague gesture at my chest and crotch saying I wasn’t a guy. I then asked him why he couldn’t skip it to spend the night with me and he rolled his eyes. I lost it.

I started crying and screaming at him calling him an asshole for allowing me to be completely isolated when I’ve told him how shitty it is. He ended up leaving and called me a bitch.

He’s staying with one of our friends who’s saying I was being the AH for yelling at him that way. The girls all agree with me though and I don’t know if I should apologise.

OP made an edit to explain that she’s not being possessive, and it’s fine if her boyfriend has hobbies, she just doesn’t want to constantly be excluded because she’s not a dude.

EDIT: I feel like everyone is confusing what I’m saying. I’m not mad he has his own hobbies- that’s amazing!! I’m just upset that I’m being excluded because of my gender from my friends who I introduced him to. I’ve been told explicitly this by him and his friends. Also we don’t live together and I only see him a few times a week.

And another one to say it’s not like he’s deprived or always working or anything.

EDIT 2: I should also add my boyfriend sees all his friends during the week but they schedule guys night on the one night I can go out. As I said in a comment I see him 2-3 times a week and he sees them at least 4 times, 5 on guys night. I see my friends once a fortnight.

TLDR: boyfriend goes out with my friend group while excluding me completely. I lost it at him and now I’m being called an AH

My gut reaction is that there are tons of red flags and this girl is not wrong, and there are plenty of commenters who agree with me. 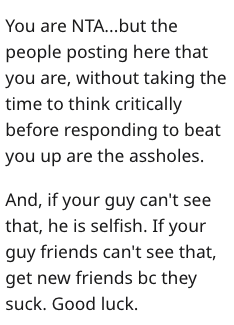 She probably needs to reassess her friendships…and her relationship. 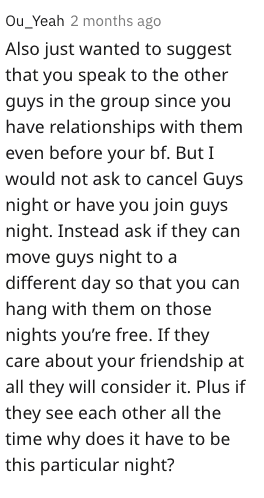 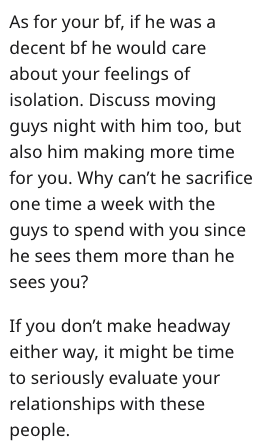 More than a few, though, voted that everyone sucks here. 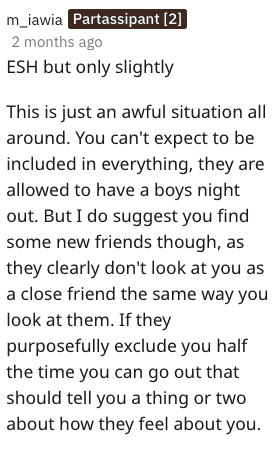 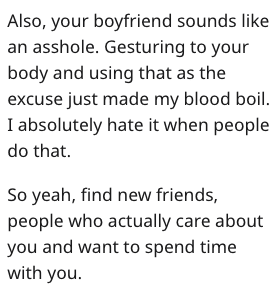 Something about the whole thing stinks, don’t you think? 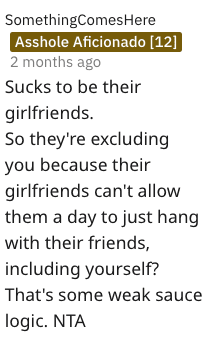 There were plenty of people who thought she was overreacting too, though. 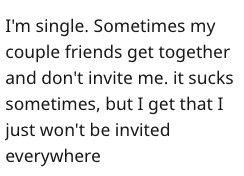 This one is more divisive than many posts on AITA, which makes it pretty interesting.

What’s your take? I personally think she’s better off finding a new boyfriend, but I don’t know….tell me what you think in the comments!