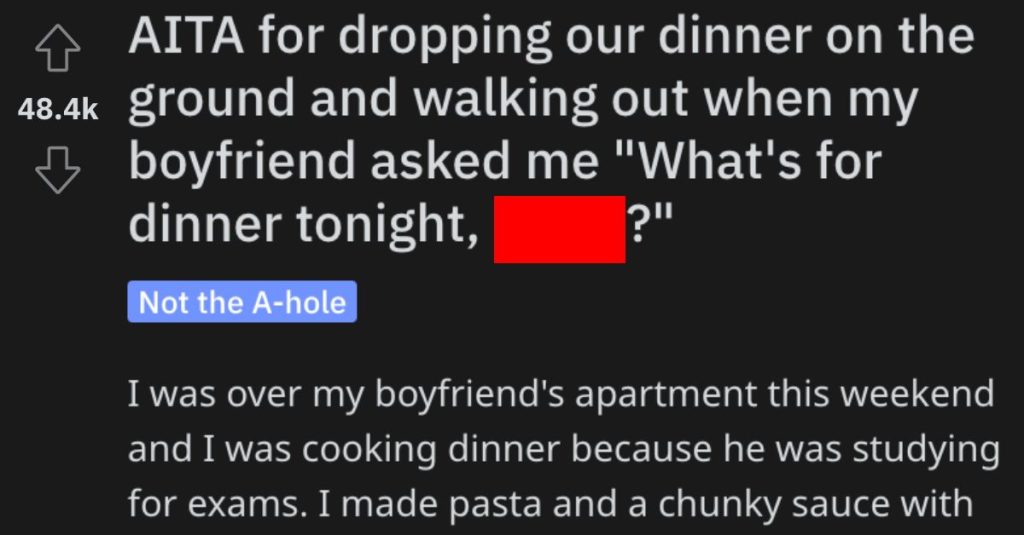 Is This Woman Wrong for Dropping Her BF’s Food on the Ground After He Insulted Her? People Responded.

That’s about the only advice I can think of to offer this woman when it comes to her boyfriend.

Because, quite frankly, this guy sounds like an a**hole.

But now we want to know what you think.

Read on to get all the details!

AITA for dropping our dinner on the ground and walking out when my boyfriend asked me “What’s for dinner tonight, b**ch?”

“I was over my boyfriend’s apartment this weekend and I was cooking dinner because he was studying for exams. I made pasta and a chunky sauce with meatballs and veggies. I told him dinner was ready and he goes “what’s for dinner tonight, B**CH” … With like a lot of emphasis on the last word.

I was fed up, I’d had a pretty rough day with work and I have some awfully bad associations with that word being used by other people in my life who were pretty abusive. So I was so irritated that I dropped the pot of pasta sauce I’d been carrying right on the ground and was like “Well nothing’s for dinner tonight now. And I better not hear you using that word again, it’s for the girls”

He was freaking out about how sauce had landed on his rug and he even said “you’re seriously acting like a b**ch right now, I dunno what else to call it”

I just walked out and got takeout for myself and went to my friends house. She thought it was funny but my boyfriend was furious, he kept texting and calling and sending me voice memos trying to explain that saying “what’s for dinner tonight b**ch” was a TikTok trend…. And that he was just quoting something as a joke to put on tiktok.

I thought that was the s**ttiest excuse ever, it doesn’t matter if he saw it as a joke, or stole the “joke”, it was still disrespectful.

But it didn’t change the fact he thought that s**t was funny, to demean me when I was trying to do him a favor. Like hell I came over when he was studying to make a home cooked dinner and he decides it’s time for jokes? So I put my phone on don’t disturb for the night and split a bottle of wine with my friend and her roommate.

The next morning he was sending me angry texts demanding I clean his rug because he was too busy with exams to do it. I was shocked he left it overnight, that’s disgusting. I texted him back saying.

“Yeah so that’s the btch tax honey 🙂 leave me alone till you’re ready to handle your own cooking and cleaning because this b**ch isn’t anymore. Also it’s vile you left that soaking in all night”

He called me and told me that he was okay with doing his own household work, but I did throw a full pot of sauce at the ground so that’s on me to clean up.

He told me he didn’t and it was just a “trend” and I got p**sed off he was playing that “TikTok trend” BS excuse again and I told him “Well I’m starting a trend called ‘saucing’ where as a little joke people throw pasta sauce around! You can’t be mad because it’s just a little trend, a little jokey joke, just a little prank bro!”

AITA for how I reacted when my boyfriend asked me “what’s for dinner tonight, b**ch”?”

This person said she’s NTA and they were very impressed with her response.

Another Reddit user said at first they thought she overreacted but then they changed their tune. 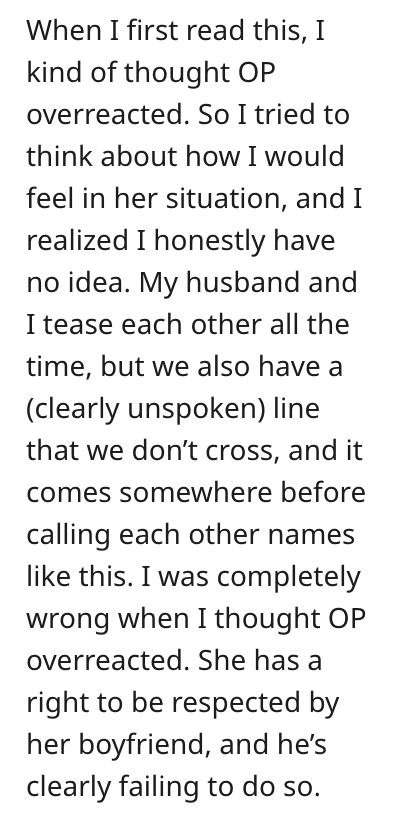 And this individual said she’s NTA and that she needs to dump this guy.